My favourite Canal Peg? ... A simple question but with by no means a simple answer. Having written many technical articles and papers in scientific press this question has required more thought and changes of mind than any I can ever remember.

Current club, team or sponsor: Southport DAA, though I am also a member of Wigan DAA and PAC (Lancaster Canal)

How old were you when you started fishing?: 4 or 5 years old going with both parents and my two brothers

Which was the first canal you ever fished? At which location?: Lancaster Canal in Preston (just 5 minutes walk from home)

Which is your favourite species of fish?: Bream (though tench come a close second)

If you had to choose just one, which would be your favourite fishing bait?:  Currently worm, but in the past I could easily have chosen hemp and/or caster

What do you consider your greatest fisheries or angling achievement?: Nothing major but many small and personally satisfying achievements along the way. I would say now that it is running, alongside brother Steve, an annual match series on the Lancaster Canal that draws many of the region’s top anglers.

What is your remaining biggest single ambition in fisheries/angling?: The biggest ambition has to be to make a difference. By that I mean to help to create an environment where all can enjoy their beloved sport by working with all relevant parties. I want to continue to regenerate interest in match fishing on the Lancaster Canal and also to see youngsters enjoying their fishing in more “natural” environments.

Who is your all time fisheries or angling hero and why?: I’ve fished on the same circuit as many great anglers. The likes of Kevin Ashurst,  Ian Heaps, Mark Addy, Vinnie Smith and the sadly late Alan McAtee all spring to mind. In this instance though I must keep it in the family and say cousin, and former world champion Dave Roper. Apart from his 1985 success on the River Arno in Italy, Dave was a stalwart on the northwest canal match circuit and he captained the Izaak Walton Preston match team for many years. He also ran a series of evening competitions on the Lanky each year, which became the inspiration for our current Tuesday evening series held each summer.

It was always said that if you can catch fish on the Lanky you can catch them anywhere and indeed it was, and is, a fantastic place to learn your craft and hone your skills.

I have lived all my life in Preston and for the most part of that time within a five-minute walk of the Lancaster Canal so it will come as no surprise that the final choice comes from what remains my favourite water to fish. I say a five minute walk, and indeed that’s how as kids, along with my two brothers we used to get to the canal along with our wicker baskets and split cane rods. In those early days we would also be accompanied by our parents who introduced us to fishing and I would say are responsible for us enjoying and continuing to enjoy a lifetime of intrigue and pleasure.

I remember very well how I used to delight in catching a perch or an eel on a worm dangled under the rod tip. Hooked… me that is, not the fish!

Later we used to get on our bikes and travel further along the canal and particularly spent many happy days catching bream out of the famous Salwick Basin. If I did that now I’d probably need ten journeys to get all the tackle there …yet we seemed to have enough!

Interestingly, brother Steve and I used to often learn our trade on the Lanky by literally limiting ourselves to a handful of bait and seeing what we could catch. 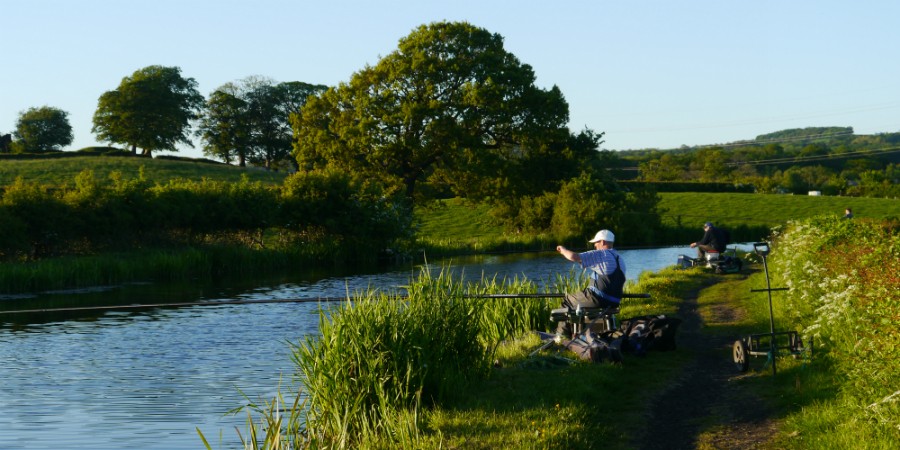 It was always said that if you can catch fish on the Lanky you can catch them anywhere and indeed it was, and is, a fantastic place to learn your craft and hone your skills. Even the non-catching days, for there were many of those too, were still enjoyable, because I say, without fear or favour, that the Lanky is one of the most beautiful and pleasant canals to sit and fish or to just pass the time of day. There could be views of the Bowland fells, or it might be Morecambe Bay, or the fantastic River Lune aqueduct.

Nowadays of course the whole of the Lancaster Canal is open to us in the car though I mostly concentrate my fishing between Preston and Garstang, and it is from within this area that I have chosen my favourite peg. Those that know me will probably be surprised by my choice. I could so easily have chosen the peg which only last year I had 113lb of bream out of. Just a narrow and shallow section in Catforth that has produced several other nets for me of over 30/40lb. I very nearly chose the peg which everyone would walk past near Woodplumpton that several years ago produced 40lb of roach in the middle winter on hemp!! I so nearly chose the peg near Salwick from which I won my first Lancashire Winter League match with just 2½ lb of roach on caster. So hard was the fishing back then that everyone thought I’d got 2½ oz when I said what I’d caught.

My favourite peg is however again one from which I won a match. It’s actually fairer to say it’s my favourite area as well. Parking up on the roadside at Dimples Lane (Bridge 58), I can honestly say that within just a short walk there are at least 4 pegs, any of which I could have chosen as favourite, and from which I have had many excellent catches of fish over very many years. The area is just on the outskirts of the village of Garstang which has plenty of excellent places to enjoy the local fayre and beverages should the fishing not be so good. Rarely have I ever had that pleasure! Much of the canal here is facing open countryside and with also a view of a ruined "castle". The pegs here aren’t numbered but walking easterly 150m towards Castle Basin one peg just on the bend has produced for me dozens of big roach catches on hemp and caster, including fish to 1¾ lb. Walking Westerly just 70m from the bridge is a peg that has produced many big bags of bream and hybrids. Walking another 150m through the bridge is another peg where for many years I have failed to catch less than 30lb whenever I fished there.

But the peg I’ve chosen is back east and just a short 70m walk from the bridge towards the castle. 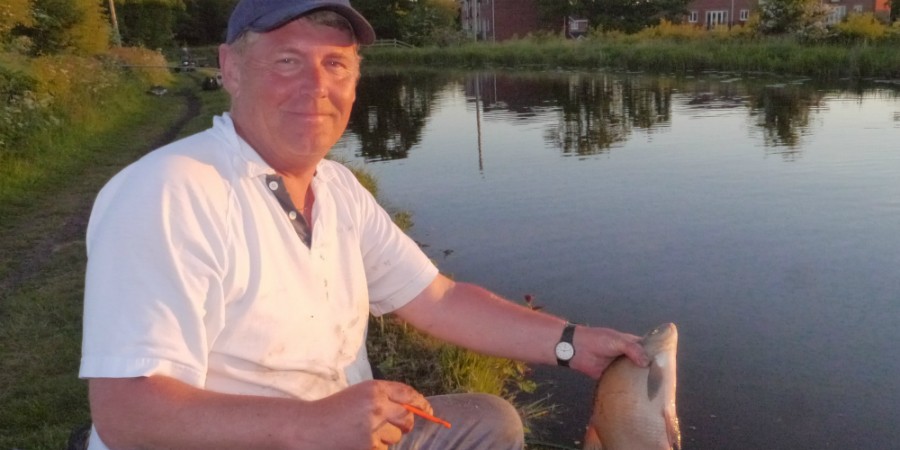 It wasn’t a big event but it produced a fantastic peg to peg battle in what was just a three hour evening match. It’s a peg that has form but the omens were not good as it had been an extremely hot day and whilst pegging out the match shoals of roach and small skimmers were just basking on the surface. "It will be a roach match, the bream won’t feed" was the infamous comment beforehand. That being said I still had to "attack" two lines at 13m across to the lilies. One line with a copious mix of licky, squat, caster, hemp and chopped worm with other line fed lightly with just a small cup of licky and squat. After 30 minutes I was thinking I’d made a mistake but a few blows were beginning to show and I then slid the net under a nice 2lb bream that had taken my maggot and worm cocktail. From then the skimmers and bream kept coming steadily along with a few eels, though with bright and setting sunshine directly in my eyes seeing bites was difficult.

At times, I could hardly make out the float in the middle of the now "jacuzzi" that was blowing fish. I knew it wasn’t just me catching as I’d seen the net going under a lot of fish to my left as well.

At the end of the three hours Chris Gorrell had 22lb, then next to him, Carl Robinson had 28lb, and I tipped the scales at 34.5lb which at the time eclipsed the three hour and match record on the Lanky. Wow what a match! And unusually a photographer was the capturing the action all the way through.

The photographer was the fishery manager from the Pike Anglers Club (PAC) who had just taken over the running of the canal and he’d come down to see what the fishing was like in our matches. The PAC have taken on the lease on 35 miles of canal from the Preston end right the way up to bridge 118 at Hest Bank including all of the Glasson Dock Arm.

All of this you can fish for just £20 per year (or £15 concessionary). Juniors under 18 can fish for free though they still need to get a permit. Day tickets are also available at £4 but must be purchased in advance.

Permits are available online from the PAC website and are also available from the following outlets: