My favourite fishing peg is peg No 38 on the Nottingham Anglers Association controlled length of the Erewash Canal.

John Johnson on the Erewash Canal

Greatest angling achievement: Part of the Nottingham AA team that won the Division 2 National Championship in 1978

Angling ambition: To see the Erewash Canal back to its former glory following recent pollution

Angling hero: Ivan Marks - a great all round angler

My favourite fishing peg is peg No 38 on the Nottingham Anglers Association controlled length of the Erewash Canal. Not long after the end of World War 2 and at the age of just five, my father decided I was old enough to begin to learn to fish. I was just one of many hundreds of local young nippers who first learnt to fish on the canal in that part of the world. One of the very first areas I visited with dad on the canal was what is now peg number 38. 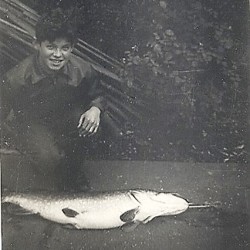 The peg just above Greens Lock in the Ilkeston area is nothing special to look at. Mr Crabtree would probably not have given it a second glance. The peg itself is located just upstream of the lock. There is a willow tree on the far bank, but it’s certainly no flyer and a peg that some days can be very stubborn and fail to produce much yet on others occasions seems full of fish of all sizes. That I suppose is the joy of fishing, if you caught huge nets of fish every time you ventured out, you would not appreciate the good days.

Being just a 30 minute bike ride from home, I soon learnt of methods to fish and the fish to catch. The peg began to give up its secrets as I fished it more in the passing years. My dad was a great teacher. He taught me to fish with fine lines and small hooks in order to get as many bites as possible. There were no poles back then. The rods we used were 10 foot in length and made of cane. Our floats were home-made affairs with Balsa bodies with bristles from a brush usually painted black. 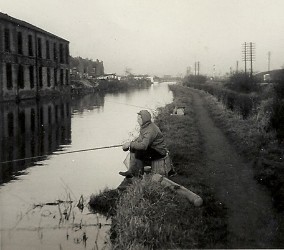 The canal back then was far different from how it looks today. When I was growing up its water was inky black in colour from the discharge from the dye works at Langley Mill. Despite the colour, there was even more weed back then with few leisure narrowboats to help disturb its growth. In the 1940s and 1950s, the only boat traffic I can recall was the occasional coal barge transporting its cargo from the top end of the canal passing through to the River Trent at Long Eaton via Trent Lock.

Bagging up on gudgeon

When I was a boy the canal held large shoals of obliging gudgeon with some perch, chub and large roach for good measure. I have to confess that the gudgeon were the main attraction for me as a youngster being eager feeders and there in good numbers resulting in the float going under many times each day. Nothing beats he excitement of a float disappearing beneath the surface.

My fishing career began just after the war. It was a time of rationing throughout much of Europe including here in the UK so bait availability for fishing was naturally limited. Bread was my dad's favourite canal bait and together with a homemade white groundbait those greedy gudgeon loved it. I had some memorable all gudgeon catches in my young days as I learn more and more about this peg.

As the years passed by and with more experience, better tackle and the eventual acquisition of a carbon pole I found shoals of roach, chub and the odd bream could be caught from my favourite peg too. With an increase in perch numbers, the gudgeon that gave me so much fun in my youth began to become something of a rarity in my catches. 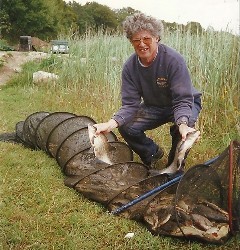 I still love to fish this peg whenever I can and still have some good catches even as I approach my 70th year. Each time I fish the peg it takes me back through the years to memories of my dad and myself biking to the venue usually in the rain, catching a nice net of fish and going home hungry and tired after fishing for some badly needed dinner. They were magic days that I shall never forget.

The water is rented by Nottingham AA from the Canal & River Trust with day tickets available from the patrolling bailiffs and local tackle shops. Parking is on the street – Green Lane, Ilkeston and it’s just a short walk to the canal.