In his inscription on the front free end paper Jack has kindly written: “Swim feeder invented by a member of the Early Darnley Angling Society.”

I was more than interested by this inscription. Could this possibly be true? I decided to scan through from January 1949 to May 1951 for any mention of the feeder. Quite by chance I stumbled across the "Competition News" where it mentioned the aforesaid Earl Darnley AS. The date was August 1949 and it went something like this:

”It is interesting to note that the Earl Darnley were using the "R.F." Swim Feeders, and there is no doubt that the accurate ground baiting which can be done with these swim-feeders gave them the advantage over the clever Waverley team, for they brought 22 fish to the scales to the Waverley’s 15."

This means the swim feeder was a common place accessory for members of this Hackney club as early as August 1949. At the bottom of the page was the advertisement for the "dual purpose Feeder that will both FEED and FISH a swim simultaneously. Price just 10 shillings."

A little earlier in the same month there was a Sowerbutts advert for a 16ft match rod "ideally suited to use with the RF swim feeders and Gentle droppers." So not only were they used by the Earl Darnley AS but were well known to tackle dealers. I turned back the pages to July. Once gain the mystery “R.F.” swim feeder popped up but this time for "Fog Dust Anglers!" The mystery deepened. Then came “R.F.” Feeder Supplies of 43, Dalston Lane, London E.8. Then nothing, nothing, nothing. So July 1949 could be the earliest date that the “R.F.” swim feeder appeared in print. 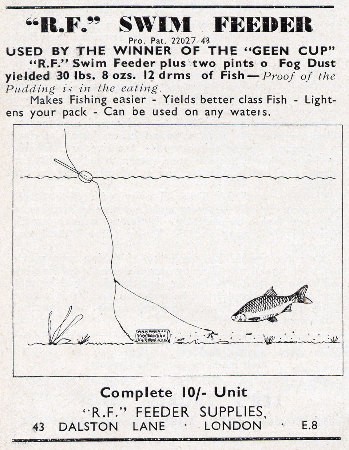 I did a fast forward, and then the real crunch came in October 1949 with an advert and a drawing of the “R.F.”swim feeder - “Provisional patent 22027/48 as used by the winner of the Geen Cup”.

Now the Geen Cup was a major London Anglers association trophy, presented in memory of Philip Geen, President from 1884 to 1922. The winning total was 30 Ibs 8 ounces - a phenomenal weight from the Thames at the time. Two pints of “fog dust” ground bait were used with the feeder. And from the illustration, the feeder was just a subtle way of delivering bait into the swim and it shows the feeder used in conjunction with a float.

Now that’s something else!

The Phillip Geen individual trophy was won by V Corsi of Earl Darnley AS with more than 6lbs to spare over his nearest rival. Not surprisingly the George Plummer Shield team winners were Earl Darnley with a team weight of more than 43 lbs. Amongst the team was an F E Wiles. This name rang bells and I remembered seeing it in Jamie Maxtone Graham's fishing tackle patents book "To Catch a Fisherman".

Sure enough on page 245 was patent 22027 granted on August 20th 1948 for a "perforated container filled with ground bait attached to a fishing line so as to lie behind the hook bait. The container is an open-ended cylinder of celluloid weighted by a lead strip." The patentees were R A Maslen and F E Wiles. Have you spotted the connection? I assume they took the letters of their first names to name it the "R.F." swim feeder.