The early history of match fishing

One of the topics I have extensively researched is the early history of match fishing, so it seemed a pity not to share it with a slightly bigger audience. So here it is, compiled especially for Canal & River Trust readers.

I don’t know when the first match was fished, nor do I think anyone really knows when competition fishing first broke away from fishing for the pot. A friendly wager with a trusty companion, keen rivalry between village or pub teams, factory workers or maybe those 'cracks' eager to win money from the less experienced anglers in their midst. Maybe it was Izaak Walton who, when arranging to meet Venator the following day, said, "Tis a match, Sir."

On 13 April 1846 (there was no close season then) a match took place between the Hulme Anglers Society and the Warrington Anglers Society on the River Weaver. This may have been the first match to have stewards appointed, for there were six scrutineers and an umpire to watch over proceedings. The stake in this match was for £5 a side and a special handbill was printed to commemorate the event. Sadly, the result is not known. This match was, however, claimed to be the "first match that ever took place between two Anglers Societies of Bottom Fishers in the Annals of Angling History".

What is clear is that angling and angling clubs centred around the public house, and why not? The publicans of old were very streetwise and soon caught on to the idea of running their own benefit matches. There were plenty of prizes for the competitors of course, but equally as much in beer and food sales for the landlord and his renowned tavern. It’s what modern management might term a win-win outcome.

By the mid-1850s, many clubs and associations were springing up, mostly around the industrial north in the big cities of Lancashire and Yorkshire. If an angling club was founded by a group of workers it was odds on that the headquarters would be at the local tavern. Many clubs associated with pubs adopted the house name, such as the Jolly Anglers, Golden Trout, White Swan Piscatorials, Black Horse, Indian Queen, Kings Arms, etc. 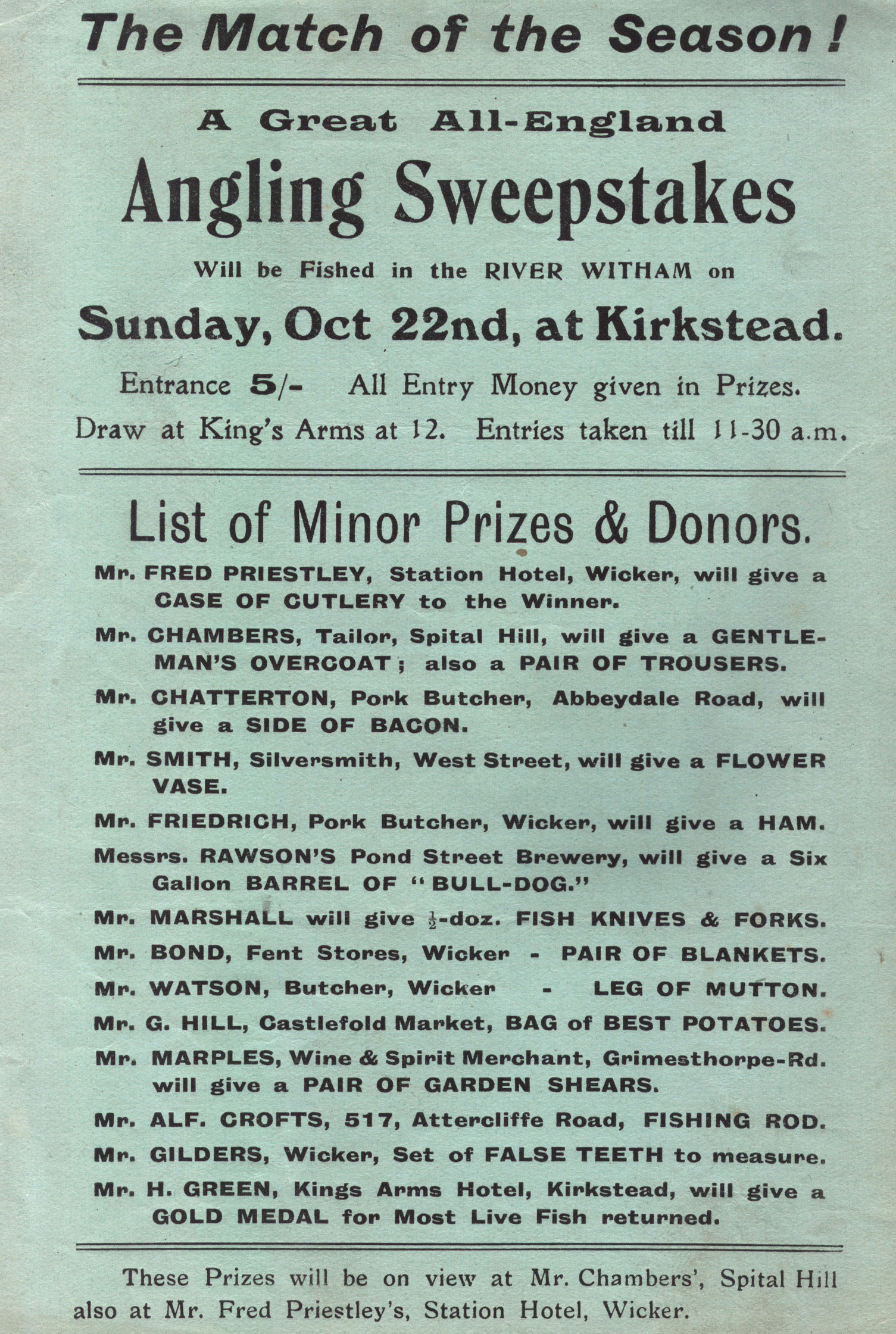 Prize lists were enormous and hordes of useful household goods adorned the flagstaff at the chosen venue. The traditional copper kettle, a barrel of beer, pewter, crockery, teapots, false teeth and the like. Hams, mutton and beef proved a mouth-watering temptation for the eager punters, keen to pay their shilling entrance fee. For that they received cheese and beer in abundance and some took in so much ale that the match was only of secondary importance. For them it was just a blur or an afternoon snooze.

Sometimes the ponds were so small that the match was fished with anglers shoulder to shoulder, approximately three metres apart, in a series of short one- to two-hour sprints. In those days, the best weight took the top prize and often this went to a bag of small fish or even a single fish from these under-stocked holes in the ground. The prize presentation over, any money winnings were used to fill up the copper kettle with beer or whisky and a great time was had by all, including the landlord.

The southern counties 'rover' match was one where, if you knew the water and managed to get an early draw, then the chances of securing a good peg and therefore a 'frame' position, were always on the cards. Pegs were staked out on the bank as usual. The first name out of the draw hat had the choice of swim and so on. ‘Travel light and fast’ was the motto in those early days.

Prizes were 'in kind' rather than cash but the heady days of big cash prizes soon crept in. The Barnsley Fitzwilliam Club ran a match in 1877. The top prize was 27 shillings (£1.35) followed by a mirror for second prize and then 14 shillings. Other valued prizes included a sewing machine, a live pig, clocks and bottles of whisky. Very much what we would today call a 'fur and feather'.

In 1881 the Borough of Middleton Angling Society advertised in the local Albion newspaper about a contest they were holding. For a small club they drew an astonishing number of entries, over 100 at a shilling per head. So successful in fact that they ran the contest monthly. The anglers arrived for the match by local train, horse-drawn bus or by foot. In those days, they were less burdened than we are now. Most only carried a single rod and a small willow creel or haversack. A "Mrs Wellens" donated a copper kettle to the match winner for many years.

One of the first national matches to be organised was by a newspaper periodical of the time. In 1894 the editor of the Scarborough-based weekly publication, the 'Angler' magazine, ran a match on the Yorkshire Ouse near York, with the winner’s prize a whopping £50. Over 800 anglers competed in that inaugural, but the top weight was a disappointing 3lbs. Nevertheless, match fishing was proving to be very popular, with up to 100 arranged matches mentioned in 1894 in that one magazine alone. Match fishing was here to stay. 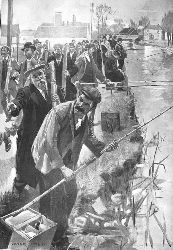 Tales of woe on the Lee

Many London Anglers Benevolent Society competitions were held on the River Lee at Broxbourne and one 600-pegger gave rise to this short doggerel rhyme:

"Six might a record make, and ten have a decent take,

"But there’s no blessed chance for this six hundred."

The modern diehards on the Lee Navigation would tell us nothing much has changed.