Dick Walker was arguably the most influential angler, not just of the past 100 years, but of all time. He brought a scientific approach to the sport that is taken for granted now, yet in the 1950s and 1960s his approach revolutionised fishing.

Dick was born in 1918 in Hitchin, Hertfordshire. His father, who taught him to fish at an early age, was a soldier and his mother an employee of the post office. After school in Saffron Walden and Letchworth, he went to the University of Cambridge, which coincided with the outbreak of war. He worked for the Royal Aircraft Establishment based at Farnborough during the war years. 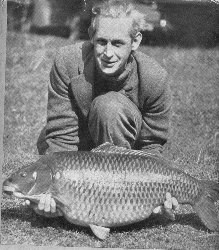 Walker was the complete angler, equally at home with fly-fishing for trout, legering for barbel or using 1lb line and a tiny float to tempt big roach. However, he is best known for catching a 44lb carp from Redmire Pool in 1952 that shattered the British record by almost 13lb.

For many years the fish, christened Clarissa (though Walker called it Ravioli) was in the aquarium at London Zoo. That fish went on to inspire a generation, and today’s modern carp anglers owe a huge debt to Walker for proving that big carp weren’t, as many thought, uncatchable. He is recognised as the father of modern carp fishing. That 44lb common carp also made Redmire, a three-acre lake near Ross-on-Wye, Herefordshire, internationally famous.

Walker’s record stood for almost 30 years and was beaten by a 51lb 8oz Redmire carp caught in 1980 by Chris Yates. Yates was using a Mark IV split-cane carp rod that Walker had made in 1955, and he dedicated his first book, 'Casting at the Sun', to Walker, calling him: “A more complete angler than Walton.”

The Mark IV that bears Walker’s name is perhaps the most famous of all fishing rods. Walker designed it to handle the outsize Redmire carp and many anglers still fish with one. It is still being produced by various makers, though the few made by Walker’s own hand sell for thousands of pounds.

Walker wasn’t just a one-trick pony, either. As his book 'No Need to Lie' documents, he caught massive fish of all species. These included chub to 6lb 14oz, masses of 2lb roach including one of 3lb 4oz, rudd 3lb 3oz, 12lb 12oz barbel, rainbow trout 18lb (which would have been a British record at the time if Walker had bothered to claim), brown trout 12lb, seven dace over 1lb, the best 1lb 5oz, perch to 4lb 13oz and even a 4oz gudgeon (from Redmire).

He developed the Arlesey bomb to reach big perch at distance in a lake near his Hertfordshire home. His Heron alarm was the forerunner of today’s electronic bite indicators. He played a key role in the development of carbon-fibre rods. He was the inspiration and leading light of the Carp Catchers’ Club, whose august membership included BB (Denys Watkins-Pitchford), Bernard Venables and Fred J Taylor.

His very first fishing article was published in The Fishing Gazette in September 1936, and he was paid 15 shillings for it. This encouraged him to write more and he became a profilic author, contributing to all the main magazines of his day, often under the pseudonym Water Rail.

Dick's writing was hugely influential. His 'Still Water Angling' played a key role in the foundation of specimen hunting, and his weekly column in the Angling Times, which ran for 30 years, was required reading, being superbly written but challenging, questioning and inspiring.

Other publications like 'No Need to Lie' and 'Drop Me a Line', written with Maurice Ingham, carry a high value on the book collector market. Walker wrote more than 20 books, though some were reprints of his columns, published after his death. His very first, though, was not about fishing but breeding rabbits!

Dick appeared on Roy Plomley’s 'Desert Island Discs' radio programme in 1974. He died of cancer in 1985, but his influence still pervades everywhere. His birthplace, 32 Fishponds Road, Hitchin, bears a Blue Plaque, a scheme which commemorates the home or workplace of a famous person. Dick is the only angler to have been awarded this honour.