On 7 October 1922 the legendary Miss Georgina Ballantine landed the biggest ever rod-caught British salmon from the Glendelvine beat on the River Tay. Her feat that day will never be repeated, as the chances of a salmon of this size existing today are truly miniscule.

For many years to come there will be those who turn to their children and say … I knew Miss Ballantine, who caught the record salmon... she was a truly wonderful person.

The 10 February 1923 edition of the Fishing Gazette carried Georgina’s own story of this epic battle. Presumably, the truth had been stretched, or the capture reports so distorted, that Georgina needed to put the record straight. The editor and owner, Robert Bright Marston, was only too pleased to get this exclusive scoop. The article began:

(I have much pleasure in giving this interesting account of how Miss G. W. Ballantine caught and fought her 64lb. Tay salmon. — R. B. M.]"

That salmon beats any other rod-caught authenticated salmon previously taken on rod and line. Owing to the laird being indisposed, Georgina went out with her father, James. It was the last day of summertime. Melvin the boatman left early, leaving Georgina and her father fishing on towards dusk. Two rods were out 'harling', one baited with a 'Wilkinson' fly and the other with a 2-inch dace on a Malloch spinning mount.

Georgina takes up the story, as it appeared in the Fishing Gazette:

"Immediately above the 'Bargie' stone, father remarked that we should 'see him here'. Scarcely were the words spoken when a sudden 'rug' and 'screech' of the reel brought my rod into an upright position. He was hooked!"

At first, this did not appear to be a huge fish and they both felt that by playing him into the slack water behind 'Bargie', the fish would soon tire. This giant salmon then made its bid for freedom, rushing off 500 yards downstream and taking 150 yards of line with the boat in tow.

"Heading for the north bank, we were in the act of landing about 200 yards above the bridge when he came practically to the end of the boat. Scenting danger ahead, he again ran out of reach. Leaving the boat, we followed him down, and as chance would have it he passed between the north pier and the bank when going under the bridge, otherwise we would have been in a dreadful hole."

Her father quipped, "Dinna lat the beast flee doon the watter like that, ‘ummin."

They disembarked from the small boat then clambered aboard as once again the fish made its way downstream. The strain began to tell on Georgina, even though she was a veteran salmon angler, having taken three fish earlier in the day up to 27lbs.

Darkness descends and the fish fights on

Darkness fell and Georgina and James could make out the trees on the island silhouetted against the sky.

"We had hoped by the light of the moon to find a suitable landing-place, but unfortunately a dark cloud obscured her. The fish kept running out a few paces, and then returning, but long intervals were spent without even a movement. He inclined always downstream until the middle of the island was reached, and the light in the cottage window at Sparrowmuir blinked cheerily across the river.

"Once I struck the nail on the head by remarking that if I successfully grassed this fish he must give me a new frock. 'Get ye the fish landed first and syne we'll see aboot the frock,' was the reply. (Nevertheless, I have kept him to his word and the frock has been ordered.)" 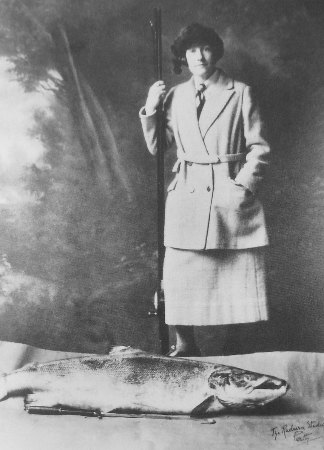 Eventually persistence paid off and the fish came close to the boat, where James felt for the junction between the main line and the cast.  When Georgina had wound the join up to the top of the rod James gaffed the fish, hauled it into the boat and promptly collapsed on top of it exhausted. The time was 8.20pm and the fish had been played for some 2 hours and 5 minutes.

They rowed back upstream to their Tayside cottage to be greeted by Georgina’s anxious mother who said, "Guid sakes, I thoct ye were baith in the watter!"  This red letter day was topped off with a 'toddy', which both Georgina and her father considered a well-earned nightcap.

The next day the local newspaper, the Perthshire Advertiser, carried the following headlines, but even then it was not front page news as it would have been today.

"Monster Salmon Caught in the Tay"

Georgina only became aware of her tremendous feat when, on visiting Perth on the Monday, a huge crowd had gathered in front of P D Malloch's fishing tackle shop. She thought someone had had an accident but was surprised to learn that the large crowd were jostling for position to see her 'monster' fish which was displayed in Malloch’s shop window. 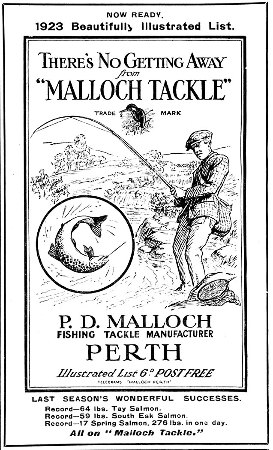 Monstrous fish put to good use

The fish itself was 58 inches long (spread your arms out and try it) and 28 ½ inches in girth. This fresh run cock fish was not wasted. Once Mallochs had completed a cast of the salmon, most of the patients and staff of the Perth Royal Infirmary found fresh salmon on the menu.

This association with hospitals was no coincidence as Georgina had been decorated for her work with the Red Cross in France and had worked at a number of hospitals up and down the country. She later attended dinners in her honour and became the most famous female angler in Scotland. In 1923 the giant tackle firm Milwards conducted a review of all the British Angling Records and, in commemoration of her epic battle, awarded Georgina a special Milwards 'Fly Brooch'.

Even in 1922 at the relatively early age of 32, Georgina had arthritis in her hands. This worsened in her later years to such an extent that she was crippled and eventually her legs were amputated. Georgina never married. The villagers rallied around to take care of her and she even had a special alarm light fitted on the top of cottage. If she was in trouble, the light attracted help from the neighbours.

She passed away in 1970 and this epitaph, spoken by Reverend Bell at her funeral, sums up the kind of person she was.

"For many years to come there will be those who turn to their children and say … I knew Miss Ballantine, who caught the record salmon... she was a truly wonderful person."

To top it all, the captor of the largest Atlantic salmon that will ever be caught in Britain could not become a member of the men-only Fly Fishers Club, even though they displayed a beautiful watercolour of the fish and the cast at various times in their history. How ironic it was when the president had to explain to reporters, anglers and dignitaries that the record salmon was landed by a woman.