My life afloat with Theakston & Merlin

A few observations on living aboard with a ship's cat

Vanaheim Merlin looking out at the towpath

I was always a cat slave by intent, my first cat Tabitha and I became inseparable companions when my age was still just single digits. What I never expected was to become a liveaboard boater in my thirties and when it happened, my old peculiar tabby cat Theakston came with me to a new watery life on a narrowboat.

I was worried how Theakston would cope but he probably adapted more quickly than I did once we’d worked out the best place to put his litter tray, his food and water. The second challenge was a cat flap as you don’t really want to be cutting holes into your steel boat if you can possibly avoid it. The solution was a false door of heavy duty marine ply with a cat flap inserted and bolted into one half of the bow doors. Easy to undo from the inside, difficult to undo from the outside it worked a treat.

Theakston spent 3 ½ years on board with us, ruler of his kingdom on boat and mooring as well as cruising with us along the Thames, the Oxford, Ashby, Coventry and Grand Union canals before he passed over the rainbow bridge aged 14 something. I was never totally sure of his age as he was a rescue cat.

Two years passed and we still missed Theakston so much that another big fluffy boy was a must. Merlin was a Norwegian Forest cat and utterly gorgeous. When he first arrived home he was so tiny he could sit comfortably on the 5cm window ledge of the bow windows. Kittens on boats are more challenging than older cats, there are plenty of small spaces for them to hide and also get stuck, usually inaccessible places like the back of the calorifier cupboard! 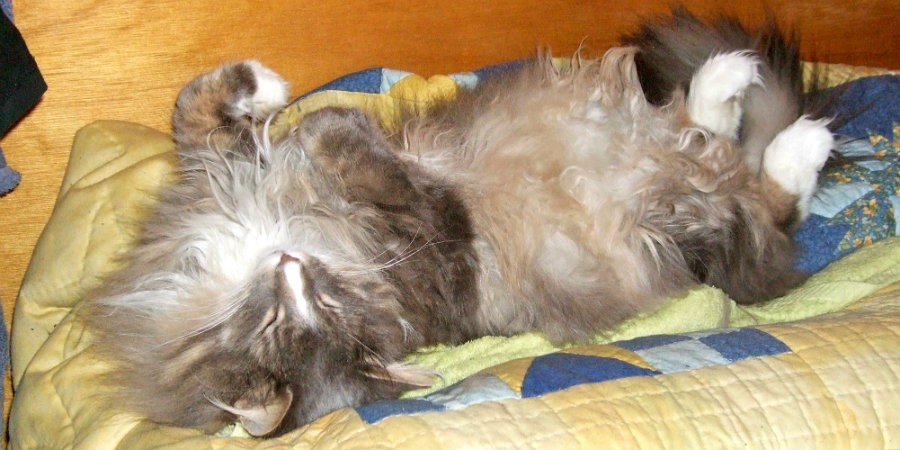 Merlin took to cruising with a much more laid back attitude than Theakston who would hide under the bed when the engine started. Merlin would sit on his favourite perch looking out of the saloon window watching the scenery change through locks, under bridges, over aqueducts.

When cruising we were always more nervous of letting Merlin out unsupervised as he wasn’t as streetwise as Theakston. We don’t have speeding cyclists, hundreds of runners, mobility scooters or large aggressive cat chasing dogs on our mooring but they are a fact of life of many towpaths and many pets have been injured or lost.

Both of my cats fell into the canal during their lives. Theakston just 3 times, all early on in his boating career and he rescued himself each time. Merlin however used up most of his 9 lives falling in 8 ½ times and requiring a human in water rescue one bitterly cold winter as the ice was melting. Definitely not recommended for either pets or people and fortunately neither Merlin nor I repeated our stupidity.

Merlin passed away last year after a short illness, far too young aged 10 and a bit. I still haven’t got used to having a whole half of our narrowboat bed to myself, no furry purring pillow or leg deadening lump to greet me in the morning. There is definitely a vacancy for ship’s cat that will be filled if I can get the captain’s say so.

From boating buddies, holidays to birthdays and licensing - read more blogs from the boating team