Susan and Erin, visiting the canal to feed the ducks

"If we didn't have the towpath we'd have to walk along the main road into the city."

It's the first time I've ever brought her to the canal. I've known the canal for a long time, but it’s this little lady’s first time. We've come to feed the ducks.

Erin's my great-niece. She was two on Monday. She's been going to nursery a couple of days a week ever since her mummy went back to work, and we have her one afternoon a week to help out with nursery costs.

She's normally asleep in the afternoons when we have her, but she's getting a little bit older now so she's more active. That's why I decided to introduce her to the canal today. We've had a lovely time feeding all the ducks and listening to the “Quack quacks,” The trees have been dropping their leaves and Erin likes the sounds of kicking through them as well. 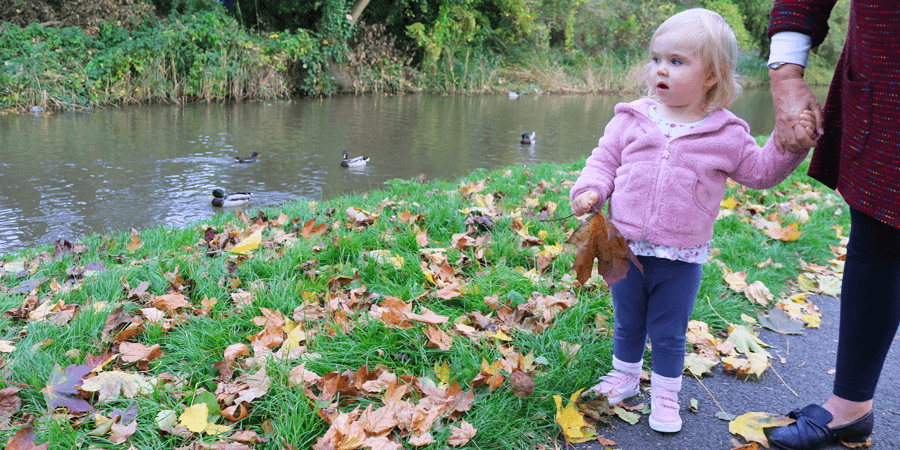 I know there's a playground right by the waterside just here but I haven't taken her to play there yet because I think she's too young at the moment, but that will be the next stage for her when she's a bit bigger.

We live just up the road so that's why I've known the Worcester & Birmingham Canal for quite a long time. I think over the years it has become much cleaner and nicer now than it used to be. I've seen groups doing a general clean-up and regularly picking up litter which helps keep the place tidier.

It's half-term, so luckily for Erin the water is quite busy this week and we've just seen a few boats go past in a row.

I think I'd miss the canal in lots of ways if it wasn't here. I use the towpath to walk to work because it's nicer and quicker. It's a good way to walk to work, I think it's beautiful by the water and lovely route. If we didn't have the towpath we'd have to walk along the main road into the city.

We’re on our way back home now because Mummy will be back from work to pick Erin up.