'Wonder of the waterways' gets a new year makeover

A major programme of work is underway on the four highest locks at the Caen Hill Flight on the Kennet & Avon Canal.

A team of highly skilled, experienced craftsmen and women from the the Trust, will be re-lining the massive lock gates, and repairing brick work in lock chambers that date back to the early 1800s.

A wonder of the waterways

The Caen Hill Flight, at Devizes in Wiltshire, is described as the one of the wonders of the waterways. Its sixteen locks form a giant watery staircase allowing boats to travel up, and down, the steep hillside. Being amongst the busiest locks on the canal network, they require constant attention and this year we are focussing on the pinnacle of the flight (locks 37 to 40).

It’s a massive challenge that involves draining the adjacent side reservoir ponds (used to store water to operate the locks) down to around 0.5m deep. This allows the engineering team to descend the 5.5m (18 feet) into the locks to repair the brick work. In keeping with the locks’ heritage, the team will use traditional lime mortar, as was used when the locks were built in 1810.

Caen Hill’s hard-working lock gates also bear the evidence of the thousands of boats that travel through the flight each year (it hosts an estimated 1,500 to 2,000 boat movements annually). So, the lock gates, scarred by the bumps and scrapes of thousands of fenders, will be relined using traditional green oak.

A massive feat of engineering

The works at Caen Hill are part of the our national programme of repairs being carried out across England and Wales under coronavirus restrictions this winter. The £45.1 million programme of repairs will include lock gate replacements, dredging to ensure the water is deep enough for boats, and a host of tasks to keep the 200-year old network open and help ensure its resilience to climate change. 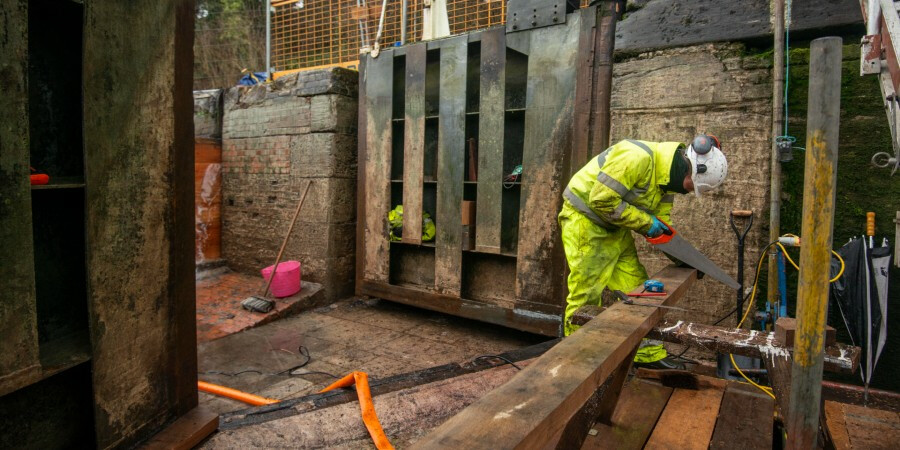 Mark Evans, our director for Wales & South West, explains: “We are proud custodians of Caen Hill Flight. As a Scheduled Ancient Monument, it enjoys the same level of heritage protection as Stonehenge – so it’s a big responsibility. This year the Trust is spending £70k on the repair work at Caen Hill to allow the thousands of visitors, on boat and on foot, to continue to enjoy this very special place.

“The flight is iconic for so many reasons. It’s a massive feat of engineering from the heyday of the canals and one of the country’s longest continuous runs of lock flights.

"It’s also the ultimate challenge for many boaters – demanding four hours to travel up, or down. Such is the challenge that we have a team of lock keepers, many of them volunteers, to assist. And those volunteers also help to care for the canal and towpath.

“This winter work is crucial to keep the flight in peak condition. It continues to be breath taking - both to those on the towpath enjoying the view during part of their daily exercise today and (literally breath-taking) to boaters negotiating through the locks in future months.

“The safety of our colleagues also remains a priority, with this project being safely carried out within the Government’s coronavirus guidance.”

The towpath at Caen Hill remains open and the flight is planned to reopen to boats on 19 March 2021.