What lurks beneath the waterline?

A national survey to record all the weird and wonderful items people throw into their local waterway has uncovered some bizarre objects.

From a Mercedes A class car to open safes and a bag of bullets – discarded rubbish is a major nuisance to the Canal & River Trust.

Over the past five years we've hauled out an unexploded World War 2 hand grenade, a 16ft dead python, antique poison bottles, a Volkswagen Camper Van and a pizza delivery bike complete with a soggy pizza.

Other items include a headless Paddington Bear, a bus stop sign, bubble machine, hearing aid, a darts medal and an adult toy. 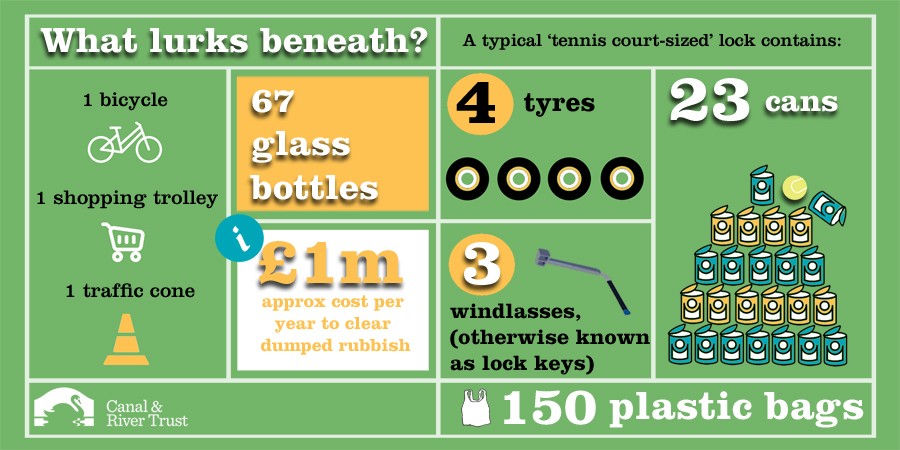 It costs us about £1 million each year to clear the dumped rubbish, funds that could be spent on improving wildlife habitats and ensuring the waterways are navigable for boaters.

However, this is just the tip of the iceberg in terms of volume of rubbish. We often can’t recover every item which means it lies on the bottom of the canal bed out of sight and mind to many passers-by, causing problems to boaters and wildlife.

This winter, as part of our £45 million restoration and repairs programme, we conducted a four month survey to record the rubbish being removed from the canals and to reveal what lurks beneath the waterline.

The survey results found that a typical tennis-court-sized lock contains the following:

Every year thousands of plastic bags and fizzy drink cans are thrown into the waterways but just one of those cans can take up to 200 years to biodegrade and a supermarket plastic bag up to 20 years.

The rubbish is not only an eyesore but has a real environmental effect on the waterways. Tyres and other rubbish contain pollutants which leak into the water and poison fish and other wildlife. Often rubbish acts as a choking hazard and wildlife can become trapped amongst the litter.

Money could be better spent

Peter Birch, national environment manager for the Canal & River Trust, said: “I’m constantly surprised at what people throw into the canal and the quantity of litter that we retrieve. Dealing with the problem is a big task and the money could be better spent enhancing the canals for people and wildlife to enjoy for years to come.”

As we come to the end of our winter restoration and repair work, we are calling for people to think twice about polluting their local canal or river with old plastic bags and litter.

Help us tidy up