Thanks to funds generated by National Lottery players, the Canal & River Trust charity has secured initial funding from the Heritage Lottery Fund (HLF) to develop plans to restore and reopen the Grade II listed Stainton Aqueduct on the Lancaster Canal near Sedgwick, in Cumbria.

HLF’s initial development funding award of £41,000 will enable us to work alongside the Lancaster Canal Regeneration Partnership (LCRP) on a second stage application to be submitted in November. If successful, the bid will unlock £1.5m from HLF towards a total project value of £2.2m.

The project will fund repairs to Stainton Aqueduct, which was badly damaged during storms Desmond and Eva in December 2015. It will also help to develop other key sites along the Lancaster Canal, such as Hincaster Tunnel and Sedgewick Aqueduct, and promote new educational and volunteering opportunities along the waterway as part of the Partnership’s Lancaster Canal Towpath Trail project. 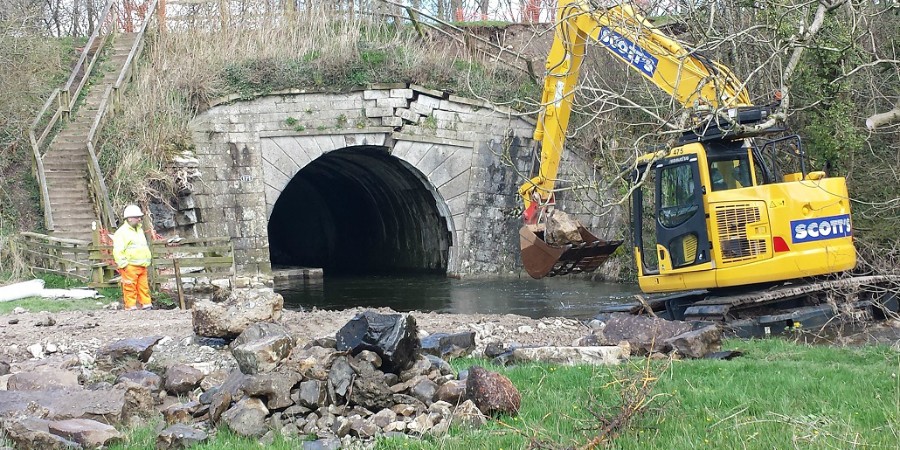 Nick Smith, enterprise manager here at the Canal & River Trust said: "This initial grant is great news. We can now work hard on a second stage application that could enable to restore and reopen the aqueduct. In addition, we are working with Lancaster Canal Regeneration Partnership to help realise our aspirations for wider heritage regeneration activity on Lancaster Canal ahead of its bicentenary in 2019."

Helen Moriarty, project officer for Lancaster Canal Regeneration Partnership said: "We look forward to continuing to work with the Canal & River Trust as we breathe new life into this waterway through the Lancaster Canal Towpath Trail project. The canal has great untapped potential as a regional visitor and tourism destination and a successful stage two HLF bid would make a significant difference."

The Grade ll listed Stainton Aqueduct was built in 1819 and carries the Lancaster Canal over Stainton Beck. Prior to the damage caused during extreme rainfall in the December 2015 storms, the aqueduct was in good condition. Emergency stabilisation works costing £250,000 were completed onsite by the Trust in early 2016. However, these were not sufficient to open up the public right of way through the aqueduct tunnel or to enable navigation over the aqueduct (principally used by a trip boat operated by the Lancaster Canal Trust).