New underwater robot is a game changer for reservoir maintenance

Known as Valiant, the tracked remote-operated vehicle has allowed our engineers and their contractors Keir to carry out importance maintenance tasks without the need to drain the reservoir, retaining existing water levels in the popular lake for boating and fishing, and saving hundreds of thousands of pounds in fish rescue fees.

We've embarked on a major repair project to upgrade the Merseyside reservoir in the summer of 2020 and will complete the work this July.

Costing more than £2 million, the project was delivered in two phases. The first upgrade was carried out at the outfall tunnel by the railway viaduct and involved the removal of an asbestos concrete pipe and installation of a new gauging weir, security grill, safety railings, ladders and steps.   Further substantial work involved cleaning out the stilling basin, undertaking repairs and resealing construction joints on the spillway, plus other safety and access enhancements.

The second phase involved the dam embankment itself. Extensive repairs were carried out to the old spillway and its bridge strengthened to carry modern traffic loads. The main work was to replace the valves located at the base of the valve shaft. The two original valves dating back to the 1860s were in poor condition and were replaced with four new ones, complete with supporting mechanisms. Work also included a range of improvements and repairs to increase the resilience of the crest road and repairs to the valve hut building, including a new roof. 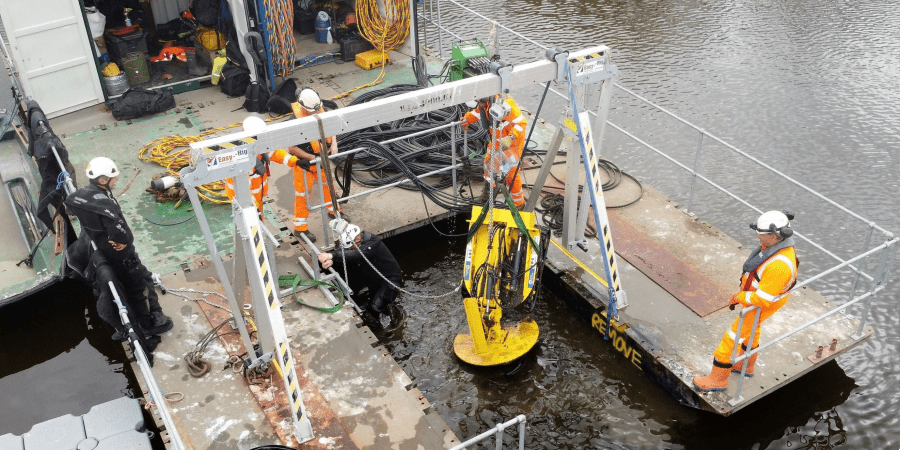 Visitors will now be able to admire the ingenuity of Victorian canal-builders close up, as one of the original valves, which measures more than two metres high, has been preserved as a monument to the enterprising engineers who built the reservoir. A few months ago, the Trust sent it away to a specialist firm to be shot-blasted and painted, and it has now been returned to a special new plinth by the valve hut for everyone to admire.

Originally a mill pond powering Carr’s Corn Mill, the lake was hugely expanded in the 1750s to provide water for the Sankey Canal about a mile away. This is no longer navigable but the reservoir has now become a popular venue for angling and water sports, as well as a great habitat for wildlife.

Tim Brownrigg, our project designer, said: “The Valiant was developed in collaboration with diving contractor Edwards Diving Services and is set to revolutionise how we manage underwater reservoir maintenance, particularly difficult jobs like replacing old, worn-out valves in locations where it is too dangerous to send divers.

“The Trust cares for 72 reservoirs across its 2,000 mile canal network so the potential reduction in disruption for local residents, water sport enthusiasts and wildlife is immense and of course, cost savings are likely to be significant.

Our project manager Curtis Udogu said “It’s been fantastic to keep Carr Mill in water for the entire complex upgrade project over the last year. Our top priority is always to keep local residents and businesses safe, so from time to time we do need to upgrade equipment, and repair and replace the infrastructure. We know people feel healthier and happier when they’re by water, so this ability to keep reservoirs in water during major maintenance projects will pay dividends in the future for everyone.”