Since our last flooding update there has been a lot of hard work, both on the ground and behind the scenes, to repair and reopen sections of flood-hit waterway in and around the Calder Valley.

We’ve had an amazing response from those locally, which has seen people aged from 8 to 80 giving over 3,000 hours to repair and reopen stretches of towpath that had been badly damaged by the floodwaters. We’ve also seen fantastic support for our fundraising appeal and we’ll give more details on how this has helped communities affected by flooding later in the month. 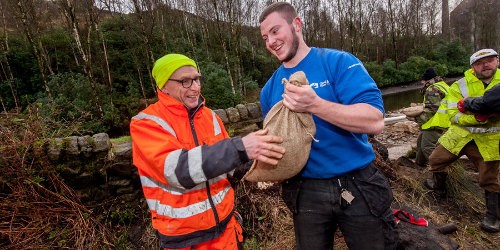 We’re really grateful for the help of each and every individual that has given their time or made a donation - it shows just how important our waterways are to people.

Alongside the efforts to repair towpaths for those on foot, we’ve also been working hard to fully understand what needs to be done to reopen the affected waterways to boats. We now have a much clearer idea of the timescales involved and are able to share some details of our plan.

The good news is that, as part of the first phase of our programme, we’re planning to reopen over 12 miles of waterways to boats in time for Easter. This will be in two sections; the Rochdale Canal between Sowerby Bridge and Hebden Bridge and the Calder & Hebble Navigation between Cooper Bridge and Figure of Three Locks.

Getting to this position has involved significant dredging works and repairs to lock gates, wash walls and weirs.

The next stage of the programme is focussed around early summer and by the end of May we hope to be able to reopen a further section of the Rochdale Canal heading west from Hebden Bridge towards Lock 15. Shortly afterwards we’re aiming to open up the Calder & Hebble Navigation between Salterhebble and Cooper Bridge.

Elland Bridge and Crowther Bridge need to be completely rebuilt as both have been badly damaged. In each case our engineers are planning the rebuild so that the canal can be reopened to boats once the new bridge foundations and a concrete arch are in place – expected to be at the end of June.

This will mean that boaters can then use the canal while the remaining works to rebuild the bridge take place, reinstating an important link from Hebden Bridge to Wakefield and beyond and to the Huddersfield Broad Canal. 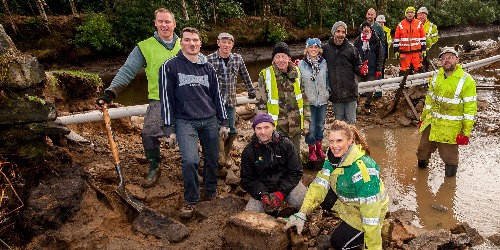 Alongside all of these works we’re also progressing the projects to repair the breach and landslip that occurred on the Rochdale Canal. These are two major, and complex, engineering jobs and so timescales are slightly less clear but we’re working hard to get these sections open as soon as possible this year. There are some rumours locally that the canal will be closed for the rest of the year and most of next – this is certainly not the case, we’re doing everything that we can to open the canal as soon as possible this year and we will share more information when we have more details.

Repairing the damage caused by some of the worst flooding ever seen on our waterways has placed real pressure on budgets and the availability of our staff and contractors. With flood-related works estimated to cost just over £10m (with £5.5m being provided by Government in relation to the works at Elland Bridge) we will have to delay or scale-back some other projects that were in our plan for the year ahead. We’ll be able to provide more details in the coming weeks.

Whilst there’s still a huge amount that needs to be done we’d like to thank boaters and local businesses for their understanding and patience as we’ve worked through exactly what needs doing.

It may take some time for sections of waterway to get back to looking their absolute best, but we’re pleased that sections of canal and towpath are being reopened and that life can begin returning to normal on our flood-hit waterways.