Engineers have started the careful job of taking down Elland Bridge on the Calder & Hebble Navigation, which is being rebuilt after the Boxing Day floods caused catastrophic damage

The work can now get underway as utility companies have recently completed work to divert important services such as electricity cables, gas pipes and telecoms wires, which were carried on the bridge. These services now cross the waterway via a specially constructed temporary bridge. 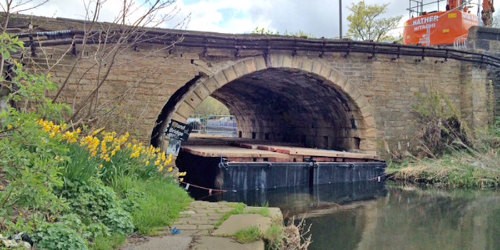 Built in around 1811, Elland Bridge is Grade II listed and contractors are taking a sensitive, methodical approach to the works. Important features are being carefully removed and catalogued so that they can be re-used in the replacement bridge.

These include the huge stone copings on the top of the bridge, the dressed stones over the arches (known as voussoirs) and the remains of cast iron rope rollers which allowed boat tow ropes to run smoothly through the bridge back in the days when freight barges were pulled by horse.

The new bridge has been designed to look similar to the existing one but with a strengthened concrete arch inside it. The result will be a stronger bridge, built to modern standards whilst still reflecting the history of the canal.

Judy Jones, heritage advisor for the Canal & River Trust, said: “It’s sad to see the bridge being taken down but this is an important step in reinstating the link across the canal for local people.

“Research has shown that the bridge was built just over 200 years ago as an extension to the river bridge and so has great historical interest. With this in mind it’s not just a case of going in with a wrecking ball, we’re taking a careful approach to preserve as many of the important features as possible so that they can be put in place on the new bridge.

“As a result the new bridge should look familiar to local people, retaining the scale of the existing bridge and boasting some of the historical features.”

Open before the end of the year

Once the bridge has been taken down then works to build new foundations will begin. When these are completed, around the end of June, the canal beneath the bridge will be reopened to boaters while the remaining works take place.

The Government has pledged up to £5m for the replacement of the bridge. As part of the package we are also providing our expertise to replace the nearby Crowther Bridge, which is owned by Calderdale Council and was also severely damaged by the floodwaters. Managing the two projects in tandem will mean that the most can be made of cost-efficiencies in design and construction.

It’s anticipated that both bridges will be built and available for use before the end of the year. A temporary footbridge next to Elland Bridge which was constructed in January will remain in place throughout the works.

Find out more about our work

We have around 1,600 members of staff and hundreds of volunteers dedicated to making our waterways the best places they can be