Don't drink and drown this Christmas

The Manchester Water Safety Partnership is working with Nick Pope, whose son Charlie tragically drowned in March 2018, to support the Royal Life Saving Society UK’s Don’t Drink and Drown campaign, this year running from 2-8 December, which urges people not to walk home near water after they have been drinking.

As part of a safety campaign this video has been produced on behalf of the Manchester Water Safety Partnership, with Nick Pope and Canal & River Trust urging people to stick together on nights out and take a safe route home.

Earlier this year barriers were installed along the stretch of canal where Charlie drowned, with the fencing now directing people to cross the canal using an existing footbridge. The Partnership has also installed rescue equipment at Lock 89 (Tib Lock) and Lock 87 (Canal Street) and lighting has been upgraded along the canals in the city centre with further safety improvements planned in the future.

The Partnership will be out during the Royal Life Saving Society UK’s Don’t Drink and Drown campaign week talking to festive goers about the dangers of walking near water after drinking, and handing out leaflets and wristbands.  Banners will also be put up across the waterways to raise awareness.

Nick Pope, said: "I fully support the RLSS 'Don't Drink and Drown' campaign, which this year focuses on the key message of looking after each other on a night out, particularly when near water. Alcohol near water is a dangerous combination and I give great credit to the Manchester Water Safety Partnership for their efforts in improving safety around the inner-city waterways."

Look out for your friends 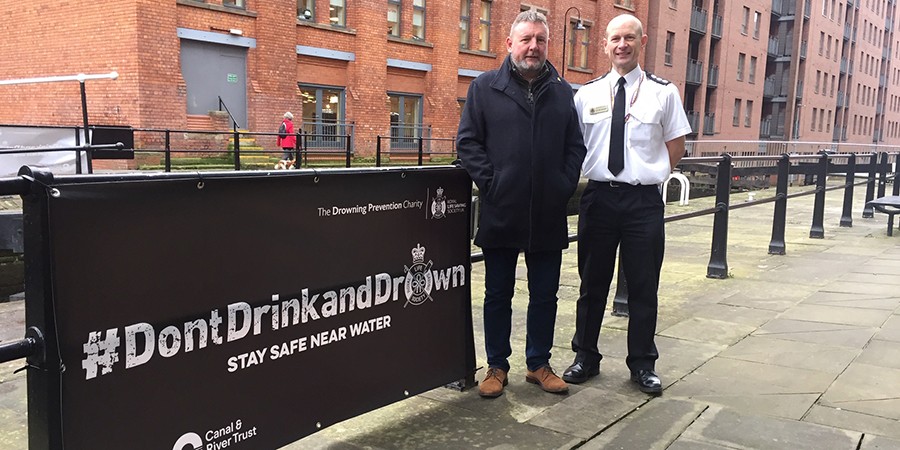 David Wilson, station manager at GMFRS and chair of the Manchester Water Safety Partnership, said: "During the past three years we have rescued approximately 45 people from rivers and canals in and around the Manchester City Centre area.

"Manchester is a fantastic and vibrant city and we want everyone to enjoy their time here. On your way home after a festive night out, look out for your friends at the end of the night and find another route home away from water."

There were 1,481 accidental deaths in the UK between 2014-2018 and more than 30% of the victims had alcohol and/or drugs in their bloodstream*. Many of them drowned because they walked home alone and fell in the water.

Laurence Hickin, RLSS UK Community Drowning Prevention Coordinator for the Manchester area, said: "It’s a sad truth that the number of drownings increase in the winter period, more often than not because of intoxication.

"Families, friends and whole communities are left devastated every year because someone walks home alone whilst under the influence and falls into the water. We’re urging people to stay together on a night out. Make sure their friends get home safe and don’t let them walk anywhere, especially near water, alone."

The Don’t Drink and Drown campaign, this year running from 2 to 8 December, was launched in 2014 following a string of tragic drownings of young people. RLSS UK was keen to prevent more tragedies, by targeting at risk groups in hot spot areas, at particular points in the year where alcohol related drowning incidences increase - September (at the start of the new university term) and December (during the festive period).

As part of the campaign, organisations up and down the country promote water safety messaging and run awareness activities urging revellers to take care near water whilst under the influence of alcohol and/or.

More about this campaign

Find out more about the Don't drink and drown campaign