In his latest article, John Ellis recollects his past involvement with his village angling club.

The parish of Grindley Brook is famous for, well, not very much really. As far as I know, there were no famous historic battles held in my home village. Grindley Brook has never yet produced a prime minister, an Olympic champion or a Noble prize winner. If you had three legs, there is a location in the parish where you could be standing in Shropshire, Cheshire and Flintshire (Clywd) concurrently. Grindley Brook has over the years produced a greater than average number of anglers, for when I was secretary of the village club, few if any resident youngsters failed to be persuaded to at least give fishing a go and a fair percentage went on to acquire the fishing habit.

It would have been in 1978 when a group of us, encouraged amongst others by the indomitable Thelma Platt, devoted mother of occasional errant son John Jnr, decided to hold a series of summer evening fishing matches on the Llangollen Canal. For I almost forgot, Grindley Brook is indeed famous for the Llangollen Canal, its staircase locks and its Grade 2 Listed Telford lock cottage. In that first season competitors would have included Ian & Stuart Reynolds, Malcolm Crump, Dave Wright, Johnny Platt & his cousin Steven, Paula & Ian Robertson and Stewart Skowronek as well as yours truly. The fishing was controlled back then by an amalgamation of clubs under the banner of the Shropshire Union Canal Angling Association. Dad wrote to Stan Jackson, the then secretary of Warrington Angling Association, to gain permission for us to fish. Weights were low, with gudgeon and ruffe the main catch. Malcolm Crump once landed a 2 lb plus eel; the rest of us were fishing for second spot that night.

After that first year interest grew and although and I was spending much of my spare time as a coach. If anyone wanted to learn to fish, I would show them to the best of my limited ability. Over the next four or five years, numbers attending these summer holiday matches increased. At various times, competitors included Nick Grills, Ian Cliff, Tracey & Jason Shone, Gary & Ian Taylor, Peter Barton, Stephen Oliver, Nick Roberts, James North, Mandy Gilbert, Phil & Roger Robinson, Charlie Habberley, Paul & Nigel Roberts, Andrew Hughes, Martin Poole, Julian Goodwin, Julian Dimelow (who later tragically passed away after being stung by a bee), Evan Peter Clarke, Justin Lloyd, Michael Simmons, Martin Price, Tim Dutton, Tim Uttley, Evan Barker and James Dicken. I must not forget my brother Andrew either. His favourite method back then was to ledger with a five foot quivertip rod and he caught gudgeon galore using that technique.

Whilst at school I worked at weekends and in the holidays at Grindley Brook Garage, owned then as now by local entrepreneur, Dave Roberts. Dave was a great supporter of the fishing club. We would hold the prize presentations on Dave’s lawn or if it was raining, which it often does in Shropshire, we swapped the lawn for the luxury of the garage workshop. There was no expense spared back then! It took me nearly a year to persuade Dave’s eldest son Paul to enter his first match though. On his second outing he drew the famous slab peg just beyond the blue railway bridge. With minutes remaining and only four gudgeon in his net, Paul was getting despondent. Then his float dipped and upon striking, a huge perch getting on for a pound in weight came hastily to the surface. Panicking, Paul tossed the rod to the ground and sprinted for the safely of the bridge. His Dad landed the fish which I think was good enough for second spot. On another occasion young Evan Barker struck a trifle too hard and a gobsmacked 12 oz perch ended up in the towpath hedge. We held occasional matches against other teams, famously defeating the might of the men of Wyatt Brothers (Whitchurch), but being brought quickly down to earth when a team from Ordsall School, Salford beat us despite them never having seen our canal before.

One autumn, not long after passing my driving test, I persuaded the ever generous Dave to let me borrow a van for the purposes of transporting numerous keen junior members to compete in the Whitchurch Angling Association autumn series of six canal matches. Regulations were not as stringent back then (fingers crossed there are no traffic policemen reading this) for we once squeezed no less than 11 anglers into that three seater van. In the rear of the van were eight youngsters plus all our equipment, packed together more tightly than sardines in a tin. They hung on for dear life as we negotiated those twisty border B roads on the road from Malpas on route to the Llangollen canal at Fenns Bank or Whixall.

One of the big events in the junior angling calendar back in the 1970s and 1980s was the North Shropshire open junior championship. Usually it was held on the Wheatsheaf pool which had 80 pegs and tickets were always in short supply. In 1981 the dedicated Whitchurch A A secretary, Bill Young, delegated me to organise the event. Several young anglers from the Grindley Brook club were in the starting line-up that day. It was a baking hot August afternoon and the match ran from 2.00pm until 4.00pm. It fished hard and young Paul Roberts snared a 12 oz tench from peg 40 and that was good enough in third spot. As far as I can recall the winner with a two pound tench was Brett Cooper, the youngest brother in the Cooper angling dynasty. Barry and Roy are still fishing to this day. In 1984 my younger brother Andrew took the title as did James Prince later in the 1980s. 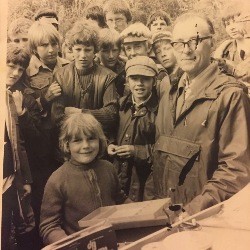 For me, it was the performance of the young Tracey Shone, aided and abetted by her Mum and granny Cath, that will remain always in my memory. Young Tracey recalls the omens were good when she saw two magpies on the way to the match. Having drawn one of the least productive pegs on the whole lake, Tracey had caught a couple of roach early doors. Fishing inches from the bank and never daring to take her eyes off the float, the determined Tracey proceeded to hook a smallish tench, maybe 6 oz of so, which then became entangled in overhead branches. Somehow we managed to get that fish banked and before the all-out tenacious Tracey landed another tench and a few bits to record just over a pound and enough for second spot. A lot of the boys seemed less than impressed that the only girl in the field had eclipsed them all bar one.

My spell at Anglian Water put paid to my involvement with the club until the late 1980s. By then the club has acquired an agreement for the fishing rights between Dansons Farm Bridge and Poveys Lock. With the help of several others, I led a renewed recruitment drive and associated coaching programme. On some occasions weekly attendance at the Friday evening matches was approaching 40, but that did include eight or ten in the newly formed adult section. We brought through a host of up and coming youngsters: Andrew Vaughan, Chris Teather, Nick Webb, Gareth Hards, Jamie Mountford, Jamie, Danny & Joanne Prince, Robert Schofield, Rohan Price, Mark, Simon & Hannah Clutton, Darren Cormes, Darren Lloyd, Steve Evans, Gavin & Darren Hollins, not forgetting the Whixall triumvirate of Chris Harvey, Guy Blackshaw & Simon Mottram. Apologies to those of you who were also part of the Grindley Brook years and have slipped my mind.

We teamed up with Wyche Anglers to compete in the 1990 junior national in which young Simon Mottram made his memorable debut and the team finished tenth. In 1993 the Wyche team, again with a strong Grindley Brook contingent, finished a brilliant second. They were pipped to the post by the strong and well coached Izaac Walton Stafford juniors on their local Staffs & Worcester Canal. The club also entered the intermediate national on a couple of occasions and ventured to the north bank of the Nene with genuine hopes of success. Alas, the waggler tactics that worked brilliantly in practice, failed to produce on the big day, such are the joys of match fishing.

When the close season on canals was lifted in the early 1990s the club found itself in an unusual situation. Half the clubs’ water was in the Welsh region of the NRA which retained the close season. However, the canal in Cheshire was in the north west region. My brother ran a series of close season matches to raise funds for the club. The biggest match the club ever held was a Silstar Pole Championship qualifier which attracted 149 anglers including the likes of Dave Hemmings, Alan McAtee, Frank Holding, Barry Bush, Dave Berrow and Pete Hargreaves plus a host of local Mohmar stars. Those top anglers caught fish which us mere mortals never thought existed; huge canal roach going on a pound and proper bream. Will the Llangollen Canal ever see a bigger match than that again?

All good things come to an end

By the mid-1990s, with marriage on the horizon and the joys of monthly mortgage payments to look forward to for a quarter of a century (the word mortgage in Latin translates as ‘death grip’ – an accurate description of a word if ever there was one), my ability to afford to travel north to Shropshire on a frequent basis was curtailed. Therefore, my time with the Grindley Brook Angling Club came to an end. I would not have missed it for the world.