Sink or swim? The challenges of buoyancy

At a recent Go Fish/National Fishing Month event, one particularly keen eyed young lad spent a good ten minutes admiring the fish display and quickly learnt the names of the eight species we had on display that day.

During the lad's stay the 4oz pike, which was making its official public debut, decided to regurgitate its last meal. As if by magic a partly digested small roach appeared on the bed of the fish tank. The young fellow then asked me why the roach had sunk and not floated like he thought it should have done. The incident got me thinking about the subject of fish buoyancy.

Do dead fish float or sink?

When kids ask you what at first appears an easy question, you know you are in trouble because inevitably the answer is subtly complex. Thus it is with dead fish. When we get fish deaths, say following a pollution, some of the carcasses will immediately sink, whilst others will float. After a few days some of these fish that originally sank might rise up again. This is caused by the build-up of gases such as carbon dioxide and methane which accumulate in the abdomen of the fish, giving rise to the ‘belly up’ expression. But what about live healthy fish, why don’t they either just float or sink?

A fish that is less dense than water will surely float to the surface. A fish denser than water will equally certainly sink to the bed of the fishery. Most of the tissues that make up the body of the fish, such as muscle and bone, are denser than water. So how do fish manage to reach and maintain a state of neutral buoyancy? Evolution, or God through the mechanism of evolution, has come up with two basic strategies to obtain neutral buoyancy: swim bladders and the use of lipids.

Swim bladders, sometimes also known as gas bladders, are organs that are filled with gas, most of which is oxygen with relatively less nitrogen compared to the percentage found in air. Gas, of course, has a very low density as there are big gaps between the molecules. Typically in coarse fish such as roach, carp and bream, the swim bladder occupies around 7% of the volume of the body of the fish.

If a fish swam to a depth of 10 metres below the surface, the pressure would double and the volume of gas in its swim bladder would decrease by around half. Therefore to maintain neutral buoyancy, the fish needs to add more gas to the bladder. It does this by complex physiological mechanisms outside the scope of this blog.

When a fish with a swim bladder is hooked in very deep water and brought to the surface quickly, the water pressure decreases and the volume of gas (and therefore the size of the swim bladder itself) increases. It effectively blows up a bit like a balloon. The external symptoms are that the abdomen becomes enlarged and the fish’s eyes will start to bulge. This can result in death, although this is not an issue if the catch is destined for the table. If the fish is played slowly there may well be sufficient time for it to be able to naturally adjust the amount of gas that needs to be removed from the swim bladder. Most anglers have fish conservation at the heart of their thinking and they have even developed methods for returning fish safely when fishing in really deep waters.

In the UK, it seems that pike are the most likely fish to suffer from ‘gassing up’ and the Pike Anglers Club have produced a useful guidance for anglers on what measures to take to ensure fish safety.

Diseases of the swim bladder

As you can imagine, a disease or parasite that damages the swim bladder can be a life changer for that individual and can even threaten the survival of a whole species. One non-native parasite that has now found its way to Europe from South East Asia is the eel swim bladder nematode, Anguillicola Crassus, which is found naturally in the Japanese eel. Not only does this horrible parasite cause significant issues with buoyancy regulation, it also weakens the fish, making it much more susceptible to other infections that its immune system would normally deal with. Given its 3,000 plus mile journey back to the Sargasso Sea for spawning and the need to change depths, it's almost certain that this parasite is putting the survival of the European eel at significant risk.

Fat as a buoyancy aid

Fat, as well as being an efficient energy store, is lighter than water (there is twice as much energy in a gram of fat compared to a gram of carbohydrate or protein). Many fish, especially cartilaginous fish such as the shark family, maintain neutral buoyancy by storing sufficient fat in their livers to counteract the effect of the denser tissues. Sharks store a substance called squalene in their livers, which has a specific gravity of 0.86 (the specific gravity of sea water is 1.026) and some other fish store wax esters. Some fish have huge livers, making up around 25% of their overall weight. 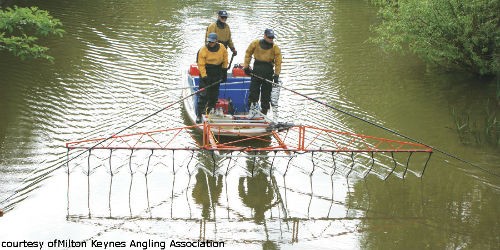 Electrofishing is a tool used by fisheries managers for various purposes. It is not, as some would believe, a magical fish capturing device and all the fish in the immediate vicinity do not mysteriously float up towards the operatives as if willed on by some supernatural force. Electrofishing works best in shallow water and on larger fish. The longer the fish’s body, the greater the potential difference or voltage between the head and tail of the fish. The position fish occupy in the water column constantly varies, depending on all sorts of factors. Often, in cold water conditions, the fish are effectively sitting on or close to the bed. When stunned, the fish simply sink to the bottom, more often than not invisible to the operative. Later in the day the same fish might be swimming more actively in mid water and will float to the surface if stunned.