No fishing career could ever be totally complete without at least one memorable maggot moment. In this light hearted article I recall three such incidents which will hopefully make you smile, and perhaps encourage you to reveal to the wider world the circumstances of your own personal maggot disaster.

Keeping up with the Joneses

My match fishing career started in earnest in the 1970/71 season at a venue called the Bulls Head pool, Fens Bank. On route Dad would collect father and son combination, Harry & Wilf Jones. In those days, fitting four lots of fishing kit in one car was a piece of cake. After the match, win or lose, we would drop Harry and Wilf off and would always be invited in for tea and apple pie by Harry’s long suffering wife, Alice. That dark, peaty Bulls Head pool, which took its water from the Whixall Mosses, was a hard fishery even when it fished well.

By the time of the autumn frosts, ounces would often win the day. One of Dad’s tricks was to keep his maggots in a small tobacco tin in his pocket. He reckoned it kept them warmer and they would wriggle a bit more on the hook, hopefully gaining an extra bite or two.

There’s a hole in dad’s pocket 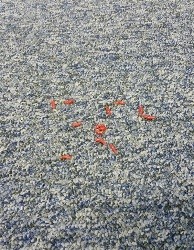 One particular morning the lid of said tobacco had come ajar and unfortunately, maggots being maggots, they had ventured en masse into his pocket. Crisis would probably have been averted except for the unfortunate fact there was a tiny hole in said pocket. As we stood drinking tea in Mrs Jones’ living room, a steady trickle of perhaps a dozen or so rhodamine dyed gentles wriggled their way into her brand new living room carpet. Amused she certainly was not, but Alice must have eventually forgiven my embarrassed father, for we kept on visiting for many years to come. Indeed, around that time the ever generous Wilf bought me a 10 foot long fishing rod for my eighth birthday. It was one of the best birthday presents I ever received. 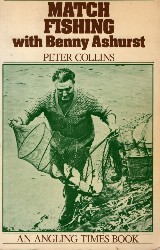 Much to Mum’s chagrin, I must confess that I studied Benny Ashurst’s book on match fishing with greater intensity than some of the classics of English literature that were on the curriculum at school. When I was first told we would be studying Shakespeare, I had actually believed it would be the fishing tackle catalogue and not the works of some old bloke from Stratford. Oh, the naivety of an eleven year old. It was in Benny’s book that I first read about the art of breeding gozzers. Obtaining pigs hearts wasn’t a problem. Tom Wilkinson, the local friendly butcher, would supply one for a few pennies. Indeed if none of his staff were around, Tom didn’t charge me at all. After all, Tom understood I was the son of a poor farmer and that I needed to save every penny I could get my hands on for some item of fishing tackle or other. He also promised not to tell my Mum of my secret gozzer breeding programme. To this day I remain convinced that I got more bites and henceforth landed a few more fish using those wonderfully soft, aromatic maggots. I never did get around to trying the annatto dyed versions, as try as I might I could not find a local cheese farmer who might loan me a supply.

One day Mum decided to venture into the extreme far corner of our garden in Grindley Brook where my rusty metal gozzer bucket was, so I thought, safely hidden. Maybe it was the pungent odours that attracted her or maybe it was just parental curiosity. Suffice to say, upon discovery, she wasn’t exactly full of positively reinforcing vocabulary about my achievements. Sorry Mum. Mind you, it didn’t exactly stop me carrying on, because winning junior fishing matches was, as Mr Shankley might have quipped, ’far more important than life or death’. I once cycled a 26 mile round trip to Billy Jones’ tackle shop in Nantwich, just to buy a pint of squatts that I felt might give me the edge. Dedication or madness? Make up your own mind.

My third maggot incident took place not long after joining British Waterways. Various multinational oil companies had paid for a series of fish passes to be installed on the Thames weirs with a view to the re-establishment of a viable salmon run. Gulf Oil were hosting a major function where the great and the good in the business and diplomatic world were invited to take a luxurious Thames cruise followed by a gathering at Mapledurham House.

The original invitation actually went to our Chief Executive but one of the secretaries, seeing the invitation was something to with fish, put my name down as the delegated attendee in error. There is no way that Karen Jell would make such a mistake these days. Thus it was my secretary, Christine Watson, and I who ended up being invited to what remains the most lavish corporate function that I have ever attended.

It was said, and I think it’s possibly true, that more money had been lavished on the celebrations themselves than on installing the Mapledurham fish pass and fish passes don’t come cheap. For when caviar and champagne form part of the hors d’oeuvre, you know it’s not your everyday sort of angling club buffet lunch.

On arrival at Mapledurham, we were immediately introduced to the American Ambassador, a couple of front bench MPs and various oil industry executives. I had to pretend I was head of British Waterways fisheries and knew something about salmonids and fish pass design! Each of the ladies present received a limited edition, specially commissioned painting of a leaping salmon. Christine’s copy was from memory number 61.

The year was 1990 and I was fishing three of four matches each week, mostly as what’s cruelly known as pools’ fodder, but that’s another story. A few days before our visit to Mapledurham, I had a major escape of pinkies in the car. It was the usual sort of mishap, a simple failure by yours truly to adequately ensure the lid was fully closed, with the usual results. A pint of pinkies had gained their freedom and pinkies just love hiding in carpets.

We had a few consecutive baking hot summer days, which speeds up the natural dipteran metamorphosis. As a result, a significant transformation of pupae into adult greenbottles took place whilst we were away enjoying the luxurious hospitality. By the time we returned to the car it turned out there were many hundreds if not thousands of greenbottles hovering at the windows, desperate to escape the overheated car.

The chairman of the NRA at that time was Lord Crickhowell. In one of those unfortunate twists of fate, Lord & Lady Crickhowell’s vehicle was actually parked up next to mine. To make matters worse, Christine and I arrived back at the vehicle at precisely the same time as our aristocratic companions. As Lady Crickhowell and Christine bade their farewells, I opened the passenger side door, at that stage oblivious to the days’ happenings inside the vehicle.

Like locusts from a Bible story, the massive swarm of anxious overheated greenbottles flew in the direction of the two ladies, causing much spluttering and anxious waving of arms. The two ladies instantly put their newly acquired oil paintings to good use as they repelled the attack and swotted away the advancing foe like two frantic whirling dervishes. Christine was simply mortified and I don’t think has ever really forgiven me. I rather like to think tales of the incident did the rounds in the upper echelons of British society for years to come.

Not long afterwards, whilst Lord Crickhowell was still NRA chairman, I applied for a fisheries post back in my old haunt of Anglian region. Alas, after what I thought was my best ever interview, the ‘sorry you has not been successful letter’ duly arrived in the post. It left me wondering if maybe, just maybe, those damn pinkies had somehow cost me an upwards career move. So as Bob Nudd might say, keep the lid on your maggot box and your maggots in ya catapult.