The 1985 division one national

Inexperienced anglers, born and bred on commercials and yet to fully grasp the heritage of our sport might sneer, but being part of a winning national team must be the pinnacle of achievement in any match angling career. It’s the angling equivalent of being part of an FA Cup, Ashes or rugby grand slam winning team!

1965 national champion Dave Burr can remember the day that Rugby Federation won the 1965 All England as clearly as if it were yesterday. He vividly recalls the atmosphere, the buzz leading up to the event, indeed the whole experience from a contest that took place more than 50 years ago. Will today's new starters, who think a 30 pegger is a big match, ever experience the magic of that era? 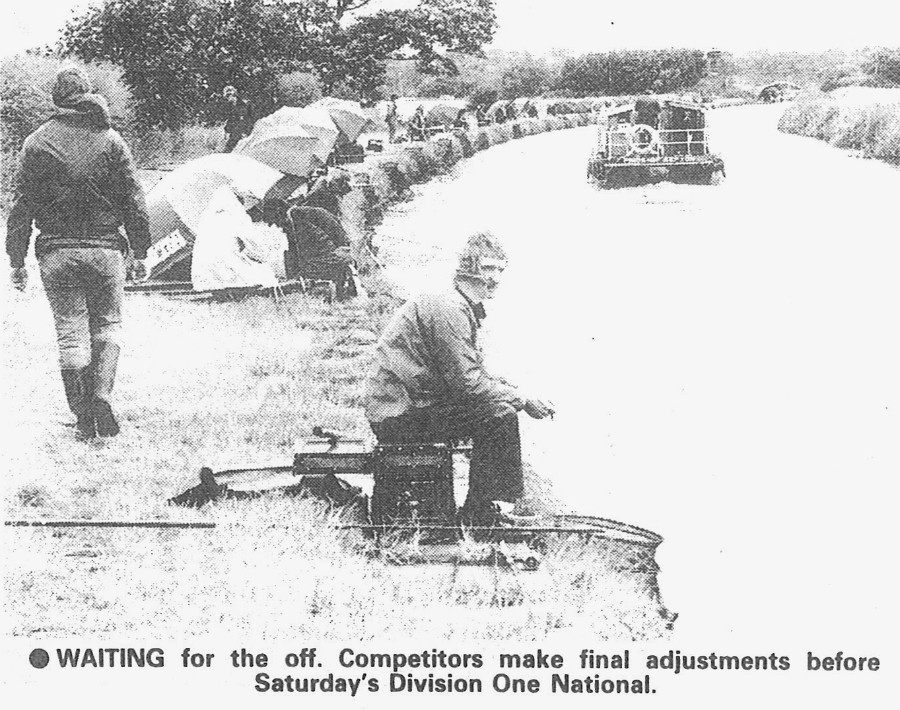 1985 was only the eighth occasion that a national has been held on a canal and only the third occasion for the top division. The venue chosen by the NFA was the western end of the Leeds & Liverpool Canal. In 1937, the north west based Groves & Newell took the honours on the Gloucester Canal and in 1963 Northampton Nene recorded a surprise victory on the same venue in a match won individually by Roy Sims.

The bookmakers made Liverpool Angling Society clear favourites with odds for other north west based sides such as Izaak Walton Preston, St Helens, Liverpool DAA, Stockport and Southport not especially generous. Other sides that some felt were in with a shout were Whitmore Reams, Coventry with the likes of Simon Nickless in the line up, the Cheshire sides Northwich and Wyche Anglers. The ever-consistent Barnsley Blacks, with England manager Dick Clegg and Ivan Marks in the line up, has been putting in the practice to perfect their narrow canal skills. In total, 79 team captains lined up expectantly on Saturday 20 July to draw pegs at the Aintree Racecourse headquarters.

Reports of the match highlight that the fishing was tough on the day.

There were complaints of too many spectators, reflection the huge interest in match fishing back plus gin clear water caused by a lack of passing boat traffic. A tough but relatively even venue must be a good thing though. For what match fishing should be partly about is testing skill and the ability to winkle out a few more ounces than other competitors around you. The pegging was much closer than canal anglers would demand today, maybe 15 yards or so apart compared to the up to 25 or so yards that competitors in this year’s division one event can look forward to. 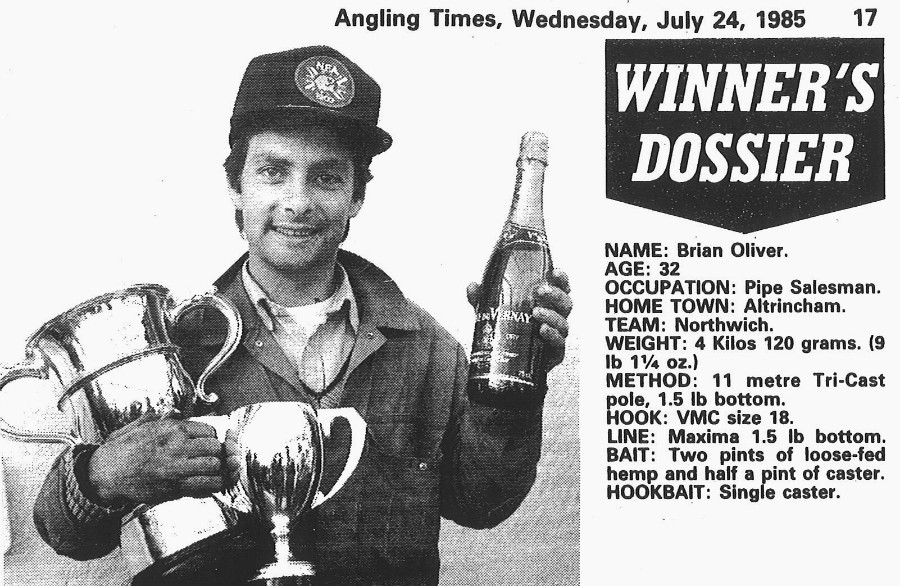 Fishing his first national for the Northwich team, Brian Oliver took six tench and some roach for a winning haul of 9 lbs 1 and one quarter ounces. As well as his place in angling history, Brian picked up around £5,000 in winning from the bookie and the NFA pools. He has beaten runner up Phil Jennings (Goole) by just six ounces. Two famous names completed the top four. Russell Foster, whose uncle Freddie Foster was the known as swing tip king took third spot with 8-5-0, again a mostly tench haul. Two pegs away was a true canal fishing legend, the great Kevin Ashurst 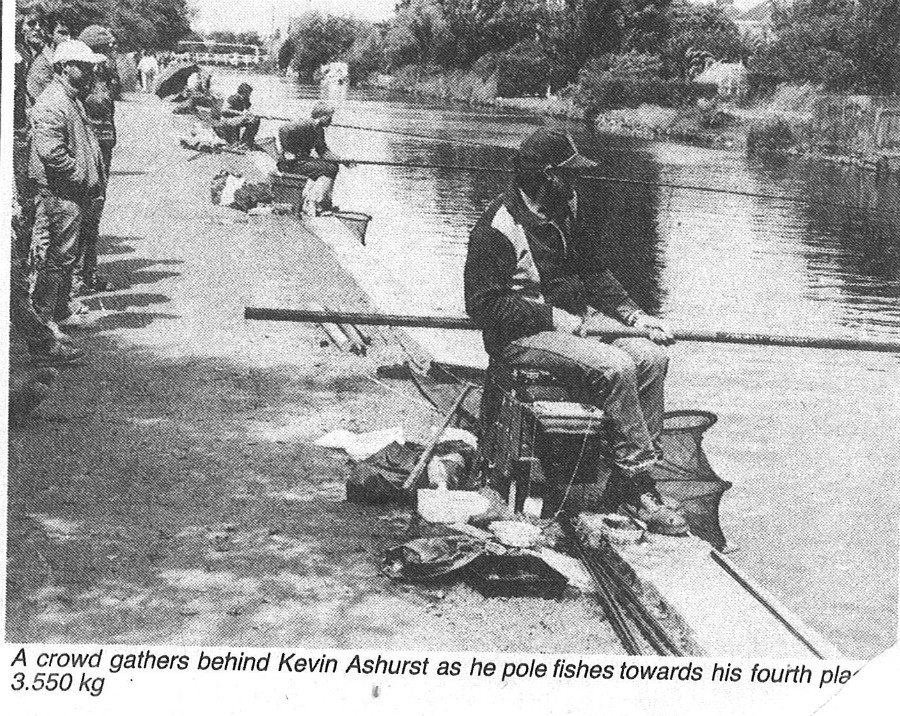 son of the equally legendary Benny. Representing Stockport, who finished 5th in the team stakes just behind Doncaster DAA, it was Kevin’s second fourth place finish in a national for he also managed that position back in 1969 on the River Trent.

As easy as ABC

To win a national a team needs a team of good anglers and a slice of lady luck. The ABC side, a contender for the title of top southern team of the 1980s, had both on the day. 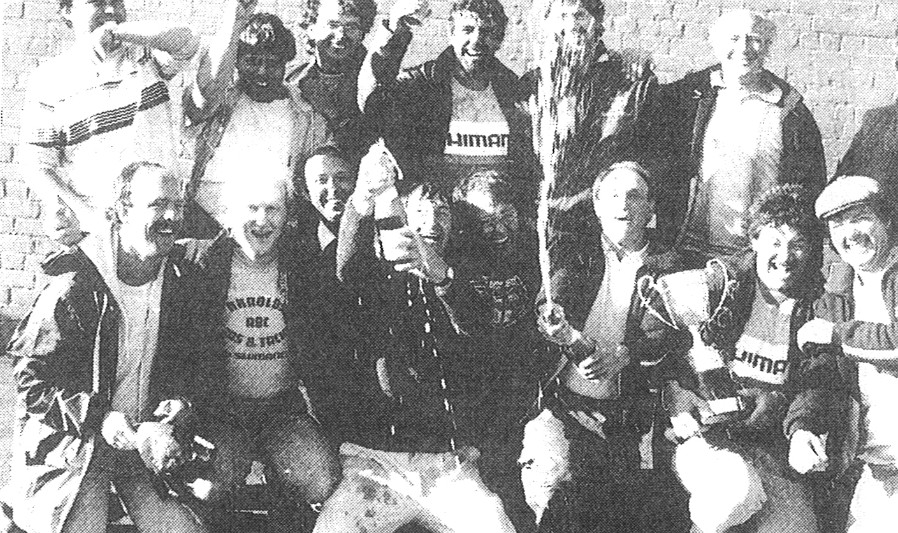 If you wondered where the name ABC came from, it’s the first letters of the three original founders, John Alma, George Butcher and the legendary Dickie Carr.

Their luck came with an end peg draw, but in Dickie Carr and Richard Borley they had two England internationals in the side. But two men alone doesn’t make a team and it was consistent performance from the whole team on the day that gave them a deserved victory. They can’t really claim it was their dedication to practice that won the day, for the team decided not to practice at all. They relied instead on walking the venue with local experts the day before the match plus on their own fishing ability.

Revenge over Barnsley Blacks and Southport

Having previously been runners up in the 1984 Division Two national to Southport and in the Captain Morgan Cup when they were narrowly beaten by Barnsley Blacks, ABC’s haul of 712 points was good enough to defeat hot favourites Liverpool AS by 11 points. The ever consistent Barnsley team took place third spot. The performances of their four internationals are particularly noteworthy. Denis White and Ivan Marks both scored 76 points, finishing fourth in their respective sections. Young Alan Scotthorne ended up with 70 points and the bionic bleaker Tommy Pickering who was to lift the world crown four years later, collected 66 points from J section. It's yet another illustration that those who reach international standard are true all-rounders who can master a wide range of venues

Thirty anglers dry netted but I will be kind and spare their blushes by not naming any of them here. For they have suffered enough, knowing that in some cases just one small fish could have kept their side in the top division or lifted their team up the table by quite a few places. Such are the ups and downs of match fishing and that’s why competitors love it, for you are only as good as your last performance.