Predation of fish by seals is still a key issue at the Barrage and though we know that seals predate salmon all the way up from the mouth of the estuary, the Barrage is certainly a key feeding location for both grey and common seals. Here we update you with the latest findings from our monitoring.

One of our most northerly assets is the Tees Barrage. Back in the 1980s, the Teeside Development Corporation were encouraged to construct the barrier with it formally opening in 1995. Ownership passed from English Partnerships to the then British Waterways in 2001. A fish pass was included in the work, which currently has provisional approval from the Environment Agency fish pass panel. A further fish pass was added as part of the upgrade to the canoe slalom course. There is on-going concern that seals are hindering recovery of salmon and other fish stocks. So, research has been on-going for some years. This article brings you up to date with our plans for 2017.

A fish pass at the Tees Barrage

Our current fish monitoring programme consists of 30 days ARIS (Adaptive Resolution Imaging Sonar) monitoring a year. This work is co-funded by the Environment Agency and Canal & River Trust. Aris monitoring involves using a special underwater camera that sends out high frequency sonar pulses. These pulses bounce off the surrounding environment and return to the camera. Software then processes the resulting echolocation data into an image that can be viewed on a computer. Sound waves produced then allow EA fisheries specialists to determine the size of the fish captured on film. 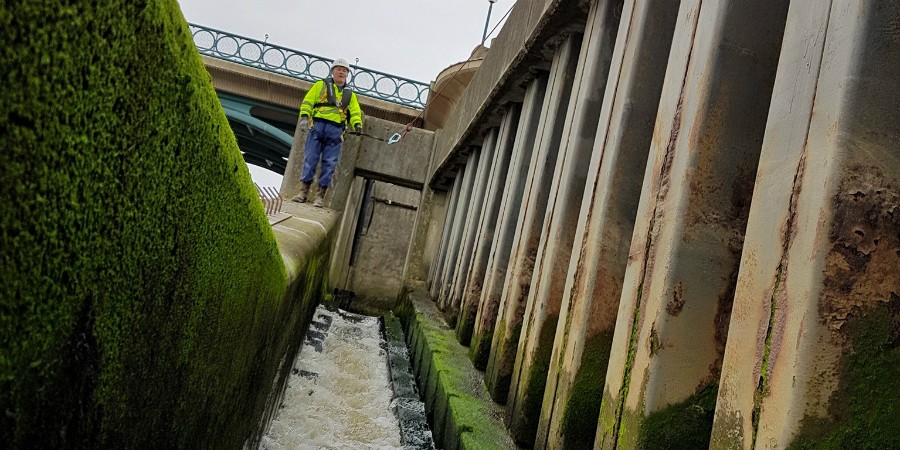 The current ARIS monitoring is designed to add to data collated from the previous fish tagging study carried out by Centre for Environment Fisheries and Aquatic Science (CEFAS), which was completed back in 2014. This study showed that the main route for migratory fish crossing the Barrage was over Flood Gate 1 at high tide rather than the original fish pass. So, 15 days this year will be spent monitoring fish movements across the flood gates and 15 days will be used to monitor fish passage through the navigation lock.

We know from the research we have carried out that salmon and sea trout use a variety of routes to cross the Barrage beside the flood gates and the fish passes. This year the steering group agreed to undertake some ARIS monitoring in the navigation lock where our staff and visitors to the site regularly see large fish moving through the lock; often followed by seals.

Predation of fish by seals is still a key issue at the Barrage and though we know that seals hunt salmon all the way up from the mouth of the estuary, the Barrage is certainly a key feeding location for both grey and common seals. During the previous CEFAS study we trialled Acoustic Deterrent Devices (ADDs) in front of Gate 1, with mixed results.

Adding seal deterants to the fish pass at Tees Barrage

This year we have decided to trial ADDs in the navigation lock as we believe that they may be more effective if operated in a more confined space. The ADDs are widely used on commercial fish farms. They work by operating a pulse generator and an amplifier that transmits audio frequency signals to a transducer, which are then converted into intense sound. This sound is on a frequency which is extremely uncomfortable for seals but does not impact on fish.

In our experience people under 25 years of age hear the ADDs when they are activated, despite them being located under water. Those of more senior years often can’t hear anything as the sound is transmitted towards the upper limit of what the human ear can register i.e. at around 20,000 hertz.

We know from our trials in front of Gate 1 in 2014 that some seals can over-ride the discomfort if they know fish are present but we are optimistic that in the more confined space of the navigation lock the ADDs may prove more effective. Watch this space.

Different types of deterant are trialed

As well as continued fish monitoring, we have also introduced a new gate clamp device designed by staff at the Barrage. It is designed to hold the navigation lock gates open at a width narrow enough to allow fish through but will exclude seals. The device can be operated remotely and despite initial teething troubles, early tests look promising. 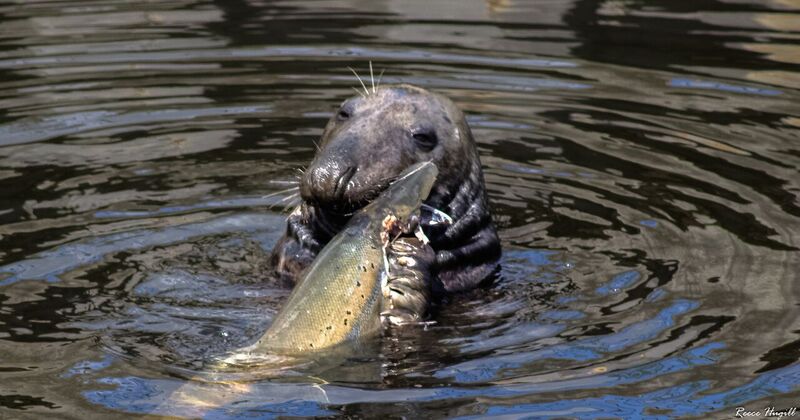 We are also continuing with our seal feeding survey, which has been running since July and will finish in September. This work complements the photo identification programme we are running which involves a volunteer photographer taking close-up views of seals feeding around the Barrage to see if we can identify individual seals from their behaviour and photo image. We’ll be reviewing all the results from all the trials and surveys we are doing this year in the autumn. We will then release all the information and reports hopefully around Christmas time along with details of our survey and monitoring programme for 2018.