Someone referred to me as our veteran fisheries manager the other day. I didn’t know whether to treat it as something of a compliment or call up my lawyer. Then it struck me, maybe I am a member of the veterans’ club. After all, it won’t be too long before the Angling Trust will permit me to enter the veterans’ national.

Introduction to Bert and his early angling career

But even then, I won’t be a genuine veteran. Last year we covered the exploits of Frank Posiak, still winning matches at 90. Our latest hero, whom one of our team met up with recently, is a little more junior than Frank. Bert Simmill, one of six children, was born in 1933 in Wolverhampton. He began his fishing career with his dad, Tom, on the Staffordshire & Worcester Canal in Penkridge at around eight years of age. His earliest recollection was being terrified as he had to duck under the ropes of the horses hauling the boats along the cut! At the age of twelve he won his first club competition, raising the Why Not Inn Annual Cup in Wolverhampton. He trounced fifteen adults using his mum’s special bread recipe with ground egg shells.

Bert began work as a core maker in 1947 before his employment was interrupted by the then compulsory military service duty. This saw him stationed with the Cheshire Regiment at Lichfield, Staffs. Later postings to Cyprus and Egypt followed between 1951 and 1953.

On his return from national service, Bert resumed his job and met the lady who was to be become his wife. Bert married Jean in 1955 and they went on to have two daughters and four grandchildren. He joined the Amery Angling Club in 1957 and won every cup on offer in his first year as a member. Bert was also a member of Walsall Izaak Walton and Swan Angling Club at that time.

After becoming great friends with Norman Duncombe, an angler fifteen years his senior, Norman took Bert under his wing in the early 1960s. The two travelled the length and breadth of the country fishing venues such as the Trent, Witham, Welland and Warwickshire Avon, competing in big events such as the Severn championships, the Woodbine Challenge and numerous Winter League finals in Ireland. They lined up alongside the likes of Ivan Marks, Billy Lane and Benny Ashurst in a host of big matches.

By then, Bert featured in the Whitmore Reans Constitutional Angling Association national squad. He was selected for the 1964 All England angling championship squad on the River Severn at Worcester in which over 1,200 anglers competed. Bert is listed in the official National Federation of Angling programme as first reserve, but stepped in when a fellow team member was unable to fish. Also in the Whitmore Reans team that day was Ken Cope, whose son, Steve, compiles our weekly match results column.

However, after arriving an hour late due to Army manoeuvres in the area, the team’s hopes of winning on this occasion were dashed, but still managed a respectable performance in a match famously won by Kidderminster & District Angling Association. Most of the Kidderminster team targeted bleak after the first hour, using primarily pole fishing tactics.

Bert lined up for Whitmore Reans CAA in the last All England national, again held on the River Severn back in 1971. The team line up on the 11 September of that year was captain Joe Brennan, J Antill, T Church, K Fijalkowski, D Fisher, R Haynes, A Homer, L Preece, W Walker, C Williams, B Rimmer plus Bert. Whitmore Reans ended up as the fourth team overall, weighing in 91-9-8, the match being won by Ivan Marks’ Leicester team. Bert’s Whitmore Reans team won the Europa Cup and silver medals. Ron Haynes was second individual in the match with a weight of 33-1-8. 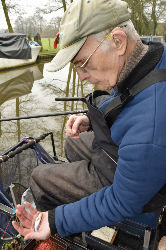 In his opinion, Bert’s most pleasing match was when he won the Birmingham Parks Semi-Final, fished on Edgbaston Reservoir. Walking the bank that day the great likely lad Ivan Marks commented, "If you see fish anywhere, doesn’t matter how far, go for them!" Bert did just that, netting over 9 lbs of roach that day. Bert went on to triumph at the 1978 240-peg CIU National on the River Welland in Spalding, bagging a dozen bream for 21 lbs in boiling hot conditions. The ever-humble Bert concluded, "My favourite mode of fishing has always been catching bream from the deep Lower Severn. Initially as a lad I used swing tips made from knitting needles that I half-inched from my sister." Recalling how there were often no maggots in the shops in the 1960s, Bert also learnt to breed his own ‘sour bran specials’ as the bream ‘absolutely couldn’t get enough of them’!

Being struck down with rheumatoid arthritis in the joints of his entire body in 1992, Bert feared his fishing days were numbered. However, with constant support and encouragement from his good friend Browning Lifestyle captain Steve Dudley, he rallied round with medication and physiotherapy. Also he began making his now renowned floats which helped his dexterity immensely. Bert said, "If it wasn’t for Steve I’d have packed up fishing. I couldn’t throw groundbait more than a yard nor drive and Steve took me everywhere." Perhaps the fishing gods decided to reward Steve and his partner Simon Nickless when the pair stormed to a convincing victory in the 2016 Canal & River Trust/Angling Trust Canal Pairs Final on the Staffs & Worcester Canal at Penkridge.

We have only scratched the surface of the many achievements of this enduring Black Country angling wizard who continues to this day competing on a weekly basis, plying his trade along the local Midlands’ towpaths, still framing regularly at club, open and veterans’ contests proving he’s still a force to be reckoned with. Stafford’s Tony Keeling remarked, "The banter is always entertaining sat next to Bert, but you have your work cut out to run him close in any match!"

If any team out there is looking for an angler with over 70 years of canal fishing experience to complete their 2017 Division One national team line up, then Bert could be your man. If he did end up fishing, would that make Bert the oldest national competitor ever?