Sharing the space tips for anglers

“When fishing I sometimes see anglers shouting at boaters for ruining their swim, when in fact I often catch a fish immediately afterwards. I’ve seen anglers shining their night lights at boaters, throwing bait at boats, arguing over whose right of way it is and more."

"It's all pointless confrontation and, whilst the occasional inconsiderate boater does cause problems, anglers are often at fault too. I’ve have great chats and stopped and had a cup of coffee with some boaters, It's all about respect, which there is sometimes a lack of today."

Why good manners are important

The above observation was sent to us recently by a concerned angler. It triggered the thought that it would be a useful exercise to set out some guidance on the dos and don’ts of achieving peaceful co-existence with boating customers. It can’t be denied that the lack of good manners by a small minority of anglers can get us all tarred with the same brush.

Read more about Sharing the space

It costs around £200 million per annum to run the waterways, most of which are in their third century of existence. Boaters, anglers and canoeists all pay for the right to use the network. As no one customer group currently provides the £200 million worth of funds to maintain the network, it’s a logical conclusion to reach that the network should be shared amicably and people co-operate for the wider benefit.

Some places are out of bounds to anglers and fishing in the lock chamber is an absolute no no. Our agreements with clubs are every clear when it comes to fishing near locks, it states 'fishing is prohibited in a lock and within 25 metres of a lock wall approach or moveable bridge used for navigation’.

The 25 metres distance was chosen as the length of one boat mooring. In busy peak navigation periods, it makes absolute sense to leave more room than this. It’s very much a case of using a sensible judgement and understanding the likely volume of traffic on your local waterway. 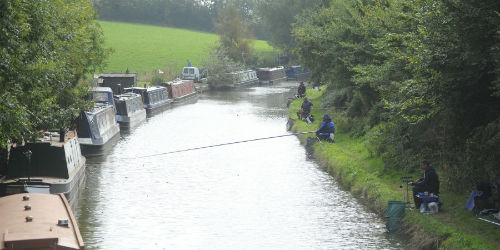 Fishing opposite boats is permitted. If it were not, large chuncks of our waterways would be out of bounds for fishing. This would be against the spirit of the principles of share the space. However, it is imperative that anglers take special care when fishing opposite craft. The critical thing is to prevent getting tackle and bait on boats and not making excessive noise as explained in Simon Mottram's helpful video.

Removal of bait and tackle as a boat approaches

A moving narrowboat in the process of navigation has priority. They can’t suddenly slam on the brakes if an angler leaves their hook and line in situ for too long. So, it’s the responsibility of the angler to get his equipment clear in good time. Lifting the pole high into the air is the solution that most match anglers adopt. The obvious alternative is to bring the tackle in to the bank. Occasionally an angler will hook an especially large fish which can then take some minutes to subdue. The best the angler can hope for in those circumstances is to bury the rod or pole tip under the water and hope that the line does not get broken.

Boaters keeping to the middle

The Trust requests boaters navigate down the central channel when cruising past anglers and maintain a steady speed. Anglers should not request alternatives such as asking boaters to go over to the offside. This would lead to inevitable confusion. The same advice applies to canoeists, i.e. stick to the central channel. 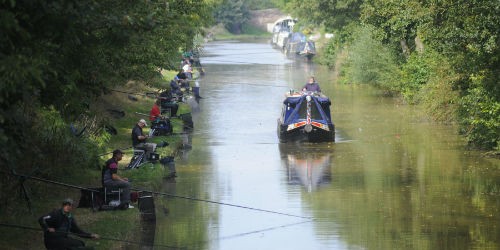 At some visitor mooring sites, you will find signage that restricts angling activity. Naturally, the wording of official signage should be adhered to, not least because it could be a byelaw offence to ignore the instructions on Trust signage. In the absence of signage, the use of the towpath is on a first-come-first -served basis. Angling club agreements state ‘Licensees or permitted users should not actively obstruct or impede the mooring of craft at locations signed by the Trust as being for the purpose of mooring but for the avoidance of doubt nothing in this clause is intended to prevent fishing from signed mooring locations when there is no craft present at the mooring and there is no craft wishing to use a mooring.’

The needs of angling customers are incorporated into the terms and conditions of the issue of these permits. A five-metre gap must be kept between one boat and the next for the purposes of permitting angling from the towpath. We are exploring whether this ought to apply more generally between moored boats. Do take special care when fishing within close proximity of boats. It would not be acceptable to lean your equipment up against the boat hull, for example.

Fishing where you find moorings rings

Unless so signed to the contrary, anglers are permitted to fish where there are towpath mooring rings present, in a similar way to boaters having the right to moor where there are angling club permanent peg numbers. Mooring rings might be present underneath powerlines or within 25 metres of a lock wall approach. Clearly, fishing would not be permitted in these locations.

It’s fair to say that these days we don’t get the long period of ice cover that I recall as a youth growing up in North Shropshire. I have used bricks and lumps of metal as icebreakers and have even heard of chain saws being used, which might cause our head of health and safety to undergo some sort of coronary arrest if he happens to be reading this. Ice breaking is a noisy activity bound to awaken all but the most inebriated from their early morning slumber. It’s only courteous to let any resident boaters know in advance if major ice breaking activity is planned.

Often known by anglers as turning bays, winding holes were built to allow boaters to turn their craft around. Boaters clearly have priority here and whilst anglers may choose to fish at winding holes (they are renowned for being preferred habitat for shoals of bream) they must fully expect boaters to use these facilities. It’s the angler’s responsibility to take any necessary steps to allow the boaters to go about their business without obstruction.

A similar situation applies to marina entrances as to winding holes. Whilst there is nothing preventing an angler fishing opposite the entrance to a marina, the boat entering or exiting does have priority and you should bear this in mind when choosing to fish at these locations. Unless granted permission by the marina owner or operator, you are not entitled to cast into the marina.

The Trust’s agreement for fishing rights is silent on the matter of night fishing. The decision as to whether to permit it is therefore one for the controlling club. The Trust introduced night fishing at some of our reservoir sites such as Drayton, Clattercote and Naseby as the anglers act as eyes and ears to help reduce the potential for crime such as fish theft and increase the security at sailing club premises. Night fishermen at Wilstone Reservoir witnessed the illegal shooting of swans and duly informed the police. On the canal network, anglers should bear in mind that they might be fishing opposite someone’s home or in a residential area. Behaviour should reflect that, e.g. keeping noise and the use of lights to a minimum.

The call of nature

It’s perhaps not as well advertised as it could be, but the Trust’s sanitary stations are available for all to use. All you require is to purchase a standard key from our online shop.

Unfortunately, the Trust simply doesn’t have the cash to provide these sorts of facilities at all locations. If you really must go, and this advice applies equally to anyone to anyone using the network who finds themselves caught short, then exercise sensible discretion appropriate to the location.

Too much boat traffic? 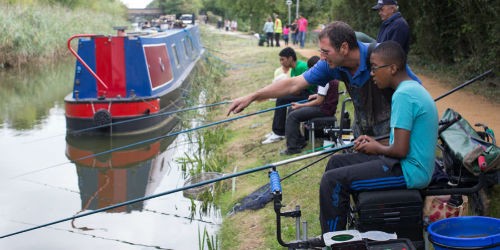 We anglers can be funny creatures, there are always too many boats or too few boats, rare is the occasion when it’s just right! I recall in my match fishing youth going bite-less on a clear cut until two boats came through in rapid succession. The fish then switched on as if by magic. In the long run, canals not open to navigation become derelict waterways, great fisheries for a while but they suffer in the long run.