The Canal & River Trust are proud to be a founding partner of United by Birmingham 2022. Our Let’s programme will be part of this initiative, hence 2022 will see plenty of Let’s Fish activity on the canals in the West Midlands.

This will include the borough of Sandwell when 40 years ago, Ken Duffell was running the Sandwell junior passport to angling scheme that he set up as a volunteer in the 1980’s. This is Ken’s story.

Concerns of declining numbers of young people going fishing are nothing new. Promoting health and wellbeing benefits that fishing offers to participants is not new either. One day, I had a call from Sandwell Council Leisure Department inviting me in for a chat with them to consider, as a volunteer, putting together a regular programme teaching young anglers the skills and techniques of fishing, water safety and care for the environment right across the borough of Sandwell.

For some years, I'd been an angling columnist for various local newspapers in the West Midlands. Hence, I had good contacts with the match angling community and had also been organising local kids contests for many years. Coincidentally, I’d just been made redundant from my full-time occupation as a precision toolmaker.

So with some time on my hands, I accepted the challenge and opportunity to plan an idea that had always been on my mind. One immediate consideration was to come up with a popular name that would involve the boroughs name and promote the popular activities. Thus the ‘Sandwell Junior Passport to Angling’ was created and was followed soon after by Sandwell Passport to Cycling and Sandwell Passport to Artists. 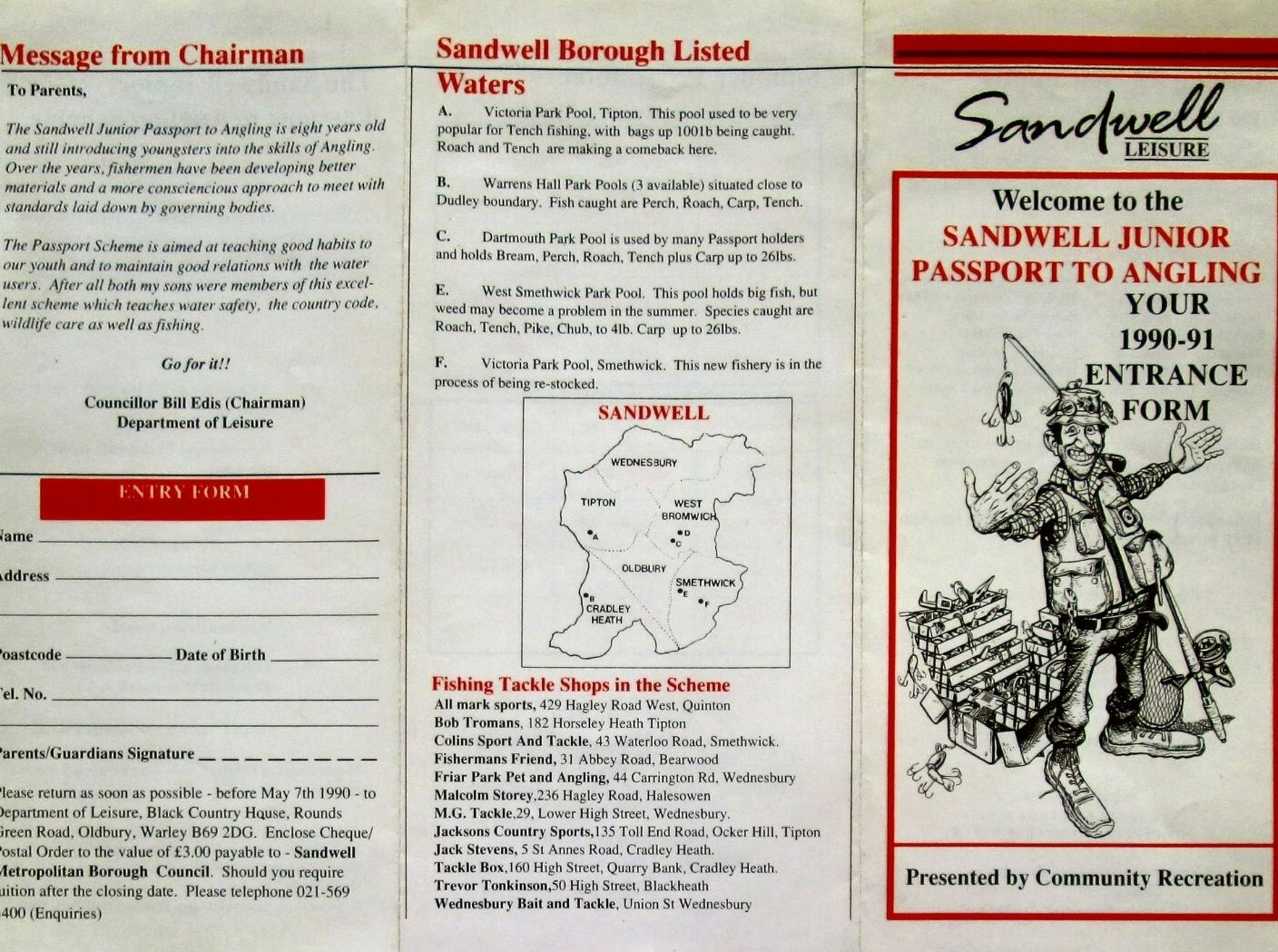 My second task was to set up a small committee to oversee activities and a temporary holding body for any grants awarded to voluntary organisations. The Sandwell Anglers Council was set up for this purpose. Relying totally on actively competitive match anglers and schools to always be available to deliver coaching was in my judgment a trifle too risky which proved to be an accurate assessment.

Without exception though, those match men I approached applauded the idea and wished me well. Sandwell Leisure Department was instructed to support the scheme from the outset, which was a positive and saleable asset to have. There was no magic pot of gold to fund delivery (a challenge that Let’s Fish faces all these years later) but everybody who was anybody put their name to the programme including Northern Ireland fisheries and Irish Fisheries Boards even giving prizes of free week ends away in the Emerald Isle.

The scheme was launched in 1982, the year that Kevin Ashurst became world champion, with all fishing tackle and volunteers in place.

This including a handful of match anglers who had come forward promising to give their time to ‘hands on’ coaching in their spare time. Coaching qualifications and police checks was not a requirement then. I actually acquired mine in 1989.

Our programme attracted a lot of juniors in the first year and grew each year to a point where we were able to employ admin staff through grants which secured the programme of activities both in the winter which included classroom type instruction as well as during the summer months.

The success lay in getting the backing of the Sandwell Council who were willing to create the new scheme that offered alternative activities to young people during out of hours schooling.

One of the venues we successfully developed for the passport was Swan Pool. The Sandwell Valley Sailing Club had not allowed fishing on the Swan Pool since it was originally developed in the 1950s. However, all that changed in 1983 after I presented proposals to committee and later we had it restocked with roach and tench.

During its lifetime, the ever-popular Ken Aske of the Starlets, Ivan Marks, Clive Smith, Mark Downes, Des Taylor and England Manager Stan Smith to name a few all came on board. I remember Ivan Marks was showing various kids how to catch perch on Swan Pool Sandwell Valley one time until we went back to one lad who asked if he could go back to how his granddad had set him up because it was working better? In his keepnet were six tench up to 5lb in weight. Ivan looked at me and said, what do you think of that, Ken!

Over the dozen or so years the scheme ran, we had over 900 different individuals take part. The initiative was useful to me personally in another sense. I was out of work with no income except from what came in from my angling columns. I was offered a job to head up a Youth Opportunities Programme scheme building play structures in 1981 for three years.

However, after that scheme finished, I was in a position to apply successfully for senior management positions and finally retire in 2004 as Sandwell Principal Heritage Officer based in Sandwell Valley Country Park. I was never paid to run the angling scheme, that side remained voluntary until grant funding dried up in the mid 1990’s and the scheme closes down.

I first met John Ellis in the late 1980’s. If memory served me correctly it was at an angling show at the NEC. We’ve kept in touch over the years. I always sensed he was keen to get something like Let’s Fish off the ground but the moment had never before quite presented itself. I wish their great Let’s Fish work continuing success and if I was a little younger, I would rush at the chance to get involved helping deliver the programme. If you would like to get involved as a Let’s Fish coach or volunteer email fisheries@canalrivertrust.org.uk