This blog is brought to readers courtesy of Graham West, a member of the 1992 Image Black Horse NFA Division Five National winning team.

Six divisions, 80 teams in each division, 70 buses – all waiting to take nearly 1,000 anglers to their pegs, each and every angler hoping that lady luck was shining on them in their biggest match of the year. I am, of course, re-living the national team championships which were, without a shadow of a doubt, the most important match of the year for most competitive anglers. At the end of the match we eagerly awaited the announcement of where next year’s national would be, rarely if ever did that news leak out ahead of time.

For all the competing teams in each division, next year’s national date had so much importance. The chosen venue would be closed to competitors for the whole week leading up to the day of the national, so the week or two weeks before the big day would usually be the block practice period. All personal family holidays would be booked around that week so as not to ruin your chances of getting picked to represent your team. We poured over articles like Dave Roper’s pre national thoughts. 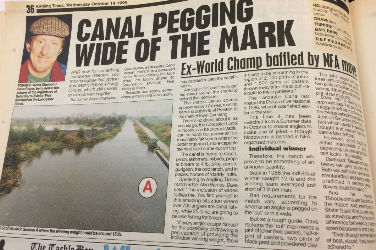 During those golden years of nationals, my team was Image Blackhorse. I like to think that we were a team of pretty awesome anglers. When we won the 1992 National the line-up comprised of Mark Pollard, Rob Hewison, Myles Phillips, Lee Newson, Mark Bird, Kevin Folwell, Mark Rudd, Tad Jones, Kevin Withington, John Haseler, Alex Graham and myself. The Team manager was Vince Baron and Mark Bird who now lives in Denmark as captain. There were obviously a few more members in the squad, however the above list was the team that represented us when we clinched that Division 5 title. A lot of the lads are still fishing now, some competitively on the match circuit, some fish purely for fun whilst others just don't fish at all.

Lure of the National

In those days when nationals were definitely the biggest match of the year, team fishing was at its most competitive. It seemed as if every pub factory, working men's club and angling club had a ‘national’ team. Every angler selected to fish for their team went to sleep the night before praying for the golden peg and hoping it was going to be their day. The excitement on the morning of the match was intense. Amongst other things this was because of the big pay day which awaited the individual champion. The then National Federation of Anglers, (NFA) which eventually merged with four other organisations to form the Angling Trust, would pay out up to £2,000 to the winner. Add on top of that the familiar face of Billy Knott bookmakers, because providing you paid the full each way bet, you could leave with a cool £6,000 of cash for your troubles! To put that into perspective, when we won the title in 1992 I was earning £120 a week. So I could potentially have earned a year’s wages for five hours work. That was the lure of the nationals.

I can vividly remember our weeks’ practice. Captain Mark Bird was so intense and determined in his preparation plans that we went to two different areas of the canal every day. We fished from 0900 until 1200, before packing up and then moving to another area and fishing from 1400 until around 1800. It was then a quick dash back to the hotel for a clean-up and back down for dinner within the hour. A serious chat about the days findings over a few beers took you the rest of the evening and then back to bed to do it all again the following day. 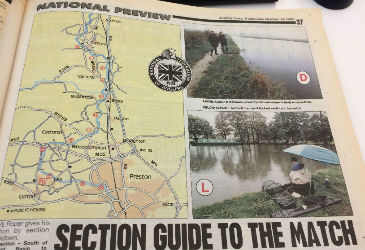 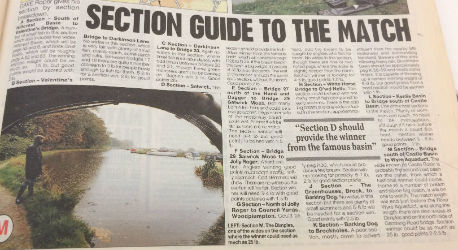 A few months before nationals on venues that were not in our back yard, we would be in contact with a local venue expert, asking them to help us out with methods and the venue's boundaries for the coming national. For the Lancaster Canal we acquired the help of canal star and now joint England boss, Mark Addy, who it also turns out was coaching the eventual runners up too. In those days Mark was a key member of the Highfield team and his knowledge of joker fishing on the 'Lanky' was second to none. He put us dead right on methods on the clear and shallow northern canal.

Being a canal based team, we wondered whether an end peg draw would be the best draw on the day and asked Mark his view. "Only after the first frost" was Mark’s reply. With the weather being mild every day whilst practicing, we were hoping to avoid the end pegs. After five days of intensive practice, we headed south from the venue full of confidence, hoping for a favourable draw on the big day in one week’s time. The morning of the match soon came around. We all stayed up north the night before, just in case someone broke down getting there on the morning. I can remember waking up and looking out of the window. Wow! A rock hard frost; the first frost of the year.

As we stood taking our gear out of the cars, Myles Phillips was already in the draw queue. As the teams did their draw, their peg number would be announced over the Tannoy system. Next to draw were Image Blackhorse. A few seconds later and it was announced that Image Black Horse had drawn peg 1. I remember looking at my travelling partner Lee Newson, we both looked at the frozen ground, an initial moment of silence and then a little smile as we recalled Mark Addy’s words about the first frost and an end peg. Could it just be our day?

An individual win by Myles

Off we went to get on our designated coaches to take us to our sections. Five hours of fishing flew by and I can remember arriving back at the headquarters like it was yesterday so well. We had all done really well in our sections, including three sections win, apart from poor old Rob Hewison. Rob had drawn completely the wrong end of his section. With the canal where he was pegged being particularly clear and everyone in his section walking in from the same bridge, a lot of the fish had been walked away from Rob’s peg adjacent to the bridge hole. Myles Phillips had drawn peg A1 and made no mistake by not only winning his section, but winning the national individually too with a weight of 6lbs 9oz 8 drams of roach and skimmers. 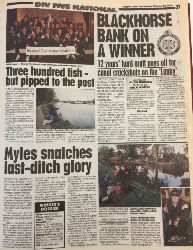 Had we done enough?

I'll never forget the tension of those few moments. We were all huddled in the middle of the arena. Everyone had done really well, but we knew Rob had only scored eight points despite his best efforts. We knew that it was going to be a very close run thing between ourselves and the Swinton Angling Centre side. In second place with a points total of 689 points were Swinton Angling Centre boomed the announcer. It was then we thought we'd won, but we couldn't jump for joy until it was official. Then followed that moment I'll never forget as the result was formally announced. This year's Division 5 national champions from peg 1 are Image Black Horse! That was it. We jumped for joy. I’ve never felt so nervous listening to those results as the announcement went in reverse order from 10th down to 1st. I think Rob Hewison must have been black and blue in the morning because we all jumped on top of him.

As the years went by fewer and fewer teams entered the nationals. The number of divisions dropped from six at the peak and at the present time we are down to two nationals. Will we ever re- live those glory days? Probably not in terms of number of competing divisions or teams, but I think we can be optimistic that nationals, which have been going for well over 100 years, are not to be consigned to history just yet. I do hope so as I'll never forget the memories of that day; they will stay with me forever.