He’s competed in almost 10,000 matches, fished against some of the sport’s biggest names and even had to escape from the Nazis to continue his hobby.

Colleagues at Angling Times recently met up with Frank Posiak, one of the UK’s oldest match-men. At the ripe old age of 90, most anglers would have packed up the sport long ago. Not Frank. Born in Poland back in 1926, the Derby based angler is still going strong and isn’t stopping anytime soon either. Discover more....

Q: When did you start match fishing?

A: I began competing in matches in the late 1950s where I started fishing for a factory team. I wasn’t very good to start but eventually grew into it and started fishing in more and bigger events.

What sort of venues do you like to fish?

I really love canals. I have match fished on canals all over the country from my favourite venue, the Erewash canal near my home, to cuts like the Leeds & Liverpool up north. However, I fish commercial pools and club stillwaters too, but I don’t like carp ponds too much as the fishing is too hectic. Before all of these I used to match fish on rivers like the Trent and Welland as that’s where all the big events were held. Nowadays I don’t care as much as long as I’m on the bank. Catching fish is a bonus.

How have venues changed since you started fishing?

The canals in particular have changed dramatically. There used to be no boats back when I started and the canals were full of fish including some real monsters. The fishing is much more of a challenge now.

How has the tackle changed since you started match fishing?

I remember fishing with just cane rods and centre-pins but now its super light poles and strangely shaped swim feeders. People bring tonnes more kit on the bank nowadays. I brought a new box recently but it’s too heavy for me so I went back to my old plastic Shakespeare one.

How often do you fish?

I still like to fish three matches a week, including open events, when I can and even fish the Senior National once a year. I rarely pleasure fish as I don’t like going out on my own and prefer the camaraderie of match fishing.

When I was four years’ old in my original country of Poland I used to just pleasure fish on rivers. I had to stop fishing during my teens though, as I was posted to work in Germany after they invaded. I then escaped before nearly being killed at the French border by a British plane attacking the Nazis. After that I was taken to Italy to work in the army where I met the likes of Field Marshall Montgomery at the end of the war before coming to the UK where I worked as a labourer.

Which famous anglers have you competed against?

I fished against the likes of Tommy Pickering and Bob Nudd but before them I used to fish against most of the old Trentmen from the 1960s and 70s and also some of the Leicester Likely Lads including Ivan Marks, whose books I used to read.

Who is your favourite all-time angler?

I don’t really have any heroes like many anglers do but I admired Ivan Marks more than anyone. I remember one humorous incident fishing in the same section as him. It was a hard match on the River Welland and I could only muster around 3lb of small fish. Rumours spread that Ivan had netted some nice bream so I threw all my fish back before the end. Later I discovered Ivan had won the match with just two lbs. I was gutted.

Do you have plans to stop fishing any time soon?

No, I will carry on as long as I can walk to my peg. I fish in all weathers and all seasons and luckily I fish with some great guys in the clubs I have joined. They help me out, give me lifts to venues and help lift my gear. I owe them a lot.

Have you enjoyed a lot of success on the match circuit? 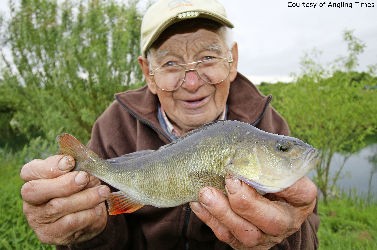 Despite my age and my iffy hearing I still win matches. Just two months ago I won an open match on the Erewash Canal at Cotmanhay and the year before I broke one of my local club records with 76 lbs of double-figure carp. I also came second in a five-match open league last year. I win sections quite often so I like to think I am far from just pools fodder.

What is your favourite method?

I rarely fish with a rod as it’s too much hard work for my hands so pole fishing is my favourite. I am a big fan of fishing with worms. In fact I’m known on the circuit for using them a lot in matches.

Do you have any other hobbies?

Not really but I do upkeep my allotment. Fishing is my life.

Find out more about other angling heroes