When most people think about mussels, they’ll either think about coastal rock pools or the French dish Moules Marinara. However not many people are aware of their freshwater cousins, which include the diminutive Pea Mussel, through to the large and more common Swan Mussel.

Pearl mussels were once common in our rivers, but they have now suffered a severe decline in the late 20th century. They are classified by the Internal Union for the Conservation of Nature, (IUCN) as being critically endangered which, like the European eel, makes them more likely to become extinct than the giant panda. There are about 500,000 individuals in the wild and they are getting older. Whilst they are breeding successfully, none of their off-spring are surviving – this is a recipe for extinction!

The FBA is leading two exciting projects focusing on conservation of the freshwater pearl mussel margaritifera margaritifera to form a conservation strategy for the species in England. Both projects are supported by Natural England and the Environment Agency. These projects aim to: 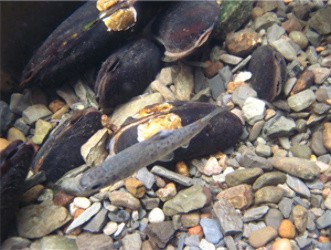 I was lucky enough to have a tour of the FBA freshwater pearl mussel hatchery last year to see the work that they are doing to help this critically endangered species.

So the big question is, do they have pearls inside them? 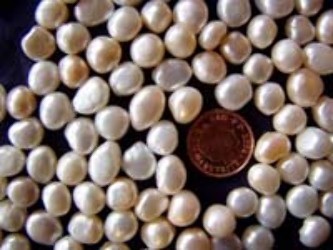 Yes, in fact this is one of the factors that led to their decline, along with poorer water quality. They were coveted by Julius Caesar and kings throughout history. There used to be a trade in them, but only a small percentage actually produce a pearl. According to reports some of the skilled ‘pearl fishers’ could prise open a mussel, to see if it had a pearl inside, without causing too much damage. Unfortunately, in more recent times they are just ripped apart in the search for pearls, with little thought of what they are doing to the long-term viability for future generations.

Don’t get excited about a ‘get rich quick’ opportunity; they are a protected species. The freshwater pearl mussel and its habitat are fully protected by law, under Schedule 5 of the Wildlife and Countryside Act 1981 (as amended) and Annex 2 of the Habitats Directive.

You’re breaking the law if you:

If you’re found guilty of an offence you could get an unlimited fine and up to six months in prison. 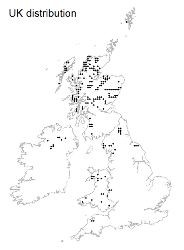 As eluded to above, over-fishing played a part in the decline of the pearl mussel, but this also happened when there were other pressures, including water pollution from the industrial revolution, the numbers of salmon returning and overall water quality. This decline was also felt throughout their natural global range.

Once a fairly wide-spread species it is now limited to a small number of upland rivers, with a stronghold in Scotland.

Put simply, they need a river that supports healthy salmon and trout fisheries. It needs to have a good supply of water of a high standard, along with clean well oxygenated gravels.

If you’ve never come across them before, then the details of the life-cycle are somewhat surprising. A male and a female pearl mussel is needed, so yes they have two separate sexes. The male then releases sperm into the water in June to July, where the females can then use it to fertilize their eggs. Between July and September, a single female can release between four million to 16 million babies called glochidia into the water. These tiny juveniles, each measuring 60-70µm, find a passing salmon or sea trout and attach themselves to their gills. As water passes over the fish’s gills, the glochidia snap shut onto the gill filaments. They become encases (encysted) within the gill tissue and grow there until the following spring when they drop off the fish in May or early June. At this point they measure approximately 400µm in length. The juveniles must land in clean, well oxygenated gravel substrates where they will burrow into the gaps in the gravel where they will continue with their development. 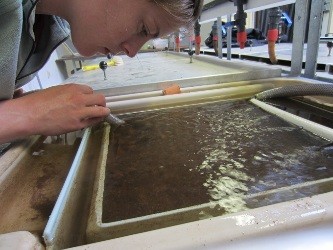 The Freshwater Pearl Mussel Ark Project has been running at the Freshwater Biological Association since 2007. They have a hatchery and are breeding mussels from a range of rivers, with the aim to ultimately re-introduce them. Because they are so slow growing (taking around 12 years to become sexually mature) they will only now be thinking about releasing the older captive-reared juveniles. 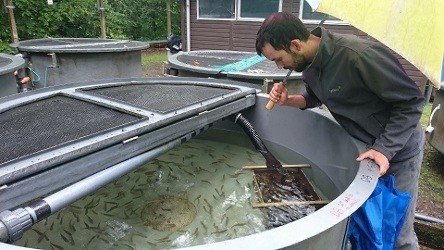 They plan to tag juvenile mussels and relocate them back to the catchment from which their parents came. The tags will help them monitor these new releases over future years. This will help to determine how successful the releases were.

How can you help?

Help spread the message that we have species in our rivers that are on the verge of extinction and that we can help to reverse this trend. Make a donation to the project; the FBA would be very happy to take donations to keep the project running.