If you fancy a few days’ carp fishing over the festive period and you have been struggling for bites, then Drayton Reservoir could be the place you are looking for to get your confidence back.

The recent wet weather means the reservoir has filled up nicely just in time for the Christmas holiday period and the new night fishing facilities are now fully open. For further information, including how you and your mates can now reserve your slot for a night fishing session, call Mark or Angie on 07889 532563. 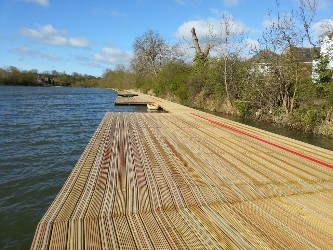 The official opening of the new night fishing platforms at Drayton took place back in the summer. Our chief executive Richard Parry was on hand to cut the ribbon and to formally declare the new facilities open. The final bracing works were completed earlier this autumn once water levels had fallen sufficiently to allow the work to be undertaken in the dry.

Alongside its neighbouring reservoir in Daventry, Drayton was constructed in the years shortly after the 1793 Grand Junction Canal Enabling Act passed through Parliament. The reservoir constructed at Drayton was originally known as Middlemore Reservoir and is located in what was once a very rural setting.

Its primary purpose was and remains as a water supply reservoir for the nearby Grand Union Canal. It feeds the summit pound with water, flowing downstream through the Braunston flight in one direction and through the Buckby flight in the opposite direction. History does not recall who originally stocked the reservoir with fish, but the purpose would almost certainly have been for food supply.

Myself and Keith Fisher were appointed as fisheries managers by British Waterways’ head of fisheries, Tom Leatherland, on the same day back in 1988. Drayton was originally in Keith’s patch. British Timkin Angling Club held the agreement for the fishing rights until around 1986 but had not renewed.

For a while thereafter the fishery was bailiffed by Alan Cowan from Hillmorton, who was also the bailiff for the directly managed North Oxford canal fishery. For a brief period subsequently, the fishery was rented by former Coventry stalwart and renowned canal match organiser, Pat O’Connor. With the fishing world changing and the arrival of the heavily stocked commercial fishery on the fishing scene, British Waterways were exploring options of the development of some of its reservoirs along these lines.

As it turned out Drayton was the ‘guinea pig’, with subsequent developments eventually including Clattercote, Boddington, Stockton and Earlswood Engine Pool, along with the acquisitions of Blythe and Makins. 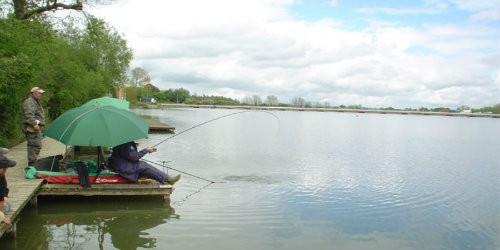 The Mick and Maureen Carrick era

Following its draindown in 1992 and subsequent restocking with carp, the revamped fishery opened for business in the summer of 1993. Mick Carrick, who had taken early retirement from Ford Motor Company, stepped into the head bailiff’s role. Along with partner Maureen, Mick played an instrumental role in putting the name of Drayton firmly on the angling map.

Bailiffing involved walking several miles each day and at the end of day one Mick was out of breath. He had a choice of giving up bailiffing or giving up smoking and luckily he chose the latter. The original walkways and platforms, built to accommodate more than 120 pegs, were opened on 16 June 1994, because in those days the close season was still in force on stillwaters and most canals.

At British Grand Prix time, the Ferrari Grand Prix racing team used to stay at the hotel opposite the reservoir. The great Michael Schumacher was once admonished by Mick for carrying out a training run along the reservoir walkways and putting anglers’ equipment at risk of damage.

Back in the 1990's and early years of the new millennium, the fishery was a match-orientated venue. There were literally hundreds of match bookings taken annually from dozens of clubs up and down the land.

Research undertaken by British Waterways back in 1997 showed that match bookings had been taken from every county in England other than Cumbria, Cornwall and Northumberland. More anglers travelled down from South Yorkshire than from any other part of the country. It was almost seen as Sheffield’s home water.

Drayton established a reputation for producing huge match weights, culminating in Sheffield’s Steve Gregory breaking the UK match record at that time with over 360 lbs of fish in a five hour open contest. Many matches were won with 100 lbs plus and such was the popularity of the venue that on busy Sundays one club would take over the pegs for an afternoon match, once the morning match had weighed in and departed. 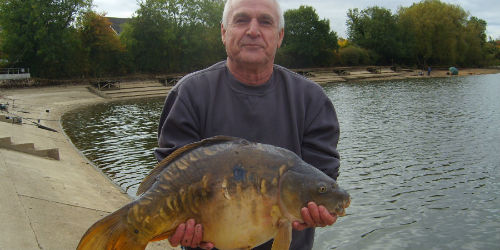 Although we didn't perhaps fully appreciate it at the time, it was inevitable that the Fishers Pond strain of carp would put on weight and that eventually the fishery would evolve from a match fishery to the specimen type water that it remains today.

When Mick Carrick retired, Geoff Spencer took over the reins for a while. When Mark and Angie Ryder took over the day to day management of the site under license from British Waterways, now Canal & River Trust, they quickly saw the potential of the specimen fishing side of the business. One of their initiatives was to oversee the re-introduction of night fishing. 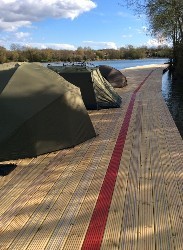 Latest development in the history of Drayton

We have many competing priorities for our limited financial resources and therefore the allocation of funds for the next phase of Drayton’s evolution has perhaps taken a little longer than some of our angling customers would have hoped. Be that as it may, the good news is that we now have in place facilities to accommodate nearly forty night anglers. The new platforms are designed to meet the needs of customers who want to fish overnight. Aside from the old boards area that can accommodate up to 10 anglers, the new bivvy friendly platforms accommodate either two or three anglers.

Recent years have seen significant housing development around Drayton. It’s imperative that our customers respect the needs of nearby householders and do not cause unnecessary disturbance at the same time as enjoying their hobby at Drayton.

So please keep noise levels to a minimum at all times, especially whilst enjoying the night fishing on offer. Do not risk the wrath of fellow anglers by putting these night fishing facilities at risk.