Dave Watkins: A life in angling

In this latest guest article Hodnet legend, Dave Watkins, recalls some of his happiest angling memories.

My earliest fishing expeditions occurred when I was approximately eight years old. They were with my friend Ted Cartwright and we went to fish a small pool on the Hodnet Estate in North Shropshire, where we would angle all day with some bread and a few garden worms.

This would be a lasting friendship which, together with a group of friends, would ultimately lead to the formation of Hodnet Working Mens Angling Club in the 1970s, the forerunner of today’s Hodnet Angling Club.

In the early 1980s, the club was offered the opportunity to rent the fishing rights on the Shropshire Union at Goldstone. A prolific stretch, it attracted fishermen from all over the area and led to the start of many open matches, which also benefited the club financially.

I have been privileged to have been involved in the running of Angling Times winter league semi-finals, divisional nationals, Fish’O Mania qualifiers and Canal Pairs championships' qualifiers and a final. One match which springs to mind was a practice event for one of the Northern leagues (Wigan, I think). At the eleventh hour I was told that as no one was available I would have to do the draw on my own and would get help later on with the weigh in.

The draw was at a small venue called The Wheatsheaf Pub at Soudley. Luckily, it was a fine summer’s morning and with the help of my 14 year-old son we proceeded. I took the money and my son was on the draw bag. We managed to get all 169 anglers to their pegs on time, with me ending up with £1690 in my back pocket, ready for the payout.

An amusing, but very sombre experience occurred at the 1997 Division 5 National held on our club waters in the Goldstone area. In the early hours of the Sunday of the National, Princess Diana was killed in that fatal Paris car crash. It was rightly decided that a one minute’s period of silence before the start would be an appropriate gesture. I, as a senior steward, told the 60 anglers in my section that on the first whistle they should stand by their pegs and that silence would be observed. Then on the second whistle, it would be the all in. The plan backfired with most of the field forgetting the minute’s silence and calmly proceeding to start fishing on hearing the first whistle. 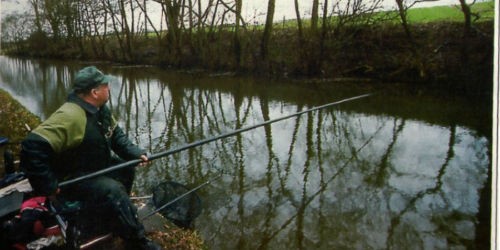 If I had to fish at just one location for the rest of my life it would be the Shroppie at Goldstone in Hinstock Wood. I would fish the long pole, across the canal at 12 metres in about 18 inches of water, fishing the caster for roach and bream. I have had many a happy day there with hopefully many more to come.

My greatest fishing achievement so far would be when I was asked to pick and captain the Shropshire Angling Federation team to compete in the 1990 NFA Division 3 National on the Royal Military Canal in Kent. None of the team of twelve had ever seen the venue, so we relied on some information I had gleaned locally.

It paid off, because my hand-picked team, comprising of what I thought were the best canal anglers in Shropshire at that time, finished seventh out of the 84 teams that took part. Thus it was that Shropshire Federation gained its first and only promotion in its competitive national history.

The match headquarters were at Folkestone racecourse. I will never forget waiting for the result, whilst talking to the Highfield legend’s Mark Addy (now joint England Manager) and Vinnie Smith who, as part of the Highfield team, had fancied their chances of victory. Highfield were one of the very top sides in the country in that era and I could hardly believe it when the bombshell was dropped that we had finished above them. We only just missed out on a medal that day. 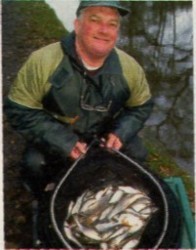 Another highlight for me was when I was top individual in an Angling Times winter league match on the Staffs & Worcester Canal at Wombourne. Admittedly, I drew a good peg at Bumblehole Lock, but still had to do the business against the cream of Midlands canal anglers, with my 9lbs of chub good enough to win the match.

I have had the privilege to meet and fish with some of the stars of the angling world at Goldstone, where we even had former World Champion, Ian Heaps, coming along and giving our members a master class. I’ve weighed in Kevin Ashurst, Mark Addy, Frank Barlow, Dave Berrow, Kenny Giles and the gentleman himself, Mr Ivan Marks, at our open matches, to name just a few.

Although by his own admission not remotely a fishing star, another occasional visitor to my matches in his youth was John Ellis, now the Trust's national fisheries & angling manager. Often he would be accompanied by his brother, Andrew and the young Simon Mottram. Although I don’t recall John catching that much, he certainly taught Motty well, for he has gone on to became a top class match angler, most famously winning the 2014 canal pairs crown with partner Simon Preece. 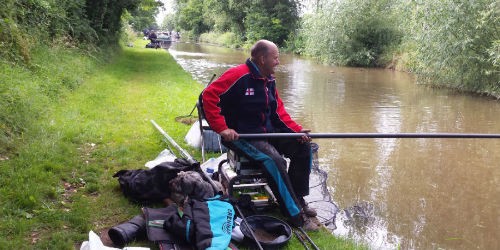 My largest remaining ambition will come about in 2017. Hodnet have been chosen to run the Angling Trust Division 1 National on ours and surrounding canal waters on the Shroppie. My friend Terry Nutt and I will be joint organisers of the event. It will be the first time the Division One, or All England, has ever been held wholly on the Shropshire Union. I can’t wait to see what the cream of angling will pull out of our canal; many surprises I hope.

As for picking a winning team, I honestly believe there are twenty or thirty teams that have a genuine chance of lifting the prestigious title and being known as a diplomat, I wouldn’t want to upset anyone by tipping a winner.