This guest blog article, kindly produced by the chairman of Luton Angling Club, Dennis Hunt, tells the story of the club’s attempts to resurrect its junior section.

When I was a lad, clubs such as ours were inundated with junior members. Nobody foresaw a situation where there would be precious little new blood coming into our great sport and that our club would not even be represented in the national angling championships. As time’s gone by, it gradually dawned on us that we barely had a junior section worth the name. I don’t think angling is alone in struggling to attract the next generation and it’s fair to say that we thought long and hard before taking the plunge to try to reverse the decline.

Back in 2012, Canal & River Trust emerged from the old British Waterways. This somehow seemed to re-energize the Trust’s badly under-resourced fisheries team. Before long, they had published an angling strategy and produced a south-east waterway fisheries & angling action plan.

It was the Trust’s head of fisheries, John Ellis, who finally pushed me over the edge in making the decision to start coaching in a mad moment over two years ago. He sourced funds to sponsor both myself and Mark Brooks for our initial level one courses in return for the club agreeing to hold a certain number of events as part of the Let’s Fish campaign. Without the kickstart that John orchestrated, I’m not sure the development work we have undertaken would have happened.

In September 2016, aided and supported by our canal fishing neighbours at Tring Anglers, we ran a single taster session at The Three Locks on the Grand Union Canal. Tring National Angling Advisory Group member, Dick Pilkinton, kindly volunteered to act as our level two Coach that day. Without his assistance we couldn’t have run the event. Over 30 people attended the initial session, the proof needed that there’s still a market out there for fishing. It confirmed all the hard work put in to obtaining our level one coaching qualifications and the upcoming work to secure our level two qualifications would all be well worth it. Subsequently, several of the Tring Anglers' level one coaches have assisted at our events and we have reciprocated at theirs. 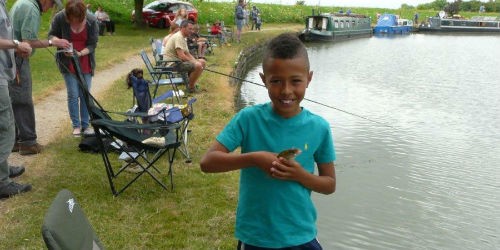 This year we ran eight events, including the Canal & River Trust flagship event at Soulbury and a special session for a Guardian reporter and her son. It’s not often that angling makes the quality newspapers. Our events spanned most of the summer from April to September and were organised using our own qualified level two coaches backed up with four qualified level ones, plus assistance from other clubs. Not all our development work is canal related. We had a tremendous reception at the Easter Country Show at Stockwood Park in Luton. We advertised the club and its work and had the kids playing angling related games. We plan to do more similar events next year.

At our events on the Grand Union and at South Lagoon at Wyboston, we had 133 people attend our sessions. Almost all caught fish, usually more than one, and of course for many children and their parents came the delight of landing their first fish. All left with a positive impression of angling and of our club. Many signed up as Kingfisher (junior) members either on the day or later by other means. We now have the highest Kingfisher membership we have had for many years. Our coaches have also assisted at other Canal & River Trust taster sessions as far away as the West Midlands. 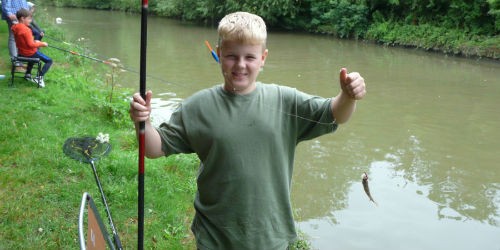 We’ve learnt the importance of effective advertising, especially of targeted Facebook advertising campaigns. It’s an inexpensive and effective way of promoting events to a mass audience and works much better than approaching schools. One memorable night in July, we undertook a session for a cub group in Leighton Buzzard. It went so well the kids didn’t want to go home. Cub leader Matthew reckoned it was one of the best outdoor activities they had ever run, giving us a tremendous write up. Several youngsters signed up as members straight away and have subsequently been fishing again with family members. They’re getting the fishing habit.

Our coaches have grown in ability throughout the year. We are now able to approach the running of events with heightened confidence. We admit to learning a lot this year and making mistakes along the way. There is still so much more to learn, however, we feel we’ve made a very good start. It’s been physically demanding at times and many of us came home exhausted from a day’s coaching, but fully satisfied we’ve done our bit to further the sport. I’ve kept in regular contact with fellow level two coach Simon Mottram. He’s forgotten more about canal fishing than most anglers, including myself, have ever known. Motty has made me realise there’s things I still needed to learn about this most skilful branch of our sport. His video series has been invaluable in helping me develop my canal fishing knowledge. I’ve heard that yet more cutting-edge canal coaching material has been filmed for release next year, which will surely be of enormous value.

We’ve been extremely grateful for the generous support we’ve received from individuals, other clubs, tackle dealers and Sport England, which has enabled us to achieve so much this year.

Worthy of special mention is Mrs Rita Blyth for donating her late husband’s fishing tackle; Barrie Bashford, rig maker extraordinaire; Shaden of Luton for help with ensuring we received exceptional value from our Sport England grant monies; Tackle Shed at Barton for their help and support; Matchbox for assistance with items like rig winders; Stuart at London Colney Tackle for the generous donation of five rods and reels; Oakwood Angling for help procuring further items and providing us with some really nice second-hand items, making our budget go further. Browns in Leighton Buzzard very generously sponsored most of the bait. I should not forget James Lewis at Angling Trust plus our good friends at Tring Anglers. If I’ve forgotten to mention anyone who helped along the way please accept my apologies and sincere thanks.

Has this article inspired you?

If reading this has made you ponder resurrecting your club’s junior angling section, then there’s plenty of help at hand. Assuming your club has a Canal & River Trust canal agreement, do drop the fisheries team a line. They can help source funding toward those all-important coaching qualifications.

Learn how to fish

Take a look at our learn to fish guides to get your started.