Back in the summer of 1966 both the football world cup and the freshwater world angling championships were held in England. Due to the achievements of Bobby Moore’s boys, the English nation was in a state of euphoria. The question on the lips of the nation’s anglers in the lead up to the River Thurne event was whether England’s fishing team could make it a sporting double.

The selection process in the 1960s was very different to the system we have in place today. Back then each of the first five teams in the All England National were allowed to nominate one angler. The sixth placed team nominated the reserve. Often, clubs would select the team member who had caught the highest weight in that match. This is what both Rugby Federation and Coventry & District Angling Association did in 1966. Therefore, following their epic battle in the 1965 All England Dave Burr and Colin Clough found themselves as team mates. Dave was appointed as team captain. Neither Derby Angling Association nor Gloucester United kept with the usual precedent though. Despite Ray Gwinnutt’s third place national finish, Derby A A nominated the 23 year old Ray Hough instead. Gloucester United A A plumped for Terry Gardener, rather than the 17 year old Nicholas Swann who had taken their highest weight on the Kings Sedgemoor drain back in that 1965 National. Notts Federation’s Neil Mumford was the final team member, with Roy Livett as reserve. Team Manager was Coventry’s Bernard Donovan with Bill Platten from Yarmouth, Gorlaston & District A A the local organiser. 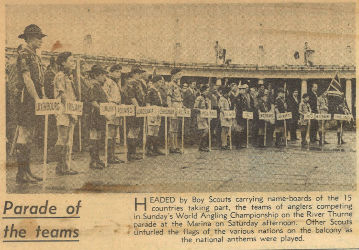 These days the world championships see around 40 teams lining the banks but in 1966 fifteen teams, all from within Europe, took part. East Germany were also due to line up, but for reasons that I have not yet been able to determine, were banned from participating. Looking at the list of nations, Czechoslovakia and Yugoslavia no longer exist as separate entities, while West Germany were of course re-united with the eastern neighbour in 1990. As you would expect on such an important occasion, the Minister of Sport, Dennis Howell, spent the day at the venue. The opening ceremony was held at Yarmouth Marina. 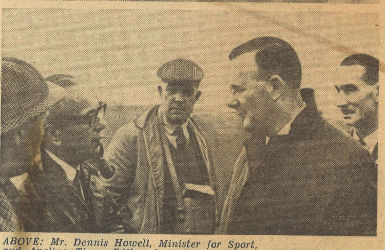 At that time competitors were only allowed to use 15 metres of line; not a problem if using a pole but a major disadvantage for the English rod and line approach. For only the English, Irish and San Marino teams fished with rod and line during the match. The match was three hours long and five points were awarded for each fish and a further point for every gram of weight. Dave Burr recalled practising on his local North Oxford Canal trying amongst other things to master the line limit rule.

It was bookies favourites, France, who justified that pre-match tag by storming to victory with just eight penalty points with their bloodworm based approach.

All five Frenchmen were in the top nine places with two section wins and three section seconds. On top of that Henri Guiheneuf was nearly 2000 points ahead of the field as individual winner. 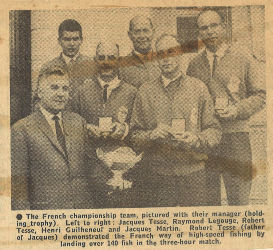 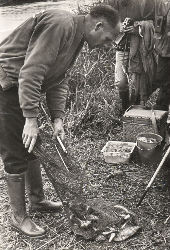 Henri weighed in at 11 lbs 13½ oz. French captain and three times world champion Robert Tesse photo took sixth place whilst his son Jacques ended up in eighth place. I wonder how many other father and son combination have represented their nations in the world championships? 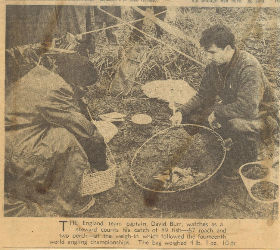 England drew peg 13 and, much to the disappointment of home supporters, ended up five points off the medals in sixth spot. Terry Gardener caught 82 fish and won his section, finishing fourth overall. Captain Dave Burr was eleventh landing 89 fish for 4-1-10 and Ray Hough ended up in sixteenth spot. 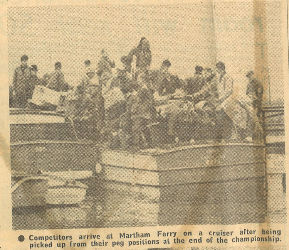 Some critics were disparaging of Neil Mumford’s efforts, but although he finished down in 48th spot, Neil did beat the anglers pegged either side of him. All the written reports of the match are clear about one thing, that Colin Cloughs’ peg was a totally hopeless ‘narrow neck of gin clear water’, with the NFA being blamed for including such a peg. Poor Colin could only muster 3½ oz from this nightmare swim. You can only feel for Colin. The only saving grace is that he would return to HQ by boat rather than having a lengthy walk.

Call to change the English approach

The fact that all the leading teams had used bloodworm as bait, was not lost on the English management. A realisation was slowly dawning that things must change if England wanted to be serious contenders to compete for the world crown. People were starting to realise that there was a need to hand pick the best anglers for the venue and not rely on the current selection process. As was written in the Angling Times, will the swingtippers who did well in the 1966 All England stand any chance in the 1967 match to be held in Hungary? They didn’t know it then, but it would to be another 20 years before Dick Clegg was able to lead a hand-picked England team to world championship glory.

Who would you have selected?

It’s fun to speculate who would have been in contention for England selection in the mid 1960s if the team had been hand-picked back then. 1963 world champion Billly Lane was an obvious contender as were father and son combination Benny and Kevin Ashurst. Leicester’s Ivan Marks would have been in the manager’s thinking too, not forgetting Ray Mumford. Other contenders would include Jimmy Randell, Geoff Kirk, Fred Foster, Ken Booth, Jim Sharp, Dick Ward, Johnny Moult plus future world champion Robin Harris. Who would you have selected?