Gentles on my mind

If you look up 'gentles' in the printed Oxford English Dictionary, the descriptive text says “A maggot, the larva of the meat-fly or bluebottle used as fishing bait." Why the Oxford included this old-fashioned term for maggots is beyond me.

We all get the impression that everything in fishing is new and modern. Things couldn’t be further from the truth and anglers are great at reinventing tackle, tactics and baits. The humble maggot is no exception.

“Keep gentles or maggots with dead flesh, beast’s livers or suet: cleanse or scour in meal, or bran, which is better: you may breed them by pricking a beast's liver full of holes, hang it in the sun in summer time: set an old course barrel, or small firkin with clay in it, into which they will drop, and cleanse themselves in it.”

Not so sure about the "firkin". Let's get out the Oxford again. Don’t worry, it is "a small cask for liquids, butter, fish, etc". Anyway it shows that maggots were very much at the centre of fishing baits as early as the middle of the 17th century.

Just nine years earlier, Izaak Walton made his mark with the 'Compleat Angler' published in 1653. Izaak 'borrowed' from other angling books of the period but nevertheless his advice was sound. He too describes how to breed gentles.

It wasn’t long before the tackle dealers of the time latched on to providing a service for the angler. Around 1700 William Browne, a noted tackle dealer, who sold from The Sign of the Fish in Black Horse Alley, London, advertised his wares. “Maketh all sorts of Fishing Rods, Artificial Flyes and selleth Kirbie’s hooks, the Indian Weed commonly called grass, Worms, Gentles and all sorts of Fishing Tackle."

Later that century Onesimus Ustonson was advertising "gentle boxes" and “worm bags”. For storage and transportation of the maggots, some bright spark came up with the “gentle shoot”, a weird looking cone-shaped contraption with a circular bait tin on top.

As the 20th century dawned and the great era of match fishing was born, the north became the hotbed of competition between rival towns. JE Miller of The Northern Anglers Depot, 19, New Station Street, Leeds was selling “large fat maggots” at 1/- (5 new pence) for a solid pint. By this we can assume that these maggots were measured 'neat' before the addition of sawdust, bran or maize meal. A sample box cost just 8 old pence “carriage paid”. As far as I am concerned, maggots by post are a bit iffy. 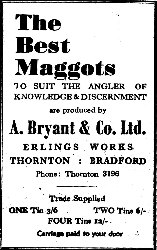 Posting bait (mail order) was a winner for some of the bait suppliers. That is until the Post Office had other ideas. In 1956 Newark Post Office refused to allow maggots by post. The story actually started with Hugh Morton, the well-known maggot breeder from Elston. Mr Morton, a “bluebottle breeder” beat the BBC TV 'What’s My Line' panel, who failed to guess his trade after his little bit of mime was followed by the 10 questions from the panel. Anyway he wanted to send 100 gallons of maggots per week to an outlet in the United States, with the possibility of earning some thousands of dollars for the UK. The Post Office refused to handle his wriggly consignments. A quote from a Post Office Official said, “We will handle bees, silkworms or even leeches, but not maggots.”

One of the largest maggot farm pioneers was Arthur Bryant of Buckingham, winner of the All-England in 1936. He made a packet out of anglers and it was reputed that you could smell him coming at 20 yards, so strong was the maggot stench about him. He once had a factory in Thornton, near Bradford, Yorkshire, which still carried his name, A Bryant & Co, even though he set up his own new business in Buckinghamshire. 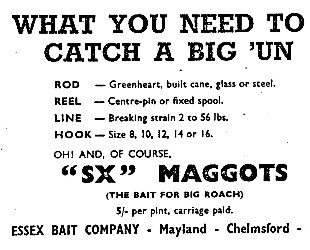 The Essex Bait Company of Mayland, Chelmsford, Essex advertised themselves as the suppliers of “the bait for big roach”. In 1949 they accounted for three 3lb-plus roach, a veritable flurry of 2lb-plus fish and a 6lb 5oz chub taken by Mr Sibley of Hanwell. One of the adverts they placed was a real winner. Take a good look and read carefully. “What you need to Catch a Big ‘Un”. Just buy the tackle, get the bait and off you go 5/- per pint" (25p in today’s money). Well, did you spot the deliberate mistake?

It does say you need line of 2 to 56lbs breaking strain. My word, those maggots must have been on the big side.