To attempt to understand the importance of angling hero Robert Bright Marston we must step back to the late Victorian era. Leave behind your tablet, mobile phone and every other gadget you just can't live without.

Robert Bright Marston had to rely on two key communication techniques to guide anglers and angling forward into the 20th century: the printed or written word and his marvellous ability as a genial organiser, writer and speaker.

Robert secured the editorship of the Fleet Street London Fishing Gazette (which was first established in 1877) during 1879. He became very conscious of the pivotal role he could play as its editor in taking all branches of angling forward. He championed the cause of both game and coarse anglers.

During his lifetime he transformed the ailing Fishing Gazette (pictured) taking it from obscurity to being the most popular weekly angling newspaper read by thousands throughout the world. The Fishing Gazette became the voice of angling. Marston used this powerful position to work with and influence important angling officials and administrators of his day. He remained at the helm until his death in 1927.

Marston spiced up the weekly magazine by almost serialising letters from anglers with opposing views on matters piscatorial. His introduction of new contributors and writers hit the mark. Robert was delighted to get the 1922 exclusive on "How Miss G. W. Ballantine landed the Record Tay Salmon of 64 lbs" penned by none other than Georgina herself.

Through the pages of the Fishing Gazette, Marston introduced the world to Theodore Gordon, the 'Father of American Fly Fishing', who laid the foundation of modern American fly fishing on the rivers of the Catskills. Only recently Robert Marston was inducted into the Catskill Fly Fishing Centre and Museum’s Hall of Fame. 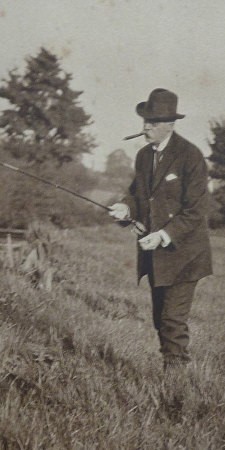 Marston supported the London Anglers Association (LAA) in any way he could. A great friend of Philip Geen, Marston volunteered to convene a public meeting to bring together the two large London associations, the United London and West Central. They united in 1884 to form the LAA under the presidency of Geen.

Marston served as president of the Anglers' Benevolent Society for more than 20 years, thus supporting many old timers who had fallen on hard times. He held the post of honorary vice president of the LAA and appeared in the LAA honours list for those who "have rendered signal service to the Angling Interests, and to the Association generally". For his services, Marston received full life membership.

On behalf of the LAA he managed the London-based Fishing Gazette Fly and Bait Casting Tournaments held at the Welsh Harp in Brent. Sadly, angling is no longer permitted on this venue.

Along with Anglers News editor AR Matthews and Hugh Sheringham of The Field, Marston actively campaigned for the setting up of an Anglers' Defence Fund to combat legislation changes contained in the 1911 Protection of Animals Act, whereby the use of worms and maggots as anglers' baits could have been banned by law. Marston, along with Philip Geen, Jim Bazley and Alf Waterhouse, also played a key role in the formation of the 1923 Salmon and Freshwater Fisheries Act, still the cornerstone of fish and fishery protection today.

Marston had a wealth of knowledge on angling books and fishery-related texts, adding much to the angler's library. In 1901 he compiled the supplement to Westwood and Satchell's 1883 'Bibliotheca Piscatoria', a catalogue of all books written on or associated with angling. He went on to write 'Walton and Some Earlier Writers on Fish and Fishing' plus editing the very famous 1905 Lea and Dove edition of Izaak Walton's 'Compleat Angler'.

In addition, Robert wrote two small pamphlets for the 1893 International Fisheries Exhibition, 'Coarse Fish Culture' and the 'Cultivation of Freshwater fish'. Marston also spearheaded the campaign for the Walton memorial window in Winchester Cathedral. This was finally achieved in 1914 and the Fisherman’s Chapel remains a place of pilgrimage for anglers from all over the world.

On the anti-pollution front, Marston fought for restrictions on road tar that continually found its way into watercourses in times of heavy rain. Marston was awarded a silver medal and diploma at the 1880 Berlin International Fisheries Exhibition for services to angling and literature.

He chaired the Thames Angling Preservation Society (established at Hampton 1838) linking up with angling notaries such as Frank Buckland and Francis Francis. A founder member of the Fly Fishers Club, he held the post of president in 1897 and 1910. A frequent companion of the legendary pike angler Alfred Jardine, Marston's best pike topped 26lb.  He was a great fly fisherman and took trout to 8lbs and grayling over 2lbs.

Marston is credited with being the originator of the barbed shank hook for securing baits like worm back in 1884. In addition, Marston took out a patent for revolutionary celluloid 'artificial' flies.

With salmon anglers in mind, another useful Marston design saw the birth of the Fishing Gazette winch, where the flanges of the wooden spool were made slightly concave to allow braking with thumb or finger pressure. A later variant was the ebonite and aluminium 'Marston Crossle' retailed by the giant tackle firm Millwards of Redditch.

Robert’s legacy lived on with his sons, Edward and Robert, who later edited the Fishing Gazette, and of course his granddaughter, Pat Marston, who married the legendary Dick Walker.

As Nelson Bromley wrote of Marston:

"True to his convictions, true to his friends, and true to himself, he fought his way through many campaigns so often undertaken for the preservation of fish."