The Trent & Mersey Canal offers a great vantage point for viewing the iconic poppy sculpture ‘Weeping Window’ by artist Paul Cummins and designer Tom Piper, which is now on display at Middleport Pottery until 16 September.

Close up of poppies at Middleport

Presented by 14-18 NOW, the UK’s First World War centenary arts programme, Stoke-on-Trent City Council and UK Historic Building Preservation Trust (UKHBPT), the work is from the installation ‘Blood Swept Lands and Seas of Red’, which created huge public interest at the Tower of London in 2014.

We have created a special viewing area on the towpath opposite the poppy sculpture to give visitors an alternative place to appreciate the spectacular artwork.

Over four million people have already viewed the poppy sculpture as it has toured around the country, adorning buildings such as Carlisle Castle, Liverpool St George’s Hall, Hull Maritime Museum and St Magnus Cathedral in Orkney. 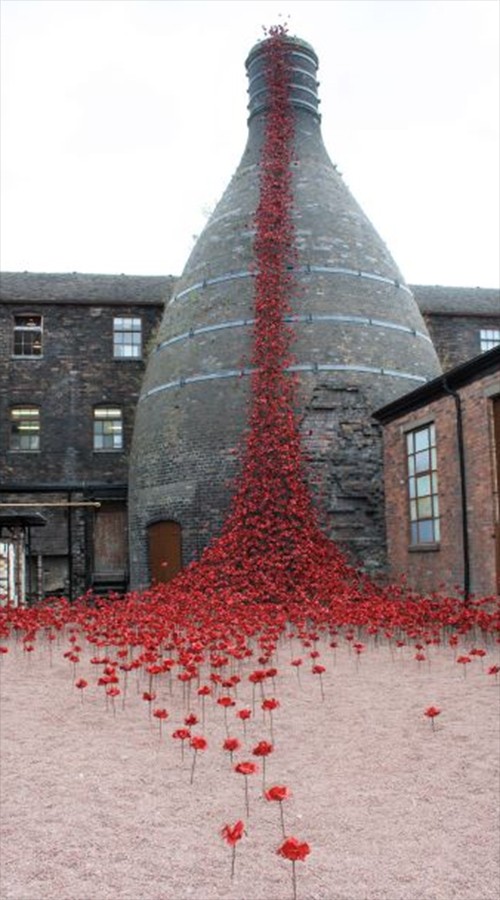 The current location, cascading down the blackened bricks of a bottle kiln in Middleport Pottery, is one of the final stops on a four-year tour before the poppies become part of the Imperial War Museum’s collection. Middleport is a fitting venue for its finale as Stoke companies Potclays provided the clay for the ceramic poppies and Johnson Tiles produced hundreds of thousands of the symbolic flowers for the original installation which numbered 888,246 poppies – one for every British or Colonial life lost at the Front during the First World War.

David Baldacchino, from the Trust, said: "The canal and pottery industry have always been inextricably linked and with this project, the association is incredibly close. We understand Potclays used local canal water to make the clay, which was eventually turned into the ceramic poppies that made up the original installation. It’s wonderful to welcome the poppies home, and as 2018 marks the centenary of the end of the First World War, the moving artwork has added poignancy. We hope everyone will appreciate a chance to see the iconic artwork either from Middleport Pottery grounds or the canal towpath opposite."

Cllr Abi Brown, deputy leader of Stoke-on-Trent City Council and chair of Poppies: Weeping Window steering group said: "Poppies: Weeping Window at Middleport Pottery could only uniquely be of this city where we make art from dirt. And that could only be possible with the extensive canal system in Stoke-on-Trent. It’s how it all began. It’s significant for it to come full circle and for the Canal & River Trust to play such a key role in helping visitors to have such a wonderful canal-side experience of the artwork."

Clare Wood, Middleport Pottery UKHBPT director, added: "It is fantastic for the United Kingdom Historic Building Preservation Trust to work closely with the Canal & River Trust. Both charities, linked here by the Trent & Mersey Canal, also share a role as champions for UK industrial heritage and are both supported by many knowledgeable and dedicated volunteers. What better partners to work together to enable thousands of people to experience the extraordinary Poppies: Weeping Window at Middleport Pottery this summer."

Visitors who wish to view Weeping Window at Middleport Pottery need to obtain free timed tickets in advance. For more information and to book tickets, go to www.weepingwindowstoke.eventbrite.com. A special car park has been created for the duration of the event, signed from the A500 road.