Manchester’s city centre canals have been given a great green biodiversity and wellbeing boost, thanks to our and the government’s Green Recovery Fund.

Over the last 12 months, we've worked with dozens of volunteers, community organisations and youth groups to deliver a community project to green up the Rochdale and Ashton canal corridors running through the city centre.

Alongside the canal towpath, walkers and boaters can now enjoy more wild flowers, spring bulbs, flowering shrubs, over 600 metres of hedgerow and new rowan, crab apple and ornamental cherry trees. Bare concrete lock sides and paved paths have been brightened with the installation of 17 large planters, including rainbow-painted planters in the Gay Village.

A new reed bed has been established in Piccadilly Basin and all along the waterway, there are new pocket-sized community vegetable gardens, linear orchards and wild flower meadows, improving biodiversity for plants and animals, and air quality for local residents and workers.

Training volunteers and young people in environmental skills was a key part of the project for us, which led courses on countryside management, planting, tools and boat handling. Schools and youth groups were encouraged to get involved and appreciate their local waterway by joining in fun activities like pond dipping and paddleboarding. And families were invited to ‘get active and fight plastic’ by taking part in canal clean up walks. 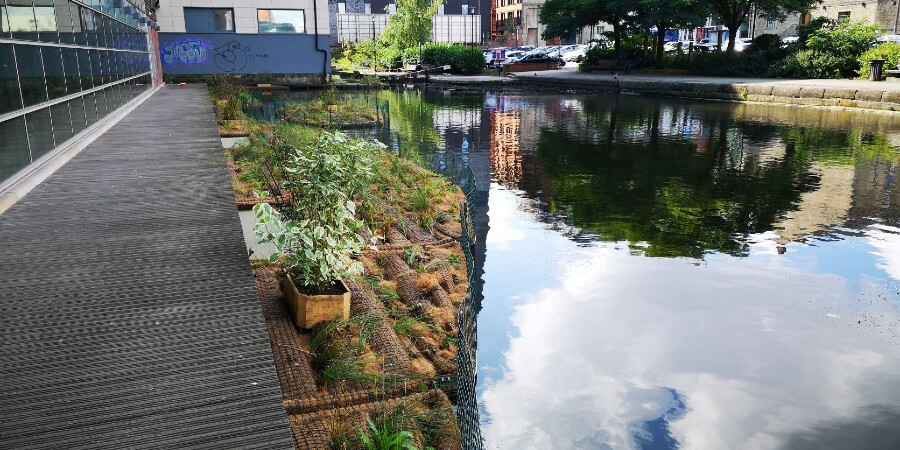 Sara Ponting, our community engagement coordinator, said: “The Green Recovery project has made a big difference for wildlife and the many people who live and work near Manchester’s historic waterways. The Rochdale and Ashton canals provide a peaceful, off-road route through the city centre, which is now greener, cleaner and healthier thanks to the efforts of volunteers.

“Research shows that being by the water makes you happier, and it’s satisfying to make a difference. The volunteers have done an amazing job and their hard work will pay dividends this spring and beyond as visitors appreciate all the trees, shrubs and flowers in bloom. They can rightly feel very proud with what they have achieved.

“Although the Green Recovery funding has sadly come to an end, the project has been such a success that we have applied for other grants in the hope we can continue the great work that has been started here.”

On Friday 11 March, the Lord Mayor and Mayoress of Manchester, Cllr Tommy and Carole Judge, and Greater Manchester Deputy Lieutenant Dr Carl Austin-Behan joined our staff and volunteers to plant a flowering cherry tree at Tib Lock, near the Bridgewater Hall, as part of the Queen’s Platinum Jubilee Green Canopy– marking the 70th day of the 70th year of the Queen’s reign.

Cllr Judge said: “I am delighted to be here on the canal and support a scheme that is leading towards a greener Manchester. The canals made Manchester. Two hundred years ago, they would have been really busy with lots of boats, so it’s great to see the waterway now also being put to other uses.

“It’s projects such as these which allow the people of Manchester to work together towards a greener future.”