This January, a highly skilled team will be starting seven weeks of urgent repairs on Sheffield Lock – a 298-year-old scheduled ancient monument – on the Kennet & Avon Canal in Theale.

The lock, which is two years shy of celebrating its 300th birthday, needs urgent repairs to the brickwork and king posts which support the unusual scalloped walls of the lock chamber. A specialist spider crane will straddle the lock chamber to lift the new king posts into position.

The lock’s status as a scheduled ancient monument means that it is a nationally important site and, as one of only two scalloped-walled locks in the country, a full archaeological report will be conducted throughout the works. Originally a turf sided lock built between 1718 and 1723, Sheffield Lock features scalloped chamber brick walls which were added when the lock was enlarged in the 18th Century.

We are in the middle of a five month £2.5 million maintenance programme on the Kennet & Avon Canal as part of a national £45 million programme of essential restoration and repairs. The lock will be drained on Tuesday 19 January to allow the £282,000 works to take place and, on Sunday 21 February from 10am-3pm, visitors will have the rare opportunity to see the lock repairs for themselves. 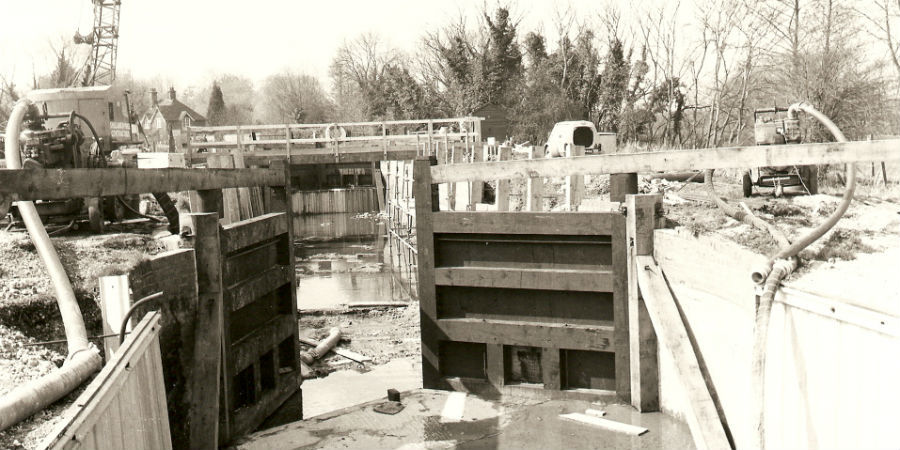 Mark Evans, waterway manager for the Kennet & Avon Canal said: “Our open days are a fascinating showcase which give local people the chance to get a behind-the-scenes look at some amazing craftsmanship. To see the repairs at this 18th Century lock up close and understand the scale of the work we do to care for it is a real privilege.”

Richard Parry, chief executive of the Canal & River Trust, says: “We care for a remarkable network of historic waterways which are still working just as they were designed to over 200 years ago. Keeping them open and safe requires a huge amount of planning, investment and craftsmanship and involves a wide range of experts, from civil engineers and hydrologists to heritage experts and ecologists.”

As part of its maintenance programme, the Trust is working on around 164 lock gates across the country as well as carrying out repairs to aqueducts, reservoirs and tunnels. Many of the Trust’s biggest repairs are carried out during the winter months to minimise the impact on waterway users.

A load of rubbish

In addition to this year’s winter maintenance programme, the Trust has launched a three month survey to record and raise awareness of the amount of rubbish discarded in the nation’s waterways. Across the country hundreds of shopping trolleys, traffic cones, car tyres, bottles and plastic bags are hauled out of the canals by the Trust and its volunteers at a cost of nearly £1 million each year.

More weird and wonderful items such as World War 2 munitions, sunken cars, bank safes, a rocking horse and even a 16ft dead python have also been discovered in recent years. The Trust, which is calling for an end to rubbish being dumped in its waterways, will be announcing the results of the ‘what lurks beneath’ survey in spring 2016.

Sheffield Lock open day will be held on Sunday 21 February between 10am and 3pm in Theale. Last entry into the lock will be at 2:30pm.  The lock is a five minute walk from Theale Station and parking will be available in the car park next to the lock. Please wear sturdy shoes.

Find out more about the open days happening across the country.