We are carrying out a vital £450,000 repair project to a Grade II-Listed shipping lock on the River Weaver Navigation in Northwich.

80% of the cost has been funded by a grant from the Heritage Stimulus Fund, administered by Historic England as part of the Government’s Culture Recovery Fund, which is designed to protect heritage sites and support jobs and access to culture and heritage.

A massive and complex task

Repairing and replacing them is a massive and complex task, with the small lock being constructed on an island in the middle of the River Weaver. Trust engineers were unable to get a crane large enough over to the island to lift the lock gates, which each weigh the equivalent of three African elephants.

Only a small crane, able to remove the footbridges from the gates and the gates quadrants (hinges), was sufficiently lightweight to be floated over to the island on a pontoon. Once the lock gates were detached, they too had to be floated on six airbags and towed down the river by tug to the Trust’s Northwich repair yard, about 400 yards away, where they were lifted out of the river by a large crane.

The new replacement lock gates are due to be floated back up the river and installed early in the New Year and the whole lock re-opened again to boat traffic from the end of January. Once the engineers move off site, the Trust has a team of dedicated volunteers who will be involved in landscaping and improving the iconic double lock, which is a popular pedestrian route connecting  Kingsmead and Sir John Deane’s College to Hartford. 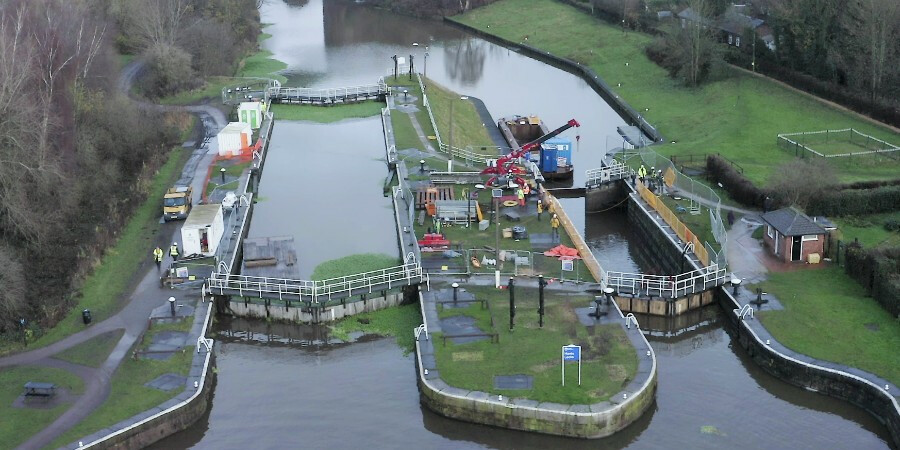 A vital part to our heritage

Simon Harding, our project manager, said: “Structures on the Weaver Navigation are over 150 years old and they are huge – constructed to carry 1,000 tonne, sea-going ships involved in the local salt industry.

“When a lock needs work, it is a significant challenge for our engineers. Access to Hunts Lock has been incredibly difficult, and the depth and complexity of the lock structure has meant we’ve had to bring in a team of divers to help. In 1887, the depth of the lock was increased to enable larger vessels to pass through, but this was done by increasing the height of the lock walls and lowering the bottom of the lock chamber. The gates remained the same size, but with added fittings. All this complicated extra timber and ironwork now needs to be adapted to fit the new lock gates.

“Canals and river navigations, like the beautiful River Weaver Navigation, are not only a vital part of our heritage, they also provide the public with enormous health and wellbeing benefits –they’re just as important now as when they were constructed more than 200 years ago.”

We were allocated a national grant of £1.6 million from Historic England in October through the Government’s Heritage Stimulus Fund, part of the £1.57 billion Culture Recovery Fund and this project represents the Trust’s largest single allocation to a specific project.

Duncan Wilson, Historic England chief executive, said: “Historic places across the country are being supported by the Government’s grants awarded under the Culture Recovery Fund. This funding is a lifeline which is kick-starting essential repairs and maintenance at many of our most precious historic sites, so they can begin to recover from the damaging effects of COVID-19.

“It is also providing employment for skilled craft workers who help keep historic places alive and the wheels of the heritage sector turning. Our shared heritage is an anchor for us all in these challenging times and this funding will help to ensure it remains part of our collective future.”