Working outdoors and exploring water pressure in the canal environment was just the job for a Stourport school when they visited the locks at the beginning of November.

Wilden All Saints Primary School visited the locks as part of their curriculum work. Explorers were able to offer them a tailored visit including a lock demonstration by a Canal & River Trust Volunteer Lock Keeper and a guided trail led by one of our Explorers volunteers. The trail focussed on why there are locks here and how they work.

The class were divided into two groups and whilst one group took a walk around the canal basins, river and locks, the second group carried out an experiment where they measure water pressure as water was allowed to escape from a bottle. The children measured how much water escaped in timed tests, comparing their results and drawing a graph of their results. 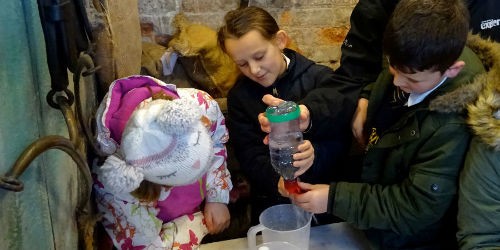 The STEM activity was a simplified version of a key stage 3 Lock Design activity. The group were supported by two Explorers volunteers, who helped children to carry out the experiments.

Results were variable, but it was possible to summarise the best results for the rest of the group and the teacher was able to re-cap later, to help the whole group make the most of their visit and experiments. Class teacher Carole Jones added "we wrote up the experiment and used Excel to create our line graphs, so ticked off an ICT box too!"

The Stourport team is also fortunate in having a model of a lock, which children can help to build and allows them to handle the lock gates and paddles, and see where water flows into the lock. Visiting a real lock allowed them to see how a lock works and the group were excited to see a boat work through the lock at the end of their visit.