Education volunteer, Les Dundon, explains how canoeing is a fantastic vehicle for learning outside the classroom.

During May and June this year, Explorers in the North West have supported the Desmond Family Canoe Trail at week long events aimed at primary schools. Our support allowed the organiser to split large classes into two manageable groups with one group in the canoes and the other doing some Explorers habitats work. 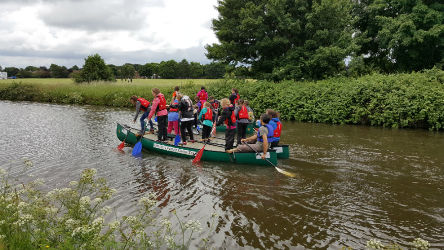 Feedback from both teachers and children has been fantastic, with one child saying, “I want to do this tomorrow and every day forever”, while one teacher sought me out to tell me, “I’ve been doing school day trips for 14 years, and that was the best ever”. At the same time, Explorers managed to enrich the education of over 650 children from urban and inner city schools with half a day of “Learning Outside The Classroom”.

The first event, at the SAFE canoe hub in Bootle, happened during May. SAFE is housed in an old school complex, and has an excellent space for habitats work and pitching the new Explorers Marquee. The canal is quite lively here, so 249 children were able to enjoy half a school day learning new individual and team working skills in the canoes, along with picking up some interesting information and understanding from pond dipping, the Animal Hunt activity and the Habitats quiz. It’s great to see children engage with lessons like this.

The second event involved 207 children at the Burscough Wharf canoe hub. This location is much more public than SAFE’s garden, and the canal is much busier, with little in the way of aquatic fauna so pond dipping was not possible. Fortunately, the canal is a really interesting place to be. So while one half of a class was learning about teamwork in canoes, the other spent 20 minutes on an animal hunt, and 40 minutes learning about the rich heritage of the canal during a walk to Rufford Top Lock. We were inventive, using mile markers and building dates to introduce some maths problems, and taking advantage of the obliging nature of the local wildlife for a bit of animal ID work, but the children were knocked out by watching the operation of the locks. 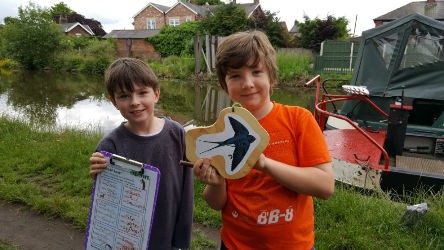 The final event for the summer term took place at the Eanam Wharf canoe hub in Blackburn with another 208 children. Despite being right in the centre of Blackburn, the green corridor is thriving and pond dipping was back on the agenda, with the Animal Hunt spread out along the towpath. Here we see Chris explaining about the swans’ nest opposite the wharf, before moving on to the animal hunt.  Once again, children were engaged enthusiastically with the activities, and teachers were amazed at the versatility of the facility they found right on their doorstep.

All in all, the Desmond Family canoe trail event weeks have been a huge success, with 664 children from 15 schools in 3 completely different towns experiencing the freedom of learning outside the classroom. We managed to cover maths, science, history, PE and, most of all, citizenship.