2016 marked the bicentenary anniversary of the mighty Leeds & Liverpool canal being built. To celebrate this, Explorers took on an equally mighty challenge of engaging 200 schools within two miles of the canal over the course of 2016. Offering interactive local history workshops, water safety assemblies and guided walks, the challenge was to engage school children with the historical landmark on their doorstep.

All about the Leeds & Liverpool Canal

We produced a downloadable resource to help children learn about why the canal was built, who built it and why it took so long to complete. 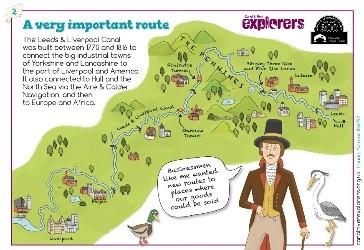 In partnership with the Desmond Family Canoe Trail we ran four canoe schools weeks where children had the opportunity to try canoeing and learn about habitats or upthrust in a science workshop. Over 1000 children took part in activities across four locations: Bootle, Burscough, Blackburn and Wigan.

Ten teachers from Maghull & District Cluster of Schools joined us to learn about how their schools could celebrate the bicentenary of the Leeds & Liverpool Canal.

Children from Priestthorpe Primary School joined the Explorers and Construction team to find out how Bingley Three Rise Locks were made and repaired. Bingley Beavers also had the opportunity to see the huge spider crane (required for the installation of new lock gates) transported along the canal to Three Rise Locks.

The joining of Yorkshire and Lancashire

Happy birthday to you...

Over 500 children lined the route of the canal to see short boat Kennet and its flotilla of boats through their local area – waving flags and singing happy birthday to the Leeds & Liverpool Canal. 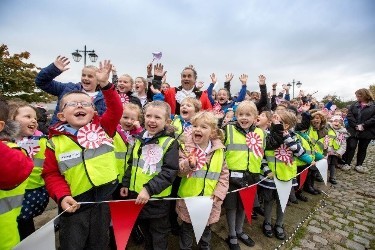 n partnership with The Tetley in Leeds, Explorers worked with artist Jennyanne Smith and year 5 from St Joseph’s Primary School in Hunslet. The children drew what the canal might look like in another 200 years. Jennyanne then incorporated their drawings into boards that were installed in Granary Wharf in Leeds and are now on public display.

And finally…the award for bicentenary volunteer of the year goes to: Les Dundon!

Sefton Explorers volunteer Les was named volunteer of the year at the bicentenary gala dinner and awards evening. Les also volunteers for other teams within the North West Waterway and is a huge asset to the Trust – we’re very lucky to have him.