From the States to the Shropshire Union Canal

Until recently my wife and I spent the winter months in the UK and the remainder of the year in an area in the States just outside Boston.  Ever since 2012 I have volunteered at the National Waterways Museum Ellesmere Port while visiting family in Liverpool. 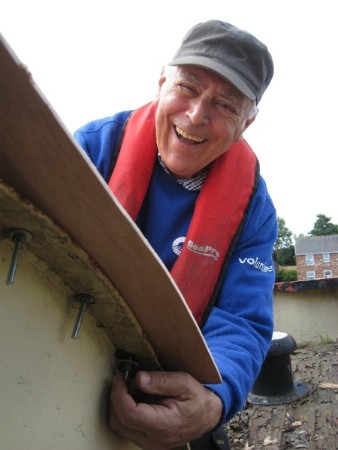 Last summer we sold our home in the States and on Christmas day I moved full time to the UK.  As a volunteer I spend most of my time doing joinery work in the museum boatyard. At the moment I am working on a boat hatch for one of the museum boats, M.S.C. Pelican, and I am frequently called on to help with various other joinery projects associated with exhibits or facility repairs.

With having only volunteered at the museum during winter months I never had the opportunity to take part in any of the boating activities which typically take place during the warmer weather. Because of this I requested permission to join a team during part of their task to move one of the museum's boats, called Shad, to a Heritage Transport event to be held at the Lion Salt Works. Shad is an historic working boat once used to transport goods on the canals in England prior to the existence of highways for motorized vehicles.

The purpose of the trip was to bring Shad to the Lion Salt Works Heritage Transport Festival to give attendees the chance to learn more about the museum, one of the historic boats in the museum collection and the Canal & River Trust itself. Two weeks later Shad was then scheduled to be moved to Lymm for their annual Historic Transport Day.

On the day before the trip I drove from my home in the city centre of Liverpool as I was planning to meet the museum’s boat team the next morning for the segment of the trip from Barbridge to the Lion Salt Works. This section of the trip was about 16 miles including 10 miles along the Middlewich Branch of the Shropshire Union Canal prior to approx. 6 miles on the Trent and Mersey, which could take us up to 10 hours as it included eight locks that we had to negotiate.

Driving in the UK is a new experience for me as I have not yet fully adjusted to driving on the other side of the road yet. I decided to stay overnight close to Broken Cross, near Rudheath and Northwich, to avoid the morning traffic rush so that I would be well rested as the canal trip the next day would be quite long and then be followed by a trip to pick up my car that was left at the starting point of our trip, prior to my drive back to Liverpool.

The museum volunteer team was headed up by Martyn Kerry and assisted by other volunteers Sue Phillips, Nigel Carpenter, Bob Dean and Peter Clark who, along with staff member Alex de Leie, had moved Shad to Barbridge on the Wednesday.  Early Thursday morning they left Barbridge and met up with volunteer Jen de Leie, who most will know as Alex’s mum, Peter Clark and myself at the Venetian Marina for the next leg of the journey towards the Lion Salt Works just outside Northwich. 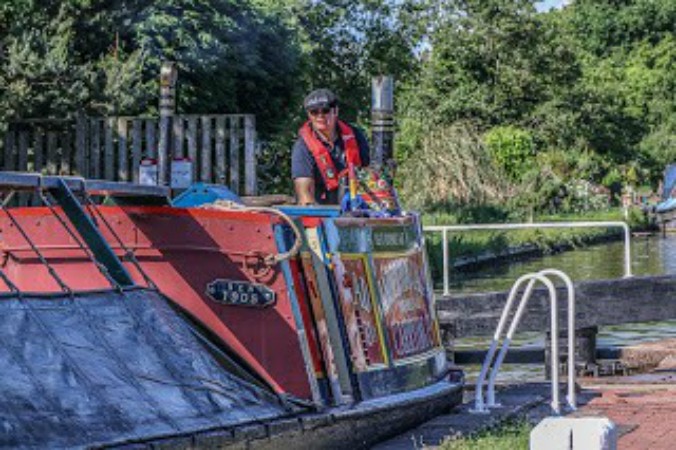 Although I have been fortunate to have experience on many types of small boats this was my first trip on a canal boat through the canal lock systems.

Shad is an interesting and historic canal boat that was used to carry goods on the canal when the canals were a working system prior to the advent of highways in the UK. I also learned that Shad’s hull was built for speed and is capable of traveling faster than the recreational boats that are used on the canal today. The purpose for faster speed was to be able to move goods quickly and more efficiently. Top speed for Shad in ideal conditions can be about 7-8 mph where the slower canal boats typically travel at about 4 mph but on this trip the various helmsmen, under the watchful eye of Alex, kept the speed to a more sedate pace ensuring that no breaking wash was created that would erode the banks. 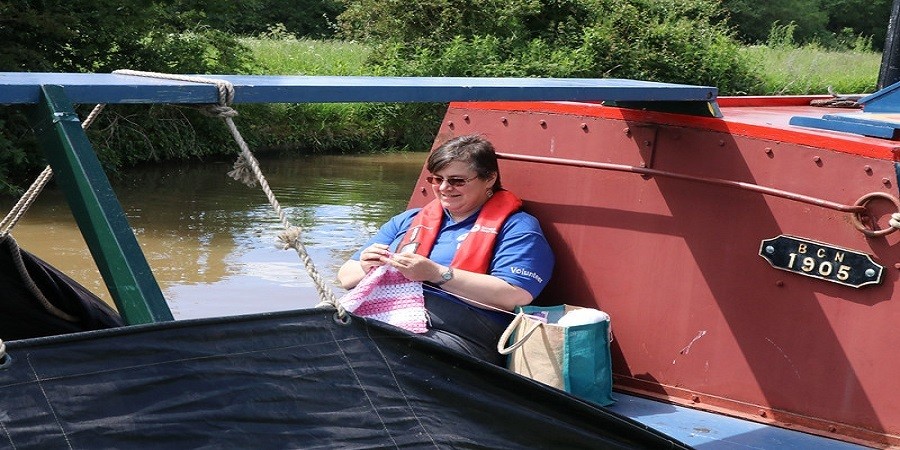 Because of the logistics and duration of the events Martyn and his wife Sue accompanied Shad with their own boat NB Cherokee which serves as their home and also a hot drink and bacon/black pudding butty dispenser. 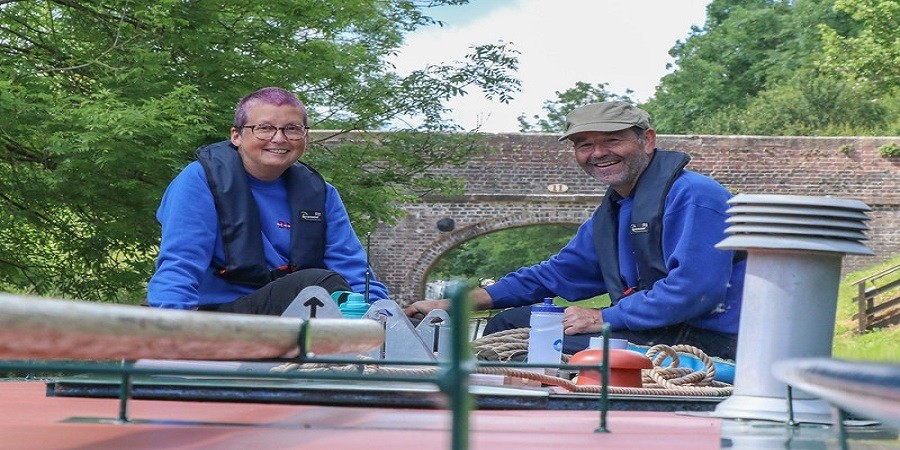 There is a small sitting area at the bow (cratch) that can be covered during periods of rainy weather and is the area that I positioned myself in during part of the trip.  Having the chance to sit here for a portion of the trip I was able to just relax and enjoy the fantastic scenery. I can easily understand why many enjoy canal life as it is very relaxing and therapeutic. 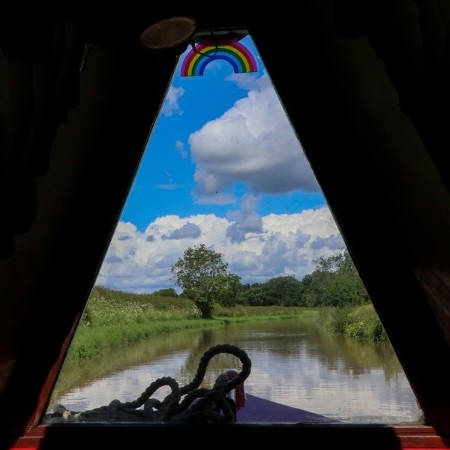 After meeting the team at Barbridge I was given a short safety briefing by Martyn and issued a life vest that would self-inflate should I have the misfortune of falling into the canal. I am pleased to report I did not have the unfortunate pleasure of a canal swim.

I then loaded my foul weather gear onto Shad which fortunately was not needed, my camera gear and a couple of cans of IPA for us to partake in at the end of our journey. I should mention that the crew were well behaved and did not dip into the supply of IPA during the entire trip, however I cannot say the same for the photographer as there was one empty can when mooring the boats at the end of the day.

Although I have volunteered at the museum for over 10 years I never worked any of the locks. On this trip we passed through eight locks but as there were two boats sixteen lock operations were undertaken so I had a chance to learn a bit about the process from the members of the team who are experienced hands with lock operation. 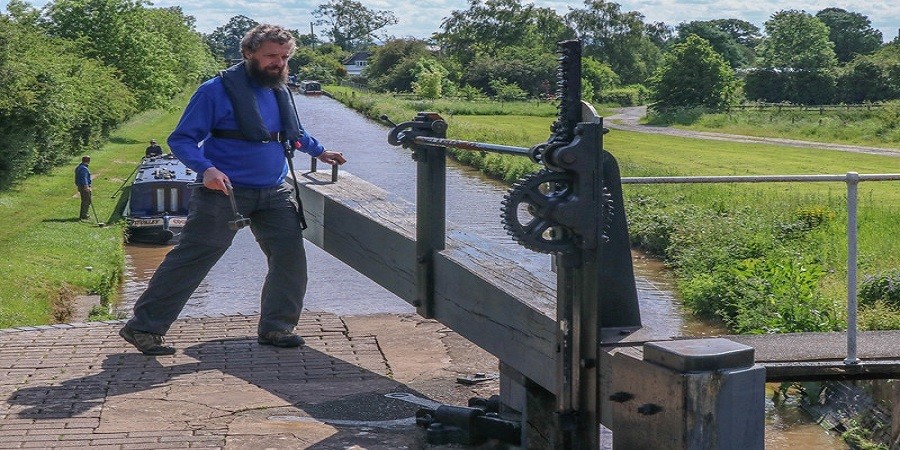 This was a great day to travel the canal as the weather was perfect and there were lots of waterfowl tending their young ones that were obviously only days old. We also passed through several farms where cattle were grazing some of which were nursing their new-born. The bird life and animal life along the canal was amazing.

The architecture along the canal was interesting too. Some of the locks had lock keeper homes and in several locations very beautiful private homes were erected all of which added to the beauty of the canal. Probably one of the most interesting homes we passed belonged to a former boat woman and unofficial lock keeper named Maureen Shaw. The lock is located in Middlewich and officially is named the Wardle Lock but more affectionately called “Maureen’s Lock”. Apparently when Maureen passed away in 2012 her coffin was transported on an old working narrowboat to its final resting place in Middlewich. 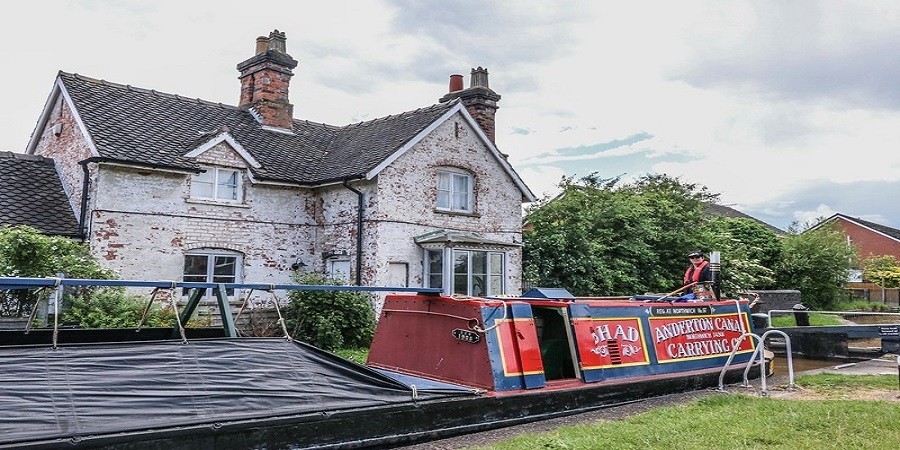 During the trip we passed through historic Middlewich which was the only town we passed through. Middlewich is worth an overnight stay for anyone traveling the canal. For those who are only passing through there are several pubs along the canal where it is possible to moor for a few hours to have lunch and a pint before moving on.

We passed through several large working farms. A few farms raised milk cows, others raised beef cattle and others appeared to be agricultural probably growing animal feed or rapeseed grown primarily as a fuel additive and vegetable oil.

One section of the canal that is not too far from Middlewich was recently rebuilt. The stretch of canal that was repaired is on high ground and when the wall of the canal failed it completely emptied that section of the canal flooding the valley below. This happened when I was back across the pond but I understand the canal community are all aware of not only what happened but also about the financial impact it had on the Canal & River Trust and the effect it had on boating in the area and further afield.

The stretch of the Trent and Mersey canal between Middlewich and Broken Cross (Rudheath) passes primarily through some very beautiful and peaceful farmland. This section of the canal did not have any locks to navigate as the land is relatively level. Around 4pm we arrived at Broken Cross, near Northwich, which is about 90 minutes from Lion Salt Works and an ideal overnight stopping point for the boats owing to its close proximity to a public house that offers good food and a safe mooring for the boats.

Shad was locked up securely for the night and the crews all popped into the hostelry to discuss the days boating before we said goodbye to Martyn and Sue and all made our way back to Venetian Marina to pick up the other car prior to going home.

The following day, with Nigel and Alex back on Shad, the boats proceeded to the Lion Salt Works in preparation for the weekend festival.

A trip of this kind justifiably requires an experienced crew to move museum heritage boats so having asked if I could come along I felt very fortunate to have been able to join the crew during their efforts to move Shad to the Lion Salt Museum. I know that the events attended were a huge success so can see why the museum likes to be represented there. The trip itself involved physical work at the locks, education about the workings of the canal for those of us less experienced volunteers and a pleasant day out amongst good company with a shared interest.

I think I’ll stay this side of the big pond, if you’ll have me!