Following the first project delivery in November 2015, a second project was delivered in July 2016. This was based around the Carpenters Lock redevelopment in Loughborough University (East London).

Budding Brunels is an Open College Network London (OCNL) accredited course that gives young people from a diverse range of disadvantaged backgrounds an insight into the built environment, and provides industry-led careers advice from professionals in the field.

15 young people (16-18 years old) from six schools in the surrounding Olympic borough attended the programme. The delivery was supported by 16 Trust volunteers.

A short icebreaker was completed. Students were split into teams and asked to build a chair from balloons and sellotape. Young people demonstrated knowledge about how to use materials. 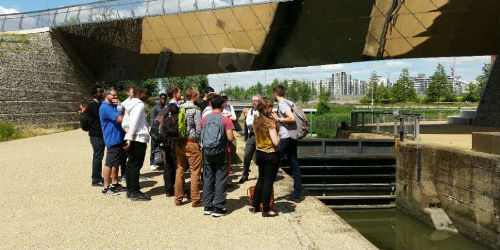 In this exercise teams designed and built a bridge within time and budget limits using lollipop sticks. The young people had to contend with challenges such as, half of the workers going on strike which meant they had to use one of their hands instead of two. Although there was some bickering the groups built bridges which were able to hold the required weights.

Volunteers supported students throughout, suggesting ideas and prompting students to justify their decisions. Students also had the opportunity to network with Day two volunteers.

This was a role-play to encourage students to understand the impact of repair and maintenance works from different stakeholders’ points of view. The panel of young people listened to the advice they were given in preparation, and all perfomed well and enjoyed playing their roles.

Students developed team presentations. They were asked to identify what makes an engaging presentation and demonstrate those presentations skills. The four groups of students presented their ideas to a 'panel' of volunteers who agreed on a winning team and gave individual feedback.

This panel was made up of: Neil Owen, Regional Engineer South; Mark Stephens, Work Development Manager; Chris Pearce and Sonia Blackett. They 'awarded the contract' to the winning group, and provided feedback to each group individually. The students did exceptionally well and answered difficult industry specific questions related to their bridges, both from the panel and students.

After a session on interview technique, students undertook 10 minute interviews with volunteers. Volunteers and staff discussed student performance in interviews which was taken into consideration when allocating work placements and for student feedback. To conclude the course, students handed in their OCNL handbooks, completed evaluation forms and progress webs. They were given construction careers resources to take away.

For more information about how we engage with young people in our programmes, and how you can get involved

The youth engagement team supports colleagues across the Trust to engage more young people in their work. We provide guidance to local teams and work together to deliver a range of projects to meet the needs, interests and aspirations of young people and the strategic priorities of the waterway. We endeavour to raise the Trust’s profile and reputation within the youth sector and work with a number of national partners to offer a wide range of activities for young people.