David Baldacchino is our waterway manager for the Manchester & Pennine region. He looks after around 143 miles of miles of canals and rivers, including some of the areas that flooded after Christmas. Here he talks about the repair efforts and how we’re prioritising the work 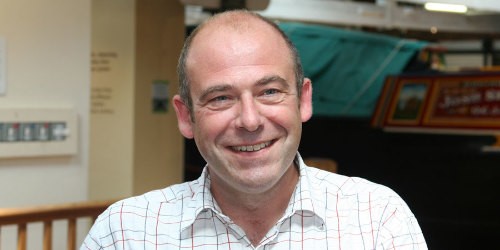 It was obvious straight away that things were so much worse than they had been in 2012. As well as the bits of towpath that had been washed away there were great lengths of canal embankments that had had suffered. One has been washed away completely.  There is a landslide near Lock 15 on the canal – fully grown trees that had been on the side of the hill now stood up vertically blocking the canal, a resident having lost part of her drive down the bank. On the towpaths there was mud everywhere.

With any emergency you just need to make sure that people will be safe. Huge numbers of people want to come out and have a look. In the first couple of days we put a lot of effort into getting barriers up on the towpath where it just wasn’t safe for the public to be walking.

After that you need to check what the floods have left. Is it OK?  What’s the condition?  As the water lowers we’ve been able to see a lot of the damage for the first time.

We also had to think about what we needed to do for the people who may be stuck on the canal. Were they going to be ok, what did we need to do for them?

Straight away we knew that the right thing to do was to get the towpaths reopened as quickly as possible where we could. It’s helped a sense of normality to return, to allow people to use the paths again we’re playing our part to help local communities get back on their feet.

After that its people working out just what’s going to be needed to fix things. Only last week we discovered a sand bar that had been formed in Standedge Tunnel, which we’re going to have to dredge before boats can go through. There’s lots of hidden damage and as the repairs get started, we may well find more.

We have been really lucky that lots of volunteers have wanted to come and help us.  As I write this, we’ve been able to reopen the towpath over the first 10km from Sowerby Bridge which is great, and that’s thanks to a huge collaboration between our teams and volunteers who we wouldn’t have been able to do this without.

The spirit at work parties has been great. In sometimes cold, windy and wet conditions people have carried on helping with the first stage of our repairs in great humour and enthusiasm. A great spirit!

More fromRebuilding canals in the heart of flood-hit communities