Don and Donald at Dundas Aqueduct

Say hi as they go by - Don & Donald, Dundas Aqueduct

People talk about middle-aged and old men in lycra! Hah, I do wear lycra – but not because it's flashy, it's because you dress for what's comfortable. Lycra is lighter, much easier on the saddle and the shirts don't get sweaty.

Don and I are mates - we're both retired. We've been cycling for a long time now, although there are a few more aches and pains than when we were younger. We joined a cycling club called Falmouth Wheelers, and the two of us go cycling together most Sundays and Wednesdays as well.

Quite often we set off from Falmouth where we live, and take the bikes with us in my motorhome. On this trip we just stayed three nights in Exeter and now we're staying three nights in Bristol. Coming from home at the seaside to cycle canals is so different for us. There aren't the big hills we get in Falmouth, and the best thing about cycling canals for me is that it is traffic free.

We've come from Bristol this morning. It was nine o'clock when we left the city and it's a quarter past one now, so that's quite slow going. We've seen lots of cyclists tearing along this morning. I don't think they were interested in the nature on the canal, probably because they were racing to work. Some cyclists go like bullets. We're definitely slower than them and make sure we don't knock people over on the towpaths. 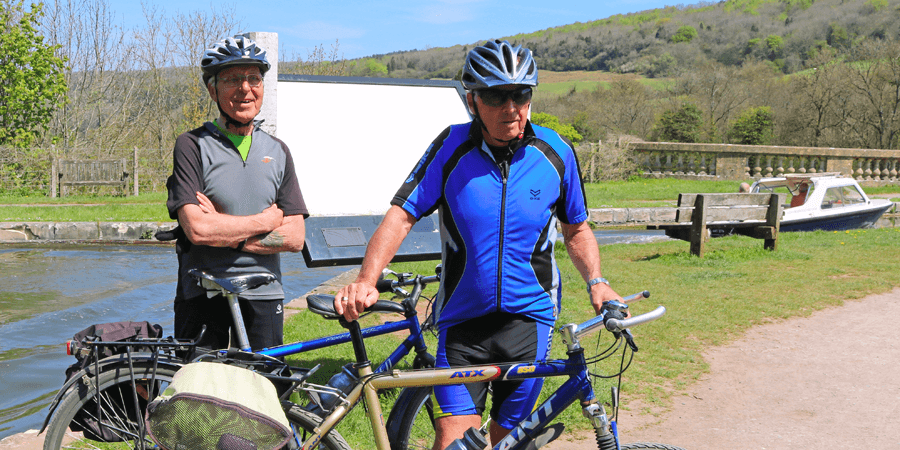 Talking about how slow we are, we'd better watch out because we've got to get all the way back yet! It's another five minutes to the café from here and we're desperately hungry!