A former Lance Corporal who served in the Falklands and suffers from anxiety and anger issues has spoken of how he hopes a canal restoration project will help him discover his former self.

The second phase of Heritage Heroes, which offers injured servicemen and women the opportunity to re-build their lives by transforming and restoring historic canals, has begun in Pocklington, Yorkshire.

One of those taking part in the Pocklington project is Army veteran David Simpson, 57, of Derby.

David joined the Army in 1977 and became a Lance Corporal with the Royal Electrical and Mechanical Engineers. He also served for three years with the Army Air Corps in the Falklands and did a tour of Northern Ireland.

"The Falklands are where my main problems started. But it wasn’t until 28 years later that I finally sought help for them," father-of-four David explained.

"Whilst I was stationed in Fitzroy, I witnessed something horrible – a needless, senseless death. I haven’t been the same man since."

David, who left the Army in 1988, was later diagnosed with Post Traumatic Stress Disorder and experiences severe anxiety and anger issues on a regular basis. He has struggled to hold down a civilian job and has had more than 40 jobs since he was discharged, most as a lorry driver. 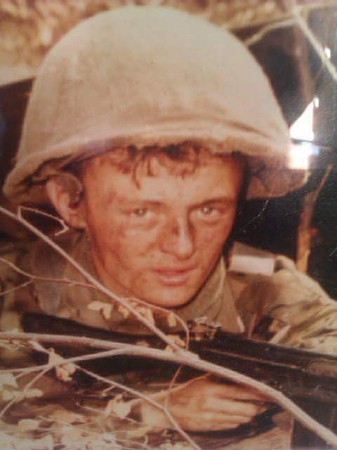 "I’ve had countless jobs since leaving the Army and they’ve all ended the same way," he added. "My anger and anxiety just kept getting the better of me.

"I was never able to relax and I used to work extremely long hours so that my mind was occupied; the longer I worked, the less time I had to think. Sometimes I worked for 70 hours a week but a job never lasted more than a few months."

Things came to a head for David when he was due to drive in snowy conditions and became convinced he would have an accident. He broke down and it was then that he turned to Combat Stress for help, where he was later diagnosed with PTSD.

"It was a weight off my shoulder to finally have a diagnosis," he said.

I have lived like a hermit for years now and that is why I am doing the Heritage Heroes project; I want a better life for myself. I’ve had 28 years of total stress and now I want to look forward.

"I have always been a keen Angler so this is a project fairly close to my heart; it is important to me that our canals and rivers are well looked after.

"I am working hard every day to make each day better than the last."

David has spent time at the Help for Heroes Recovery Centre, Phoenix House in Catterick, where he completed a Health and Safety and First Aid course and said he benefitted from spending time with wounded, injured and sick servicemen, women and veterans, something he is looking forward to experiencing again in Pocklington.

"I don’t socialise with others too much so I know this is going to be so good for me," he added.

"I know there is life after PTSD, it is not all doom and gloom. This course will give me more confidence and a better outlook on life.

"Working on the canals and doing something that is making a difference to me and the environment is brilliant.

"But most of all, I’m looking forward to finding my old self. Once I find him, I plan on keeping hold of him."