We have won a major engineering award for our sympathetic restoration of a historic Grade II Listed footbridge across the Trent & Mersey Canal in Middlewich, Cheshire.

ouCanal engineers Tania Snelgrove, Ian Draycott and Helen Braidwood have been presented with a coveted heritage award from the Institution of Structural Engineers (Midlands), for a partnership project that also involved specialists from Arcadis, Kier and deHavilland.

Big Lock Footbridge is over 100 years old and provides an important pedestrian crossing point across the canal. We carried out a £330,000 restoration after the bridge had to be closed for safety reasons. A temporary pedestrian crossing was installed alongside it and we created a special cradle to lift the old bridge safely onto a low loader. The elegant Victorian structure was then transported to a specialist firm for grit blasting, followed by a sensitive and detailed restoration. It was then craned back in and re-opened to the public this June.

Tania Snelgrove, our project manager said: “We are delighted to be given industry recognition for what was a challenging restoration. The old bridge was badly corroded, so our engineers had to come up with innovative ways of preserving as much of the original steel structure as possible whilst ensuring it could still carry modern loads. Some weathering is clearly visible but unique historical features, which were too badly rusted, had to be replicated.

“The structural elements were all painted black, as in the original colour scheme, including the new ‘U’ frames which strengthen the bridge. The new mesh on the parapets is the same woven mesh used at the Eden Project and is so light that it appears to vanish when viewed from a distance – allowing the structure to appear very much as it did over a hundred years ago.” 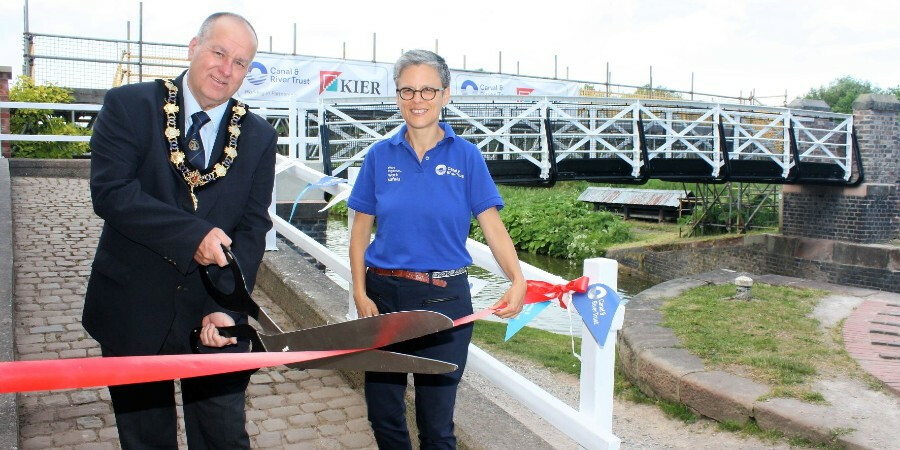 A big thank you

Cllr Mike Hunter, chairman of Middlewich Town Council, said at the opening: “Thank you to the staff and volunteers of the Canal & River Trust for all the work they do throughout the year and especially for this restoration. The canal plays a very important part in our town both historically and financially. The Trust has ensured that a key part of our town’s history will continue well into the future – and they deserve a great deal of credit for this in these times of financial hardship.”