The team were presented with the prestigious award at Tuel Lane Lock on the Rochdale Canal, which is the deepest lock in Britain.

The prestigious annual award is open not only to lock keepers, but to all waterways staff who have offered outstanding assistance to waterways users and is voted for by members of leisure marine trade association, British Marine Inland Boating.

Tuel Lane Lock on the Rochdale Canal in Sowerby Bridge, West Yorkshire, is the deepest lock in Britain and one one of our most remarkable.

Nigel Stevens, member of British Marine Inalnd Boating and director of Shire Cruisers, said: “With more people than ever choosing staycations this year, we’re having a bumper season. The Canal & River Trust team has been a great support, going that extra mile to welcome lots of newcomers and novice boaters to the region’s waterways and help them have a great experience.”

He added: “Boating is such a fantastic way to see Yorkshire, not only all the different places, but also from a different angle. It’s such a contrast to normal life. Boating forces you to slow down, it's really relaxing and takes your mind off the everyday worries.”

Sean McGinley, our regional director for Yorkshire & North East, said: “Lock keepers, many of whom are volunteers, are the ‘face of the canals’ and play a vital and iconic role within our charity.

Lock keepers have been a presence on Britain's canals for hundreds of years, although the role has changed over time. Today, they help to look after the nation’s beautiful waterways, assist boaters on their journeys, provide information and advice to visitors on the towpath and maintain historic locks.

We are hugely proud of the team and to be able to bring this award home to Yorkshire is even better!”

Lesley Robinson, British Marine CEO, added: “We, at British Marine, are delighted to support this fantastic award acknowledging the hard work of the lock keepers across the UK. With the rise in staycations and more and more people taking to the water, the safety of the locks and canals and friendly service offered by lock keepers is paramount.

Many congratulations to the Canal & River Trust team in Yorkshire.”

No two days are the same

Ian Kelshaw, our Lead Volunteer and part of the winning team, said: “I didn’t have any connection to canals before I started volunteering at the Trust over five years ago and now I’m part of a brilliant team of lock keepers doing something I thoroughly enjoy.

It’s a really interesting role, where no two days are the same. I’ve learned so much and love being outdoors, it’s great for my wellbeing. Helping look after Britain’s deepest lock, it captures your imagination and attracts lots of boats and visitors just coming to have a look and see what it’s all about. It’s great!” 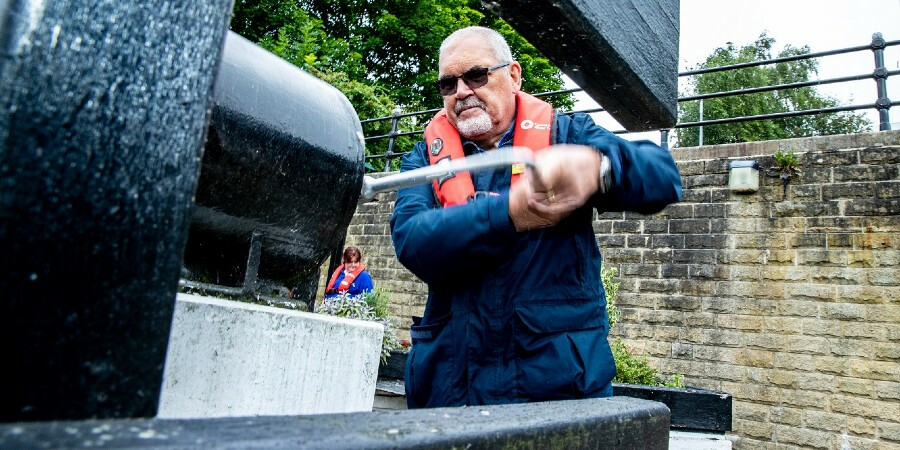 Tuel Lane Lock on the Rochdale Canal in Sowerby Bridge, West Yorkshire, lowers and raises boats almost 20ft (6m) as they make their journeys over the Pennines. For comparison, a typical double-decker bus is 4.4m.

Unusually, because of the depth of the Tuel Lane Lock and its proximity to a canal tunnel, members of the public are not permitted to operate the lock mechanisms themselves. Instead, the award winning lock keepers help crews to negotiate the gates.

The lock is so deep because it does the work of two. Built in 1996 during restoration of the Rochdale Canal, it replaced a pair of earlier locks to enable the canal to tunnel under a road built on its original level and provide a more efficient route.

The height of popularity

Britain’s canals are more popular than ever before, with more boats using them than at the height of the Industrial Revolution.

The research, published on 7 July 2021 and commissioned by ourselves and British Marine, provides a preliminary exploration of the wider social value associated with boating on inland and coastal waters. Frequent participation in boating and watersports compared to moderate participation is associated with anxiety levels 15% lower and a life satisfaction value of 7.3 on a scale of 0-10 (6% higher).