UK artist Lucy McLauchlan has this week begin work on a major 80-metre mural in the historic Diglis Oil Basin in Worcester.

Opening the Floodgates is expected to be completed in October and will be an exciting addition to Lucy’s body of work that has seen commissions adorning multi-story buildings across Europe, gigantic billboards in China, huts in The Gambia, windows in Japan, walls in Moscow’s Red Square and a Norwegian lighthouse.

Lucy’s mural will serve as the finale of the The Ring, an arts programme celebrating the region’s waterways. The project has seen a series of new works created by local and internationally celebrated artists this spring and summer, in response to the 21 miles of waterways encircling Droitwich and Worcester, namely the Worcester & Birmingham Canal, the Droitwich Canals and the River Severn.

With help of the Canal & River Trust, Lucy has explored inside the basin using an underwater camera to document previously unseen life hidden below, such as molluscs, zebra mussels, fresh water sponges and various colourful lichen living on the vibrant orange rusted metal piles that line the basin.

Inspired by this underwater ecology and the stories of the people who have, and continue to, live and work on the waterways, the temporary mural has been designed so that anyone visiting the area will be able to see it from the walkways around the basin.

Lucy’s internationally acclaimed, large-scale monochromatic paintings combine ancient, almost prehistorical influences with graphic, modernist sensibilities. She has exhibited in galleries, museums and festivals across the globe, creating work using a ‘one-take’ philosophy that rejects extensive preparation using digital tools. In the UK, Lucy infamously created the ‘Todo es posible!’ mural in 2010 on the outside of the former brutalist Birmingham Central Library, while four of her works are in the Victoria & Albert Museum permanent collection. 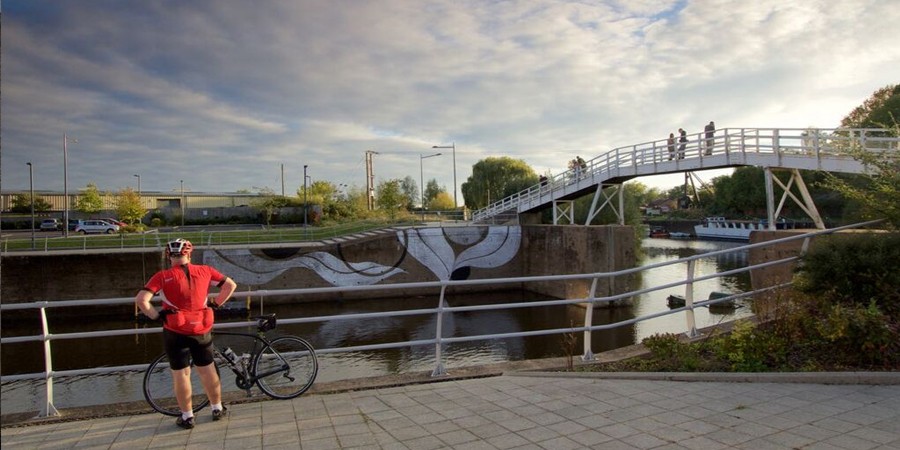 Lucy McLauchlan said: "My studio in Birmingham is based on the canal. I’ve witnessed its lure as an escape and quiet space for many people. My immediate environment is a huge inspiration in my work.

"From my previous project painting murals along the canal-side in Birmingham, I got to know the waterway by canoe. Being on the water gave me a different and new appreciation of the canal. I’m looking forward to discovering the waters of Worcestershire and getting to know its communities, as I’m working in their ‘back garden’."

Street art star Banksy, whose work can be found along several canals in the UK has praised Lucy’s work. Steve Lazarides, former gallerist to Banksy, has represented Lucy McLauchlan since 2007. He comments: "Watching Lucy at work on her large-scale murals is fascinating. Lucy is one of the few female street artists who have successfully managed to make a name for themselves. It’ll be great to see how she approaches this new commission and bring her work to new audiences."

Cathy Mager, artistic director of The Ring, says: "We’re delighted to be launching this major new public art landmark for Worcester by a West Midlands based artist.

"This extraordinary aquatic mural explores important ecological and environmental aspects of the local waterways. We encourage the public to visit and enjoy the artwork’s ever changing appearance as water and light levels fluctuate and shift."

The Ring is part of our Arts on the Waterways programme, a collaborative arts programme situated on and inspired by waterways in England and Wales.

Tim Eastop, executive producer of the Trust’s Arts on the Waterways programme says: "It’s great that Lucy is bringing her talent, imagination and ambition to the river. We always say that things slow down by water, they are calmer and more reflective, so I’m hugely excited to see how this reflected in her work."

Arts on the Waterways

Find out more about our Arts on the Waterways programme

A new arts programme celebrating a 21-mile circle of natural and historic waterways, find out more