Visitors to towpaths across the nation are being urged to be considerate to other members of the public when enjoying the UK’s great outdoors, as a new poll shows the nation could do with brushing up on its outdoor manners.

"We can all make a difference to someone else’s day, and ultimately the overall experience people have when on the towpaths."

The poll, commissioned as part of our Share the Space, Drop your Pace campaign, asked people what irks them when in public places and whether they themselves are guilty of a few when out and about. The research reveals what the public believe constitutes common courtesy in 2016, including ‘modern manners’ such as not invading other people’s personal space and not having your music too loud on headphones.

Visit our Share the Space, Drop your Pace pages.

Amongst the top bugbears were cyclists speeding past people when they’re walking (23%), pet owners not cleaning up after their dogs (56%), people taking up too much space on footpaths and walkways (25%), not having an awareness of personal space (19%), and people not concentrating on where they’re going because they’ve too busy looking at their phones (27%). 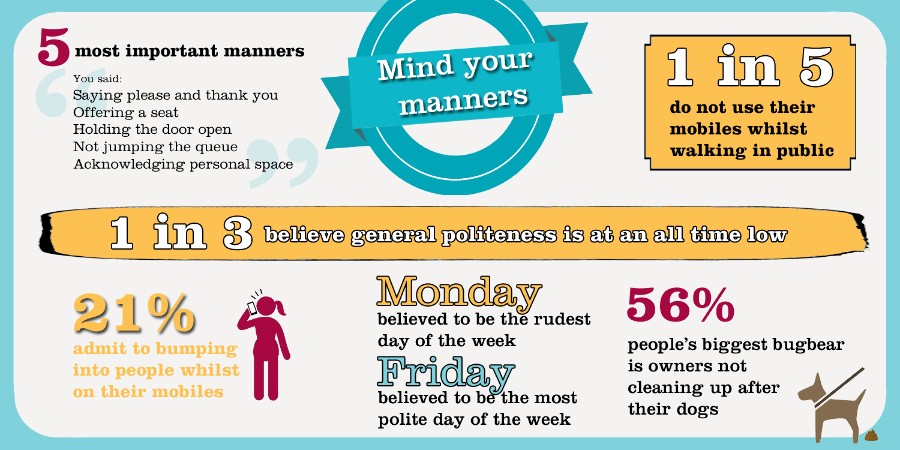 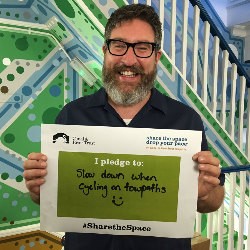 The findings also point to a national tendency for ‘manners mirroring’ with more than three quarters of the public admitting they are only polite to a person if that person is polite to them first (77%).  With 1 in 3 people (33%) believing that general politeness is at an all-time low, we want to make the towpaths a haven for good manners. We asking people to take the lead and set the example for good manners by pledging to improve the harmony and politeness on the nation’s waterways. Simply make a pledge to change your manners for the better and share on social media using #SharetheSpace.

Dick Vincent, national towpath ranger, explains: “For many people our towpaths are among their most precious green spaces, antidotes to the pace and stress of the modern world and places to relax and unwind. They are ‘super slow ways’, providing a slice of peace and calm through the centres of our busiest cities.

“With so many people enjoying our towpaths, it’s important that we all make an effort to be considerate towards one another to keep them the special place they are known for. We can all make a difference to someone else’s day, and ultimately the overall experience people have when on the towpaths.

“Don’t wait for someone to be nice to you before you are nice to them!  Whether cycling, running, walking, mooring your boat or fishing, please help by being considerate of others, slowing down and remembering we are all there to enjoy the space in harmony.  If you’re in a rush, the towpath is not the best place for you so please choose a different route.”

During 2015, 385 million visits were made to our towpaths by walkers, cyclists, boaters, anglers and runners, a huge number considering they were originally built for horses to tow boats laden with goods.

To help remind people to improve their manners, messages have been sprayed onto the towpath in the busiest areas around England and Wales to encourage people to ‘smile and say hi as you go by’ and to remember that they are entering ‘a hat tipping zone’, a nod to times past when people tipped their hats or doffed their caps as a sign of respect or merely as a greeting.  Visitors will also be able to soak up wise words from Canal Laureate Luke Kennard who has penned a poem to help tackle towpath troubles.

See what other people are saying: