A historic Grade II* listed canal warehouse at the head of the Peak Forest Canal in Whaley Bridge has been given a new lease of life and a dedicated band of volunteers.

We have carried out vital repairs to the Transhipment Warehouse to make the roof of the 200-year old building secure and watertight. The project also includes dredging of the narrow boating channel inside the warehouse which will make it possible for a canal boat to moor once again in the Peak District stone building.

The £100,000 project, funded by us and including a £10,000 grant from High Peak Borough Council, means the historic warehouse can now be re-purposed from an empty shell to a vibrant new heritage craft skills centre, courtesy of a dedicated band of volunteers, led by Neville Clarke and Gemma Roe.

Whaley Bridge Canal Group has formed a community interest company to convert the warehouse into a thriving centre of excellence for traditional crafts. The new High Peak Heritage Crafts Centre launched on the first weekend in August, with a special open air market offering craft workshop taster sessions and live music. This marked the first anniversary of the Toddbrook Dam emergency last summer.

In September, the group plans to open a permanent base at the warehouse, providing public courses in pottery and ceramics, ironmongery, green woodworking, silver-smithing, glassblowing, glass artwork, textiles, wool, weaving and ropework. 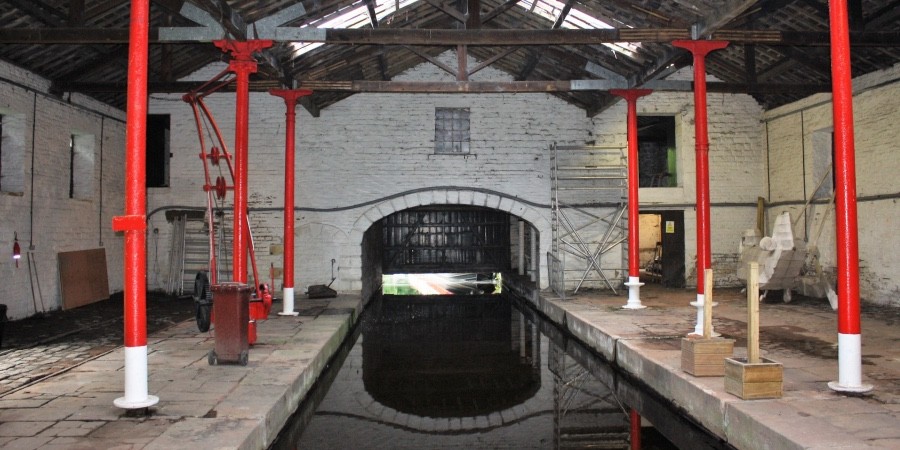 In preparation, the volunteers have been working hard to upgrade and paint the warehouse interior, create new outdoor picnic benches and landscape the waterside grounds of the beautiful canal basin.

Gillian Renshaw, Whaley Bridge community engagement manager, said: “It has long been our ambition to safeguard this wonderful old canal building and give it a new lease of life.

“We are delighted to have worked closely with the Whaley Bridge Canal Group to rescue the historic warehouse and give it a modern purpose preserving and teaching traditional heritage craft skills. It is a fantastic outcome for a building that was once the beating heart of commercial waterborne trade in the 19th century.

“Built in 1801 and extended in 1832, the warehouse would have been a scene of constant activity, with boats loading and unloading inside the warehouse, protected from the weather by the interior channel. The success of the canal trade in limestone, manufactured and raw goods, led to Whaley Bridge developing from a small hamlet into a thriving town, so it’s fitting this important part of our heritage is preserved for future generations to enjoy.”

A bright future ahead

Neville Clarke, founder of the Whaley Bridge Canal Group, added: “This is a combination of so much effort and goodwill from a dedicated team of volunteers, a lot of trades people and businesses over the years, as well as the faith in us shown by the Canal and River Trust. We've got a bright future ahead at the Transhipment Warehouse and so has Whaley Bridge. We're creating a new history for the building and the town, and a fantastic asset for the whole community."

One year on from the Toddbrook dam emergency, we have completed interim repairs at the reservoir to make safe the damaged spillway. A public consultation in September will give residents an opportunity to comment on options for the long term permanent repair which is expected to start in spring 2021 and take a couple of years. The reservoir will remain drained until the planned reopening in 2023.

Follow all the updates to Toddbook Reservoir repairs and restoration here