The historic flight of locks at Caen Hill has reopened, after a lock paddle left open on the Kennet & Avon Canal in Devizes allowed thousands of gallons of water to wash away sections of towpath and canal bank earlier this year.

The £235,000 repairs have taken eight weeks to complete, and involved rebuilding large sections of the towpath and embankment. More work, including installing a new fence and planting a new hedgerow will continue into the new year. 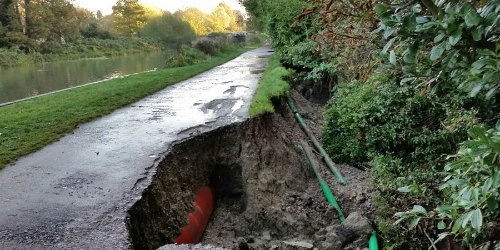 The damage was caused after the paddles of Kennet Lock – at the top of the famous Caen Hill flight – were left open overnight, allowing thousands of gallons of water from the 15 mile pound between Devizes and Wootton Rivers to overwhelm the iconic locks, washing away a significant part of the towpath outside the town.

Open in time for Christmas

Mark Evans, waterway manager at the Canal & River Trust, said: “We’re really pleased to be getting the canal and towpath open again in time for Christmas, as it’s the perfect place to walk off your turkey.

"The team will still be around into the new year finishing things off, and we’re also hoping to start work again in February to resurface part of the towpath in partnership with Wiltshire County Council, so we will have a better surface in the end than the one we started with. We really appreciate the support from everyone around the canal while the work’s been going on.”

Could you spare a few hours to make your local waterway a nicer place for everyone to spend time?